Canada’s fastest all-time marathon runner, Lanni Marchant (2:28:00), who calls Chattanooga, TN home will be racing the Scotiabank Vancouver Half Marathon this Sunday, June 21st. She is one of the favourites and is coming off of a strong performance at the New York Road Runners (NYRR) New York Mini 10K from the June 14th edition of the event. She placed 10th behind an outstanding field of top calibre athletes. She crossed the line in 33:11, while splitting half-way in 16:16. “Yes after racing the NYC-Oakley Mini 10K last weekend, I’d say my fitness is coming along well as I continue to focus on my strength and build my mileage for the Glasgow Commonwealth Games,” said Marchant when asked about her fitness leading up to the Vancouver Half.”

Marchant finished amongst a strong group including her American counterpart Deena Kastor who holds the USA’s fastest marathon time of 2:19:36. Kastor, now a master finished in 33:17, while Lauren Fleshman finished in 16th place in the time of 33:43. Sara Hall was one better than Marchant recording the time of 33:02, while having split 5K in 16:04 – Marchant ran a slightly faster second half.

Molly Huddle won the race while running to a new personal best time by finishing in 31:37. Huddle told Athletics Illustrated, “I was not sure if that time was possible on a hard course and humid day but figured that is around what the winning time would be based on past wins at the Mini. I planned to hang on to the leaders for as long as possible and see if I could kick from there. Next up is the USA 5,000m on June 27th and Monaco 5,000m July 18th.”

“I’m excited to be coming back to Vancouver to race the Scotiabank Half. It is always great to race the Canada Running Series (CRS) events across the country, and I’m looking forward to getting in one last hard effort before hitting the final month or so of training for CWG,” shared Marchant, who will be competing in the marathon at the Glasgow Commonwealth Games.

Caster Semenya cleared to compete at any distance, for now 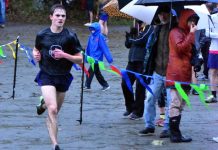