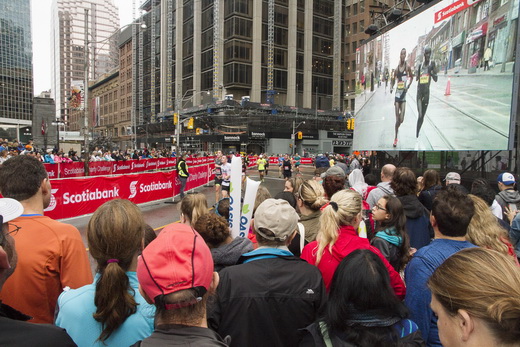 Running fans from around the world will once again be able to watch the Scotiabank Toronto Waterfront Marathon in its entirety thanks to a unique partnership between race organizers, sponsors and Astrodog Media.

Beginning at 8:15 a.m. (EDT) October 22nd viewers need only log in to STWM.ca (the race is also being carried on cbcsports.ca and athleticscanada.tv) for four hours of live coverage. There will be no geo-blocking.

The 2017 edition of this IAAF Gold Label race features the best men’s field Canada has ever seen with Kenya’s Dickson Chumba, winner of Chicago and Tokyo marathons and his countryman the defending champion Philemon Rono, taking on a strong field of Ethiopian talent. Endeshaw Negasse (also a past Tokyo winner) and Tadese Tola, like Chumba, belong to the ‘sub 2:05 club’ and will promise an exciting battle for the $25,000 first place prize money.

The race once again serves as the Athletics Canada Marathon Championships with a new generation Canadian marathoners toeing the line.

Last year more than 74,000 viewers tuned in to view the race from 129 countries around the world. Matt Hortobayi, Executive Producer, points out that the production will again include nine broadcast cameras, three promotional cameras as well as a drone.

Hutchings is a much accomplished and extremely busy commentator having worked for NBC, Eurosport, CBC, BBC and many other television networks covering top-flight athletics since his retirement from competitive distance running. He was a two time IAAF World Cross Country silver medalist and finished 4th in the 1984 Olympic 5000m final.

“The Scotiabank Toronto Waterfront Marathon is deservedly regarded as a world-class event and it should be,” says Hutchings, “because Toronto is a big, powerful and beautiful city, one that oozes energy and class in so many ways and provides a wonderful backdrop for the elite races to unfold over a fast course that has produced great contests year after year.”

Hutchings relishes the opportunity to commentate on this year’s race.

“The return of the 2016 men’s champion Philemon Rono of Kenya, who will duel with one of the all-time greats in Dickson Chumba, is a match made in heaven,” he explains. “Rono won easily last year and clearly can go faster, while Chumba is consistent and has many times run faster than his compatriot. Throw in three or four others who, on paper at least, look like they can win on any given day, and we are pretty much guaranteed another quick, competitive and yet unpredictable battle.

“By contrast, the women’s elite field has less experience but equally exciting talent, while keeping us guessing as to who can deliver on the day; Ethiopia’s Sutume Asefa for example, is just 23, yet with 2:24.00 is the fastest in the race and has only run two marathons.

“Those are just two examples of head-to-heads that I’m keen to see deliver what we can expect in Toronto – memorable world-class racing, fast times and importantly, great quality pictures for myself, Krista Duchene and Michael Doyle to describe.”

New this year, select celebrity runners will be equipped with GPS trackers so they can be easily found on the course increasing the efficiency with which the motorcycle mounted cameras can find them. Of course, the elites will be followed the majority of the time. This is the seventh year that Astrodog Media has produced the Scotiabank Toronto Waterfront Marathon.

With a fast field assembled this year and a crackerjack broadcast team, fans around the world can certainly enjoy all the action of this year’s Scotiabank Toronto Waterfront Marathon on their smart phones, tablets or computers.