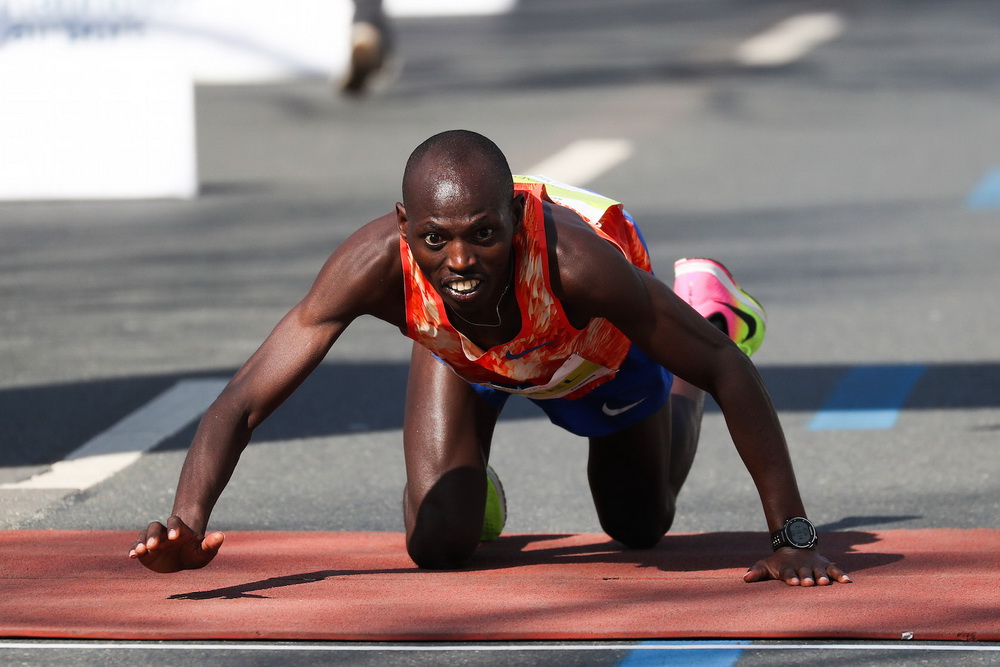 Seboka Negussa Erre of Ethiopia and Kenya’s Agnes Kiprop won the top honours at the HAJ Hannover Marathon. In sunny conditions rising towards high temperatures by the end of the race, Seboka broke 2:10 for the second time in his career to win in 2:09:44. Second place went to the Kenyan Michael Kunyaga who finished in a manner rarely seen among elite runners: he collapsed a few metres from the finish but kept going by crawling over the line in 2:10:16, barely holding off his compatriot Duncan Koech in 2:10:19. Kunyaga’s determination was rewarded with a personal best as well as runner-up spot.

The men’s elite field did not feature any German runners and home hopes were also dashed for Fate Tola in the women’s race. Last year’s women’s champion dropped out at 17 kilometres, suffering from a heavy cold and cough. Victory went to the Kenyan Agnes Kiprop in 2:32:35 with Akmaral Meirman of Kazakhstan finishing a distant second in 2:55:58 and the German runner Aida Stahlhut third in 3:03:13. The women’s elite field was seriously affected by withdrawals because of injury and visa problems in the days before the race which included a group of Ethiopian runners being unable to arrive in Hanover in time.

An eight-strong group reached halfway in the men’s race in 64:12. The pacemakers had fulfilled their task to the letter, putting the field at this point on target to attack the course record of 2:08:32. At this time the favourite Gilbert Kirwa, whose 2:06:14 made him the fastest on the start list, was already a minute off the pace and dropped out soon after, having encountered early problems.

As temperatures rose the lead group slackened their pace and the prospect of attacking the course record slipped out of reach. Shortly after reaching 30km in 1:31:53, four runners broke away from the lead group with Duncan Koech leading from Seboka Erre and Mengistu Gezahagan of Ethiopia and Michael Kunyaga of Kenya. With 35 kilometres completed Erre made what proved to be a decisive break.

“I’m so happy to have won my first marathon. The weather didn’t give me any problems,” said the 29-year-old Ethiopian and added: “The course is perfect, it’s the best I’ve ever run. Next year I want to run in Hannover again and run faster!”

In a greatly reduced women’s elite field the lead was initially shared by Agnes Kiprop and Fate Tola. They went through 10km in 35:05 but Kiprop broke away at 15km and Tola dropped out soon after. After going through halfway in a speedy 1:13:30 Agnes Kiprop ran unchallenged to victory but couldn’t maintain her pace in the second half. “I’m happy to have won but had foot problems from 29 kilometres and was getting pains and cramps. My pacemaker said to me that I had to keep going,” explained Kiprop.

Fate Tola was disappointed that she couldn’t produce her best in front of her home fans and retain the title. “I went down with a cold and cough before the race and by 17 kilometres couldn’t go on and had to drop out,” said Tola and added: “I’ll be back next year and try again.”