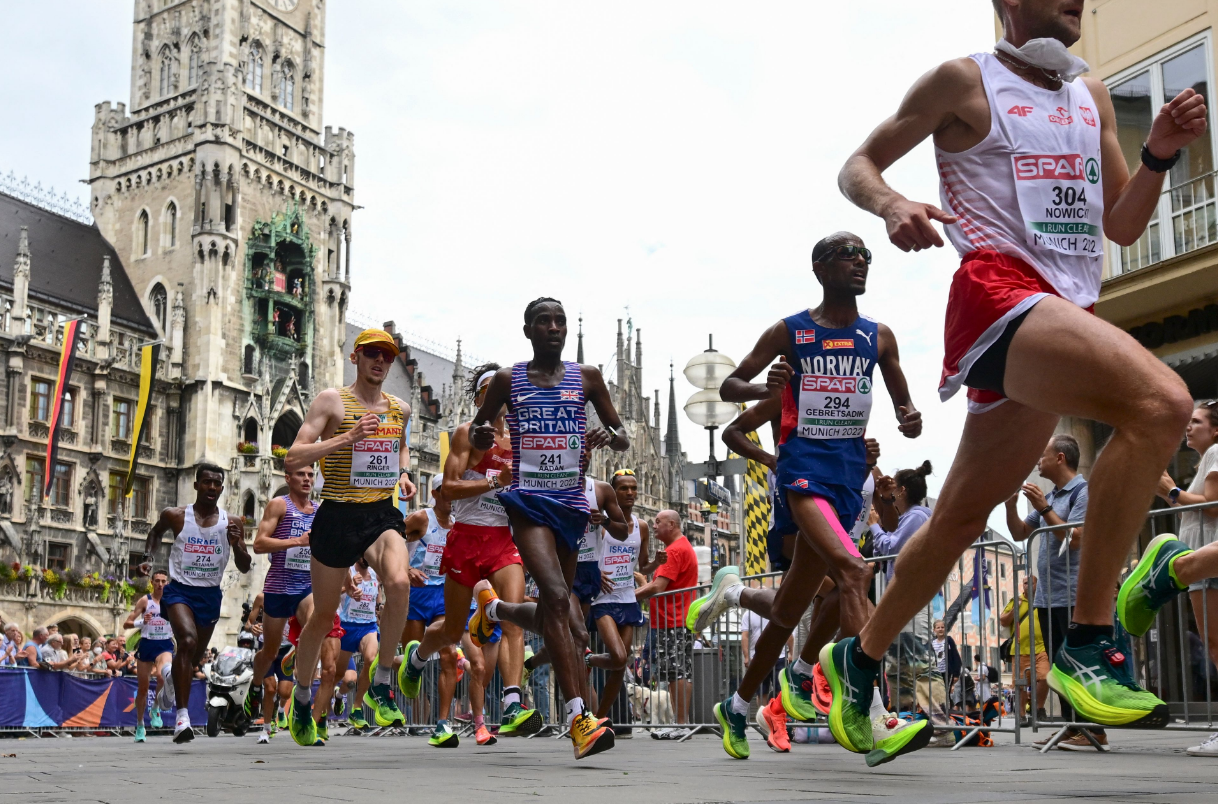 Sesemann broke into the top 20 as the first morning saw the first finals take place, clocking 2:15:17 hours for 17th and Alice Wright (Ben Rosario; Worcester) was 22nd in the women’s marathon while Nelson, named captain and called up for the women’s 100m in a matter of hours in the build-up, was one of seven British athletes to progress.

She cruised through to the semi-finals of the women’s 100m semi-finals while Cook equalled her personal best of 4.50m in qualification in the women’s pole vault, Molly Caudery (Simpson; Thames Valley) joining her in that final too.

The results are in for the men's marathon 🙌

Sesemann, in his first major championship marathon, first of 2022 and only second of his career, was barely out of the top 20 during the entire race as he kept his mind focused on the task in hand, and finished as the top Brit in 17th overall in 2:15:17.

He was joined in the race by four other Brits with Mohamud Aadan (Paul Oppe; Thames Valley) second to cross in 30th overall in 2:17:34 while Andrew Davies (Stockport) was five places behind in 35th in 2:18:23. Andrew Heyes (Mara Yamauchi; Hallamshire) was 44th in 2:19:47 while Luke Caldwell (Dorking & Mole Valley) unfortunately pulled out just before the halfway mark as the British team placed seventh overall.

“Because it was a big group in the first half I made sure I got my feed drinks but to get other water bottles and ice and sponges was quite quite tough but in the second half I was able to get them so that provided a bit of respite.

“It’s only the second marathon under my belt, I didn’t think I was having a good day but I still came 17th in Europe so it’s not a terrible day.  One thing is the head dropped and the body wasn’t quite there in the second half so to still come in 17th is a positive and I’m proud of that, it was tough today.”

In the first final in Munich, Wright took the women’s marathon out during the early kilometres and maintained herself through the first half of the race. The pace would wear on however but she finished as the best of the British quartet in 22nd in 2:35:33.

Naomi Mitchell (Nick Anderson, Reading) meanwhile worked her way through the field to finish 25th in 2:36:44 as did Becky Briggs (Geoff Watkin, City of Hull) who placed 31st in 2:39:02. Rosie Edwards (Robert Hawkins, Rotherham) ensured all four were in the top 40, crossing in 35th in season’s best 2:40:47. All four combined to help the British team place sixth.

Mitchell said: “I thought I’d kept it sensible until halfway but the heat just made it so tough. We are just happy that all four of us finished and gave the team the best shout. With the clouds, it didn’t feel too bad early on but the heat did affect us on the last lap.

“I am really grateful to be here. It was a great experience and gives me a boost as I target the spring marathons next year, and hopefully the World Championships.”

Nelson had a whirlwind immediate build up to Munich, having the honour of being named captain of the British team but also drafted in as a late replacement in the women’s 100m after the unfortunate withdrawal of Asha Philip (Amy Deem, Newham & Essex Beagles) due to a positive covid test.

She made comfortable work of setting the tone for the team, reaching the women’s 100m semi-finals – the only British athlete on the team for Munich to race the 100m heats, men and women – placing third in the second of three heats in 11.41 for fourth overall. The other athletes received a direct bye into the semi-finals.

She said: “I went from coming just for the relay, to running the 100m and then being named captain. It’s all quite emotional but I came out to set the bar high for the team. I feel like I’ve done that so I hope they can follow my lead.

“It was a bit of a surprise to be running, and it is in unfortunate circumstances, but now I’ve got the opportunity, I’m not only running for myself but I’m running for Asha too. When you are given an opportunity, you’ve got to grab it with both hands, so I want to go out there and put my training into action.

“With it being my first individual race since the British trials [at the end of June], I knew I was going to have to run the cobwebs off a bit. I think my start could have been a little bit better, but I’ll go back and check that with my coach.”

Cook’s performance in qualification for the women’s pole vault was among the standout of the British athletes in action in what was a fine opening morning for the team as she was the first to set a personal best in Munich.

Both Cook and Caudery set pulses raising with their series, but it was all worthwhile as both qualified for the final. Commonwealth silver medallist Caudery needed a third-time attempt at 4.50m to book her place but pulled it off with a brilliant leap.

She said: “I’m really happy that I have made it to the final because that is what I came here to do. To be honest, I just got the job done. It wasn’t an easy qualification but I think clearing 4.40m on the first attempt was quite critical and then it was good to go over 4.50m.”

Cook was in similar territory at the same height of 4.50m – equalling her personal best set in 2020 – but clearly relished the occasion as she also produced a brilliant leap to clear comfortably and progress to the final.

She said “It was a stressful competition but I did really enjoy it. Everything just felt great, and it was nice to jump what I know I’m capable of and also get through to the final.

“[Clearing 4.50m on final attempt] I do love a pressure jump. It was nerve-wracking, but I felt like I knew what I needed to do, it was just about executing it at the right time.”

Lincoln was the first British athlete of these Championships in action and his progress into the men’s shot put final could not have been smoother. Fresh from Commonwealth bronze, he cruised out of qualifying with a best of 20.64m.

That came with his second effort after an opener of 20.28m and, while he threw 20.36m third time out and was outside of the automatic qualifying distance of 21.15, his morning’s work was a good one as he ranked fifth overall.

The final comes thick and fast in the evening of the opening day and Lincoln said: “[There were] Some nice easy throws. The technique’s finally clicking, so I feel like I can push on later. It’s quite an exciting time.

“I’ve been over 20 metres pretty much all year. I dropped under it a couple of times in really bad circumstances. I opened up at the Commonwealths in the first four rounds under 19 metres, and I was kind of confused about it.

“But I started to get in a groove and it’s just pushed me on to start believing that I can actually achieve medals and not just go in to make the numbers up. I want to go in and to win a medal.”

Meanwhile in qualification for the women’s shot put McKinna ensured the good morning for the British team continued as she reached another European final. One of three Brits in the event, her first effort of 17.33m was good enough to see her through.

Unfortunately, neither of her British teammates Divine Oladipo (Ashley Kovacs, Blackheath and Bromley) nor Amelia Strickler (Zane Duquemin, Thames Valley) were able to join her in advancing to the final in Munich.

Oladipo, the highest British finisher in the Commonwealth final, joined McKinna in qualification group B and threw a best of 17.16m and Strickler, in group A, recorded 17.20m but both were just shy of a place in the final.

McKinna said: “This has been a really difficult year with four championships, and I am tired but with all the technical changes I am making, it was always going to be difficult to reach the final.

“It was always going to be a difficult decision to make [changing technique] but it was for the future. I gave literally my heart and soul out there; I couldn’t have given any more but I have saved a bit for the final. We’ll go again and hopefully throw a lot further.”

There were also three Brits in qualification for the men’s long jump final and Fincham-Dukes and Banigo were the two to progress. Fincham-Dukes was impressive in setting a season’s best 7.86m with his second effort in group A and not needing a third.

He said: “I’m really happy to get a season’s best. I felt really comfortable and managed the conditions well. I feel like I am coming into form at the right time. I think if you can get into the 8.10s in the final then you have a shot at the medals.”

Banigo leapt out to 7.75m in group B, also with his second attempt before recording a foul with his last, while teammate Jack Roach (Lukasz Zawila, Harrow) just missed out on joining them in the final with a best of 7.35m.

He said: “It was a bit of a nerve-wracking wait after a fouled in the final round but luckily I stayed in the top 12 so I’m really happy to have made the final. I feel like I can get something decent tomorrow. I think I can jump a PB, so I hope I can put on a show.”