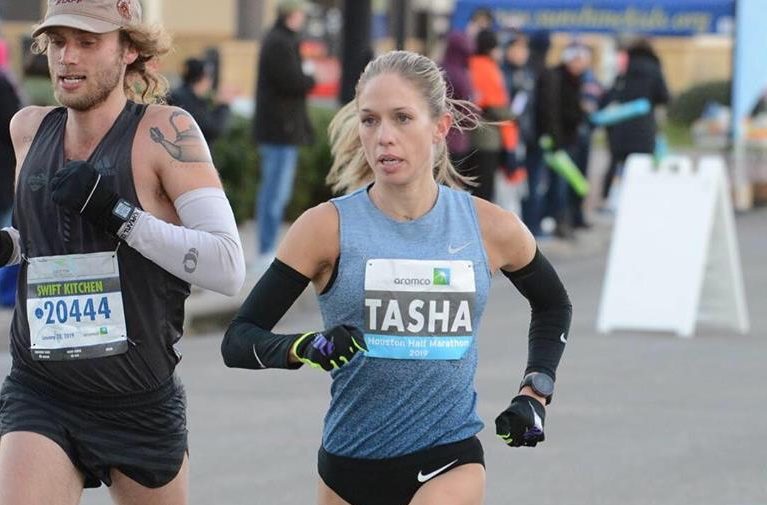 To no one’s surprise, Vancouver’s Natasha Wodak ran a new personal best during the 2019 Chevron Houston Half Marathon on Sunday.

Wodak, the week previous, ran a very strong 8K road race in Victoria, finishing first in the time of 26:04 at the Pioneer 8K. It was a foreshadowing of things to come.

“I felt great right off the start – besides the icy cold wind in our face,” Wodak told Athletics Illustrated. “I started more on the conservative side at 16:47 for the first 5k then latched onto a group of guys that took me through the next 5k in 16:36. At that point, I felt really good and picked up the pace. I thought I could get the record, but at 14k, we turned a corner and ran straight into the ice cold wind for 4k straight. I was on my own at this point and fought hard to keep my rhythm but I knew my pace had slowed down and the Canadian record was out of reach. I’m stoked with my time anyway – and how strong I felt in the race, more to come!!!”

Sunday, she was the first Canadian and 10th finisher overall.

The women’s race was won by Kenyan Brigid Kosgei who recorded a finish time of 1:05:50, second was Kenyan Fancy Cheutai and third was Ethiopian Ruti Aga. They finished in 1:06:48 and 1:06:56, respectively.

The world record is 1:04:51 by Kenyan Joyciline Jepkosgei, who ran that time in a mixed gender race, while 1:06:11 is recognized as the record for a women’s only race, achieved by Netsanet Gudeta of Ethiopia.

The top Canadian male was Evan Esselink of Vancouver with a finish time of 1:02:17, which represents a new personal best time. He finished 14th overall and first in his 25-29 age-group. He ran a 1:04:08 last year at Houston. The performance is the fourth fastest Canadian half-marathon all-time.

Other Canadians in the race were Chris Balestrini 36th finishing in the time of 65:16, Adam Hortian 49th in 66:46 and then there were four consecutive Canadians finishing 52nd-55th including Eric Bang, Kyle Wyatt, Colin Fewer and Ben Carson. Fewer won the masters division (40-44) in the time of 67:09. The field was so deep that Philippe Viau-Dupuis finished 63rd, but ran to a 67:52 finish time. Benjamin Raymond was the final Canadian under 1:10:00 with a 69:00 result. Canadian marathon champion Trevor Hofbauer of Calgary crossed the line in the time of 1:10:11.

The top three finishers were Shura Kitata in 60:11, Jemal Yimer 60:14 both of Ethiopia, while Bedan Muchiri was four seconds back as the first Kenyan.

The world record is 58:18 by Abraham Kiptum of Kenya from 2018 Valencia Half Marathon.

Canada had a strong day in Houston during the marathon as well, with Kelowna’s Malindi Elmore as first Canadian in the time of 2:32:15 in her debut at the distance. She raced the marathon distance twice in an Ironman event in the past. Sunday, she finished seventh overall and won the 35-39 age-group. The 39-year-old had her second child just seven months previous.

Elmore told Athletics Illustrated, “It was fun to train for a long race without swimming or biking. Loved it!”

Right behind her was Toronto’s Sasha Gollish finishing eighth in the time of 2:32:54. Gollish started the 2018 Berlin Marathon, but had to drop out; otherwise, this is her first complete marathon. Kate Bazeley finished sub-2:40, for a new personal best with her finish time of 2:39:55.

The fastest Canadian male was Tristan Woodfine of Guelph, Ontario. Woodfine finished 13th overall in the time of 2:15:19 for a new personal best performance. Rejean Chaisson managed a 2:30:07 as second Canadian.