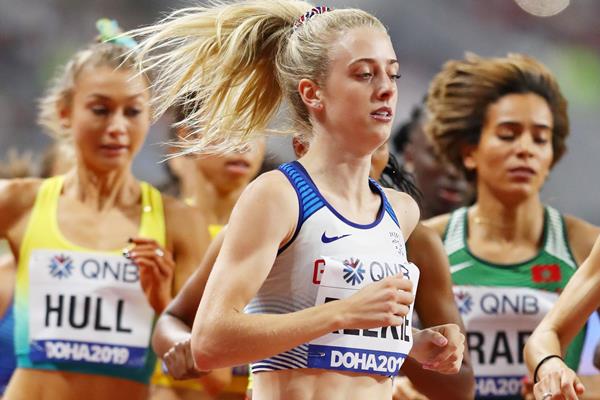 Going into the final lap of the women’s 5000m race, there were four together when they heard the bell ring to mark that there were just 400m to go in the race. To that point, they clocked 11.5 laps in 13:57.78 to 13:57.16, little more than half a second separated Canadian Julie-Anne Staehli who was in the lead, and British runner Jessica Judd in fourth. Nothing changed in terms of order at the finish as they fought hard for a strong finish and to achieve the Tokyo Olympic standard of sub-15:10.00. All four bettered the mark.

Staehli put a little extra space between her and Hawthorn and Judd finishing in the time of 15:02.34. But. taking a close second was Mexican Laura Galvin-Rodriguez with a 15:02.48 result. In third was Canadian Natalia Hawthorn in 15:05.91 and Judd 15:06.02 — all personal best performances.

Staehli had set a new personal best the week prior with a 15:24.66 performance in Kansas City. Hawthorn is enjoying her best season to date.

In the men’s race, five athletes ran under 14-minutes. The race was won by American Mason Ferlic in the time of 13:24.94, missing the Olympic standard of 13:13.50, but running a new personal best time.

There was a total of 35 events contested at Walnut Grove, CA Sunday including 100m sprints, throws events, and more middle-distance racing.

There was much interest pre-race in how Seattle Seahawk wide receiver DK Metcalfe would do in the 100m sprint. He finished deep in the field, however, ran a very respectable 10.37 for 15th place. The race was won by Isiah Young in the time of 10.09. Finishing second was Cravon Gillespie in 10.11 and in third was Michael Rodgers clocked a 10.12. All three are Americans, all three ran season-best performances. The Olympic standard is 10.05.

Two years ago Gillespie clocked a 9.93 in Austin, TX for his lifetime personal best. The result Sunday is a step in the right direction as the track season begins to unfold, he expects to dip below the 10-second benchmark well before the Olympics.

Thirty-six-year-old Rodgers continues to defy age, like Justin Gatlin. Rodgers has run as fast as a wind-aided 9.80 and 9.85 in 2014 and 2011, respectively. He is a five-time World Athletics Championships competitor.

Metcalfe, with a full season of training and racing, it is assumed, would easily qualify for the U.S. Olympic team.

Elle Purrier won the women’s 1500m in the time of 3:58.36. She was the only one to drop below the tough four-minute barrier during the race, which is the current world-leading performance for 2021, Olympic standard, and a personal best for the American.

Finishing in second was Canadian six-time national record holder Gabriela DeBues-Stafford clocking a solid 4:00.69. In third was American Shannon Osika with her new personal best of 4:00.73.

DeBues-Stafford, who joined the Nike Bowerman Track Club last year, is the first Canadian to run under that four-minute barrier with her 3:56.12 performance from the 2019 Doha World Athletics Championships.

Lucia Stafford, the younger sister of Gabriela clocked a new best of 4:05.30 for fifth place.

Australian Ollie Hoare won the men’s 1500m race with a shiny new personal best time of 3:33.19. He led from the gun, but hot on his tale was Canadian Justyn Knight, who stamped his Olympic qualifier with a new best of 3:33.41. Finishing third was American Henry Wynne over three seconds back in 3:36.86.

Interestingly, Canadian record holder in the 5000m and 10,000m, Mo Ahmed, took in the under-distance race, perhaps to get the wheels turning in the high-octane metric mile. He clocked a 3:40.67. It was likely a great training stimulus run, perhaps before a 5000m race. He is the first Canadian to dip below both the 13-minute and 37-minute barriers in the two longer distances, respectively. He has run as fast as 12:47.20 and 26:59.35.

Jemma Reekie, Laura Muir, and Melissa Bishop-Nriagu went 1-2-3. Bettors would have a difficult time getting the order correct if odd were given, all three are capable of winning the event on the right day.

For Reekie, the performance represents a new lifetime best at 1:58.27. For Muir is was an under-distance race, for the 1500m specialist, who clocked a 1:58.46. And for Bishop-Nriagu, she just keeps rounding into form better and better as the season progresses. Her 1:58.62 is a second faster than the week prior and the second time that she has run under two-minutes since having a daughter two years ago.

She owns the national record of 1:57.01 and has also run 1:57.02 at the 2016 Rio Olympic Games. She earned a silver medal during the 2015 Beijing World Athletics Championships. Bishop-Nriagu is racing once more this season on Saturday, May, 15 at the LA Sound Running meet before heading home to Windsor, ON.

She qualified for the Tokyo Olympic Games on Sunday, May 2nd. She won the race at the Chula Vista High Performance Meet #3 in San Diego, CA, clocking a 1:59.04.