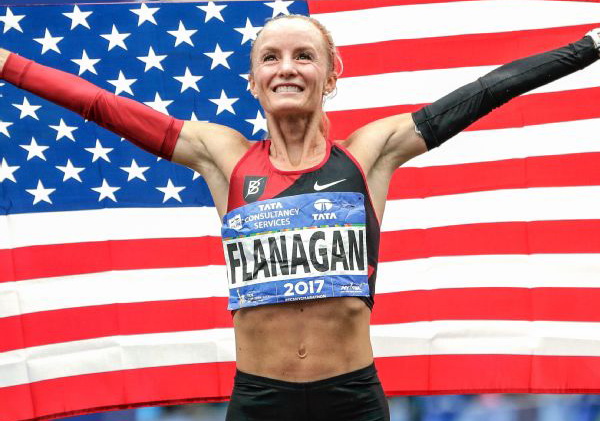 For her, running is a life-long passion that has come full circle.

Her career began to take off in college at the University of North Carolina. In 2002, she won the first NCAA Cross Country title in the school’s history. She also won it in 2003. In 2004 and 2005, she was the U.S. cross country champion at 4K, but it all started long before college.

Both of her parents were excellent distance runners. Her father Steve Flanagan owns a marathon personal best of 2:18, while her mother Cheryl Treworgy (Bridges) set an American marathon record and competed on the U.S. world cross country teams during the 1960s and 1970s.

In 2010, when asked about being in a running family she told Athletics Illustrated, “My parents always emphasized working hard for your goals and dreams. Just because my parents were good runners, didn’t mean I felt entitled to being a good runner. I grew up in an environment where sports and exercise were a big part of family life. I have always been innately competitive in everything I do and I believe that competitive drive has set the standard. I am fortunate that my parents have supported and fostered my competitive side and passion for running.”

When the now Portland, OR athlete visits her parents or when they watched her race, she often took runs with her father. “He is one of my favorite people to run with.”

Flanagan won those two NCAA titles, was also a six-time US cross country champion, six-time US track champion and earned the silver medal during the 2008 Beijing Olympic Games 10,000m. She finished third, however, Elvan Abeylegesse of Turkey tested positive for a banned substance and Flanagan was subsequently moved up. She was surprisingly emotional about the move to silver.

She is a four-time Olympian.

She went on to run the marathon in a world-class 2:21:40 and set four American records.

In 2017, she became the first American woman to win the New York City Marathon in 40 years; it was an indelible moment. She finished third in 2018.

Much like a 400m track, for the young girl that grew up in a running household, competed in college and took on longer distances throughout her professional career, athletics has come full circle for Flanagan. She has been seen occasionally in broadcast booths and has now turned her passion for athletics to coaching and has joined the very successful Bowerman Track Club with her former coach Jerry Schumacher.

“With happy tears, I announce today that I am retiring from professional running. From 2004 to 2019 I’ve given everything that’s within me to this sport and wow it’s been an incredible ride!”

Considering her lifelong involvement in the sport that she was born into, grew to love and took on with a healthy competitive passion, her ride is not likely over.

With happy tears I announce today that I am retiring from professional running. From 2004 to 2019 I’ve given everything that’s within me to this sport and wow it’s been an incredible ride! I’ve broken bones, torn tendons, and lost too many toenails to count. I’ve experienced otherworldly highs and abysmal lows. I’ve loved (and learned from) it all. Over the last 15 years I found out what I was capable of, and it was more than I ever dreamed possible. Now that all is said and done, I am most proud of the consistently high level of running I produced year after year. No matter what I accomplished the year before, it never got any easier. Each season, each race was hard, so hard. But this I know to be true: hard things are wonderful, beautiful, and give meaning to life. I’ve loved having an intense sense of purpose. For 15 years I’ve woken up every day knowing I was exactly where I needed to be. The feeling of pressing the threshold of my mental and physical limits has been bliss. I’ve gone to bed with a giant tired smile on my face and woken up with the same smile. My obsession to put one foot in front of the other, as quickly as I can, has given me so much joy. However, I have felt my North Star shifting, my passion and purpose is no longer about MY running; it’s more and more about those around me. All I’ve ever known, in my approach to anything, is going ALL IN. So I’m carrying this to coaching. I want to be consumed with serving others the way I have been consumed with being the best athlete I can be. I am privileged to announce I am now a professional coach of the Nike Bowerman Track Club. This amazing opportunity in front of me, to give back to the sport, that gave me so much, is not lost on me. I’ve pinched myself numerous times to make sure this is real. I am well aware that retirement for professional athletes can be an extremely hard transition. I am lucky, as I know already, that coaching will bring me as much joy and heartache that my own running career gave me. I believe we are meant to inspire one another, we are meant to learn from one another. Sharing everything I’ve learned about and from running is what I’m meant to do now.(1/2)