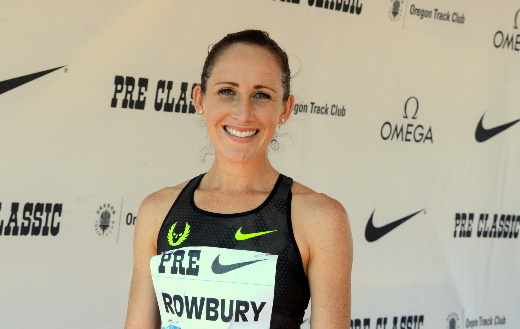 Shannon Rowbury is one of America’s best middle-distance runners. She has competed in the 2008 Beijing and 2012 London Olympic Games, specialising in the 1500m distance.

Originally from San Francisco, she attended Duke University where she earned a master’s degree in Film and Women’s Studies. She had a competitive college career earning All-American status in her sophomore year. She set the following Duke University distance records: 800m, 1500m, 3000m, 5000m and steeplechase.

She signed with Nike in 2007 and currently trains under Alberto Salazar. During the 2009 IAAF World Track and Field Championships, she won a bronze medal in the 1500m.  In terms of personal best performances the 2014 season may have been her best to date, as she set new standards in the 1500m, 3,000m and 5,000m distances.

Christopher Kelsall: You were competitive in Irish Dance, yes? At what age did you switch to running?

Shannon Rowbury: Yes I was in Irish Dance and then soccer; it wasn’t until high school that I turned to running. I had a friend who was on the team and went out and discovered that I had some level of talent.

SR: Yes, actually Irish Dance was better for running than soccer was in some ways as it helped with core and hip strength and very much the lower leg as well as the fast twitch muscles. In national and international dance, the skills translate to running. It also helped develop good running form. Soccer was very good, but Irish Dance was even better.

SR: Well even better, as the work in Irish dancing is like doing intervals and has running specific strengthening, whereas ballet encourages hyper mobility in the joints. So I would say that it actually prepared me well for running.

CK: What is the Parkside area in San Francisco like for a runner?

SR: Parkside and the entire western half of San Fransisco have great green spaces. It is a great area for running, with lots of parks and trails in places like Golden Gate Park and Lake Merced.

CK: What was Duke University like for your development?

SR: I chose Duke, because I grew up on the west coast and wanted to experience something different, a different environment. I thought somewhere east would be a good idea. Duke has a great program and an excellent coach in Kevin Jermyn.

At first I didn’t know about professional running, as I expected to work after I graduated, but an unexpected benefit of having Kevin as a coach was that he opened my eyes to post collegiate running. During my redshirt year I competed in a Golden League race and that opportunity exposed to what it would be like to race as a professional after graduation. I am thankful for that.

SR: Well I have run a variety of events since high school and will continue to for now. I ran everything from the 800m up to cross country. I always enjoyed a variety of distances. The 3,000m and 5,000m were good, but in Europe last summer, I ran in only my second Diamond League 1500m of the season against girls who were specializing in the distance. They had multiple chances to compete and get it right, but I broke 4:00 for the first time in that second race. In fact I ran two 3:59s in 2:014.

Having run 3:59, 8:29 and 14:48 I am pretty sure there are no others in the US running that range at this time. So I will continue to run a variety of distances as I still have over a year left to make a decision on what distance I want to compete in before the Rio 2016 Olympics. In the end I think that it is more beneficial to compete over a range of distances, for as long as possible.

CK: Sounds like your coaches might have their work cut out for them keeping your enthusiasm in-check.

SR: [laughs] From the beginning I have had great coaches, in high school, university and now with Alberto Salazar. They have all had a long-term approach to my training. I also like to let the coach do their job. In the end they can see the big picture, it allows me to focus on running and to just execute the plan that they put together.

CK: Are you racing an indoor season?

SR: Yes, I will be racing at the end of January and early February.

CK: What are your indoor goals?

SR: This is my third competition cycle with Alberto, so we are just getting an idea now of what I am really capable of. My real focus is on outdoors though.

CK: Obviously qualifying for Worlds will not be an issue, so what are your goals for the 2015 outdoor season?

SR: Well the competition in both the 1500m and 5,000m are tough at the top of the world level, they are just a little different. In the 1500m, you can be close to a photo finish position and still not win, because the competition is very close and deep at the top level. In the 5,000m, there is quite a gap that the best have made for themselves, since at the moment they seem to be so much better than the rest. So either way both distances are very challenging when you get to the world level.

Also each Olympics, athletes seem to come out of the woodwork, perhaps they focus hard on the Olympics, or they mature in time for the meet or they just come off of drug bans. I know I will just continue to compete clean as I always have. But again, I have some time before I have to make a decision on which distance to race in the Olympics and I will watch and see how the competition pans out as we get closer.

CK: It doesn’t look good for the sport to have all the positive tests, but perhaps the sport needs a cleanup?

SR: It doesn’t look good for the sport, but I would much rather have people being caught and dealt with appropriately than WADA not able to catch them. At least we know they are being caught and suspended. There is awareness being made showing young athletes that it doesn’t pay to cheat. Anyway it doesn’t change anything for me, as I have always competed clean.

It is mind boggling that there are federations that are manipulating the system. I am not saying the US is perfect or better, because we certainly have had our cheats, but at least we try to catch people, where RUSADA appears to be involved with the doping. I want to compete clean and take care of my body and know that when I have kids they will be healthy. I want to honour the people that have supported me through my career. Clearly they (countries with systematic doping) have a very different value system than we do. Athletes should want to bring honour to their country and be a good role model for kids who may want to compete in the future.

CK: You did win a bronze at the 2009 IAAF World Track and Field Championships; can you take me through the meet?

SR: That was a very crazy time for me. My boyfriend and I had just broken up, when we arrived in Berlin there were bed bugs, so that wasn’t very pleasant. In the first round an Ethiopian had tripped me, so I didn’t initially qualify to move on and we had to file a protest for me to be able to race the second round. In that second round there was a huge thunder and lightning storm going on. All the athletes were held up in the second call room. We had all done our warm up and pre-race preparation and were waiting when they told us there would be a delay. We had to wait an extra 40 minutes, so of course we had to adjust.

In the final race a Spanish athlete was DQ’d for stepping on the inside of the track, trying to avoid another athlete who fell, who happened to be another Ethiopian. I think the Spanish girl may have also been involved with what caused the tripping. I am not sure exactly what was going on at the time as it happened so fast, that I just hurdled over her to stay in the race. Anyway, the Spanish girl won and because she was DQ’d I moved up a medal position. That was a very crazy time.

CK: Sounds eventful for sure. Back to 2014, what was the difference in your training that helped you have such a productive year?

SR: Well again, having worked with Alberto now through a couple of full training cycles and avoiding injury helps. I have also been able to train well and with more intensity.

SR: Not as high as you might think really. In 2013 I was running around 85 miles per week (137kms), but it was generally easier than the mileage is now, as I am running around 70 miles per week (115kms), but the intensity is higher. I am getting my easier days to be faster too. I also supplement my mileage, with the Alter G, as well as some cross-training.

CK: Obviously you want to focus on the next season, Worlds and of course the Rio Olympics. It appears that your education choices point you towards broadcast journalism or perhaps filmmaking. Have you had an opportunity to work in TV or film?

SR: Yes perhaps the film production route or broadcast journalism. An athletics career and a professional broadcast career are not mutually exclusive. I am lucky enough that I have not been injured to the point where I have had much work with television or film. I have had some minor work with NBC as a spotter and beginner positions.

I am focusing on my athletics career, but when my running career is over, I would like to work where I can use the skills I have developed and in a career where I can put my creativity to good use.