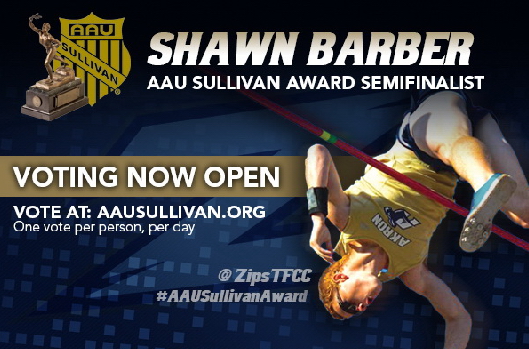 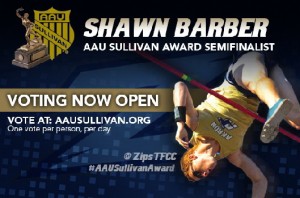 VOTE HERE (ONE VOTE PER PERSON, PER DAY)

Fourteen nominees, including 2014 Heisman Trophy award winner Marcus Mariota from Oregon, Ohio State running back Ezekiel Elliott, and Olympic Figure Skating Gold Medalists, Meryl Davis and Charlie White, are among the AAU Sullivan hopefuls that will take part in an online voting process that will run through Sunday, March 15, to select the finalists.

“I’m very honored to have been chosen as a semifinalist for the Sullivan Award,” said Barber. “To even be considered amongst such a talented field of candidates as the selection committee has assembled is truly an honor.”

“When you look at the amazing list of past winners of this award, you see how what a great honor this is for Shawn,” Akron track and field head coach Dennis Mitchell commented.

Perform has been an understatement for Barber this season as he has won every competition he has entered en route to clearing 19-0 feet (5.80m) in all but one meet.

He travels to Fayetteville, Ark., this weekend seeking to defend his 2014 NCAA Championship indoor title when he takes to the track for the pole vault competition at 7 p.m. ET on Friday, March 13.

Barber most recently captured his third consecutive Mid-American Conference Indoor title with a jump of 19-0.25 (5.80m) on Feb. 28 in Mount Pleasant, Mich., a mark that shattered his own league meet record.

Barber began the month of February stealing the show at the Akron Invitational with a jump of 19-3.5 (5.88m) that broke the all-time collegiate indoor pole vault record of 19-2.25 (5.85m) set by Jacob Davis of Texas on March 6, 1999 in Indianapolis, Ind. The mark also shattered Barber’s Stile Athletics Field House record set at the Akron Pole Vault Convention on Jan. 10, as well as his own Canadian National record (19-3) set at the Texas Expo Vault on Jan. 3.

Voting is open to everyone (sport fans, news media, coaches, family, friends) and is located at www.aausullivan.org or www.aausports.org.

Known as the “Oscar” of sports awards, and older than The Heisman, the AAU Sullivan Award honors the outstanding amateur athlete in the United States. The AAU has presented it annually since 1930 as a salute to founder, past president of the AAU, and a pioneer in amateur sports, James E. Sullivan. Besides athletic achievement, the AAU Sullivan Award also looks for leadership, character and sportsmanship. Past recipients of the award include: Bruce Jenner (1976), Peyton Manning (1997), Michael Phelps (2003), J.J. Redick (2005), Tim Tebow (2007), Shawn Johnson (2008), and Missy Franklin (2012)

Semifinalist voting will close March 15th. The top six (6) finalists will then be named. Finalists will attend the award ceremony on April 19, 2015 at 2 pm during which time the winner will be announced.

Also, this year’s ceremony marks the return to the prestigious New York Athletic Club (NYAC). Founded in 1868, the NYAC was one of the first organized amateur athletic clubs in the United States.

For more info on the event, including voting, past winners, event details and full bios on the nominees, visit aausullivan.org.

Founded in 1888, the Amateur Athletic Union (AAU) is one of the largest, non-profit, volunteer, sports organizations in the United States. The “Sports for All, Forever” philosophy is shared by over 600,000 participants and over 50,000 volunteers. The AAU annually sanctions more than 34 sports programs, 250 national championships, and over 30,000 age division events. A multi-sport organization, the AAU is dedicated exclusively to the development of amateur sports www.aausports.org