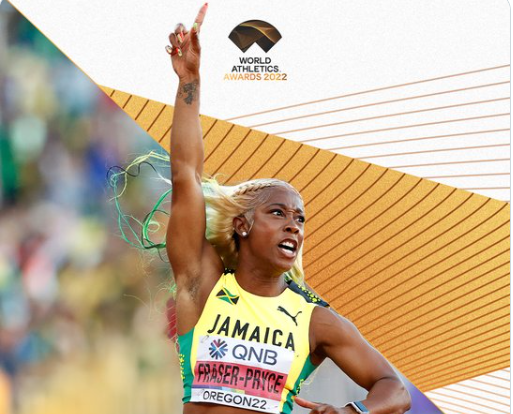 Jamaican sprint star Shelly-Ann Fraser-Pryce is in the running for the 2022 World Athletics Athletics of the Year award.

The 35-year-old won the 100-metre gold medal during the 2022 Eugene World Athletics Championships that took place in Oregon this summer.

The gregarious pint-sized powerhouse also picked up two silver medals in the 200m and 4 x 100m Relays. Her win in the 100m was done in 10.67 seconds. She ran the fastest 100m of 2022 during the Monaco Diamond League meet clocking a 10.62, the fifth fastest time in history. She also owns the third fastest time in history from the Tokyo Olympic Games in 2021 clocking a 10.60 performance. Only Florence Griffith-Joyner and Elaine Thompson-Herah have run faster at 10.49 and 10.54, respectively.

A remarkable seven performances run during 2022 are in the top 15 all-time by Fraser-Pryce. Eleven of the top-20 performances were run by the Jamaican, all-time.

Voting for the World Athletes of the Year closes at midnight on Monday 31 October. At the conclusion of the voting process, five women and five men finalists will be announced by World Athletics.

The winners will be revealed on World Athletics’ social media platforms in early December.

Further information about the World Athletics Awards 2022 will be announced in the coming weeks.