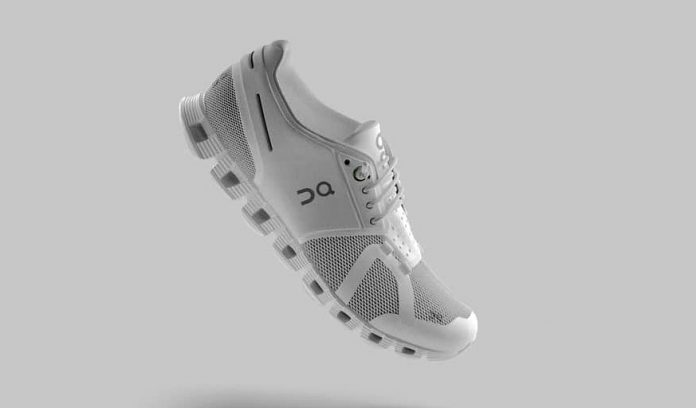 Running shoe technology is now at a point where if you are not paying attention, you may not be able to tell if you are wearing a carbon fibre plate-assisted shoe like the Nike Vaporfly or the Adidas Ultraboost and their ocean-harvested plastic bag upper from Parlay or perhaps a Newton’s Gravity 8 or the Altra Kayenta – their new performance shoe. Well, aren’t they all?

At the 2019 Vancouver Sun Run, I walked the expo floor in BC Place Stadium looking for elite and sub-elite athletes to speak with about their race the following day. I stopped at two booths that were promoting their respective brands of shoes.

I came across a name that was newer to me, yet they were vaguely and distantly familiar: On.

Featuring a subdued European styling, I was immediately curious.

They are Swiss. They are different and the Cloud model that arrived at my doorstep one week later was a pleasant surprise. I have now test driven them and so far, they are about as close to perfection as one may find in a lightweight trainer (my description).

On was launched in 2010 in Zurich when Ironman champion Olivier Bernhard teamed up with friends David Allemann and Caspar Coppetti with the desire to engineer a running shoe with a soft landing and an explosive toeoff.

Full disclosure: I am a former 100-160K per week runner of no great talent, however, am at 40K per week as I make my comeback to fitness. I bought into the minimalist design after needing two surgeries for Haglund’s Deformity. My post-surgery reaction harkened back to the early days of the first big running boom when everyone wore glorified ballet slippers; I needed to strengthen my feet and lower legs.

Leonardo Da Vinci was a curious genius. He once said, “The human foot is a masterpiece of engineering and a work of art.”

Good enough for me.

So I like to let my feet tell me the shoe model that works best for them.

Rod Dixon of Nelson, New Zealand was a rugged runner and once considered the most versatile of all. He was competitive from 800-metres to the marathon. He ran 2:08:59 in 1983. It was a world-class standard at the time and still is if you are talking the New York City Marathon, which is where he ran that performance, with a thigh cramp.

Looking at some of the old photos of him racing, his shoes provided no protection. His protection was built into his feet from years of training in the very hilly Nelson area.

It takes time and patience for runners to build that sort of foot strength.

For those that prefer or need to run with some level of cushioning, the Cloud Terry offers a blend of flex, an incredible lightness of being, yet a degree of cushioning as an added bonus.

Slipping into the Cloud, I found that they fit perfectly at my size: US 9. The roominess leaves space enough to wiggle the toes and the upper is very flexible. The shoe weighs in at a super lightweight 8.5 ounces – so just as light as a 90’s racing flat – yet the sole provides enough cushioning for a forefoot-midfoot strike that it feels race-ready for the asphalt yet protective on the trail.

They are also low profile enough that I do not feel a threat of going over on my near ligament-less ankles.

After wearing them around the office and on 3K walks to and from the office, the first run I demoed them on was a 5K jaunt – a steam blower-outer. The route offered a mix of asphalt, hard-packed gravel and featured a 200-metre bridge (went over it twice) with a solid 6 x 6 post deck construction and big recessed hex lag bolts – posing no problem for the Cloud.

Rachel Cliff, the Canadian record holder in the marathon with her 2:26:56 performance from March of 2019, told me, “I also wear mine for walking around and to the gym (I have really positive things to say about other trainers of theirs as well). The elastic laces are great for slip on – slip off so I find that’s perfect for the gym where I do half my weights barefoot anyways but still need a running shoe for other exercises.”

She basically wears On running shoes 100 per cent of the time, except probably not when sleeping.

The second run of 7K featured the same surface offerings, but with twists and turns throughout and sharp ups and downs that roller-coastered the second half of the run. We ran a little on the deep grass as well.

According to On, their patented CloudTec® technology is “engineered to deliver a soft landing followed by an explosive take-off. The result? An unbelievably light running sensation. And no compromise on cushioning and impact protection. In other words, running on clouds.”

As a midfoot and forefoot striker with a rollout and toe-off towards the outer forefoot area (supination), I can often feel the inner side of the gastrocnemius calf muscle when wearing a controlling or overly cushioning shoe. If the shoe has a stiff sole, the soleus muscle will feel sore for a couple of days afterward – not here.

The minimal 6mm drop heal-to-toe was perfect. I tried heel striking for testing purposes (again, not a heel striker) and the cushioning was superb.

As for Cliff, “For running I sometimes wear the CloudX, which is basically the Cloud sole but with an upper that’s a little more fitted, for shorter and mid-runs – especially if I want to go a little faster.”

Like Cliff, I can wear them with regular clothes while making a fashion statement. The men’s are offered with three tastefull colours in either pebble, ruby, or silver. The women’s are offered in pebble, olive, and silver.

The toebox will allow me to keep my toenails, once they grow back.

“The other thing I love about the Clouds is that they look like a casual shoe but have the sole of a running shoe, so I’m basically able to wear a running shoe 24/7 – which is ideal for recovery post-workout – without looking like I am.”

The secrets “On” us, Rachel.

It is very difficult to find anything about the shoe to keep it from getting a 100 per cent ®Happy Feet rating (ala Rotten Tomatoes for movie-goers) and at $189 CDN, they are well worth the investment.