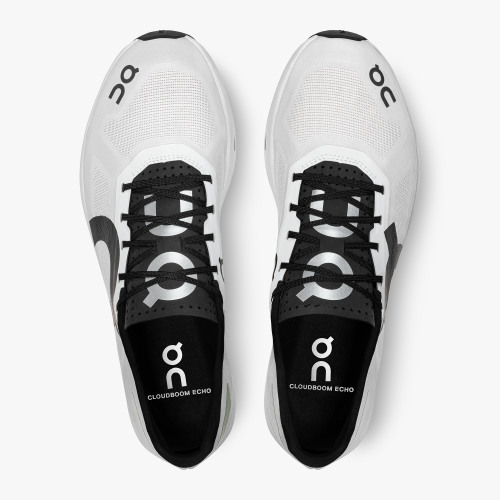 The On Cloudboom Echo provides an incredible lightness of being. The shoe — referred to as a “marathon shoe” by On — is likely to produce results no matter the road event that you choose to compete in.

Upper
Engineered mesh with targeted reinforcement for ventilation and hold. Around 70% of the polyester content, and 20% of the entire shoe, is made from recycled materials.
Speedboard
Carbon-infused and shaped with an extreme rocker for powerful propulsion.
Outsole
Performance rubber compound with enhanced traction geometry.
Midsole
Dual layers of CloudTec® in Helion® superfoam

It takes one or two sessions to become acquainted with the fit and feel and then you are off and running, leaving nothing behind but the echo of your wake.

The first time I tried them on, I was indoors and they were fresh out of the box. I stepped onto the Berber and found myself walking on clouds. While familiarising myself with the size and fit, they begged to go outside. They were different, to be sure. With a tapered heel, heel planting (which I do not do anyway) is out. When I did run, I felt a tendency to forefoot plant and toe-off well into the front of the foot. This produced a similar sensation to barefoot striding, plus the benefit of the deep-cushioned landing. You know those times when taking off your shoes after a workout and you run relaxed on the infield or at a local soccer pitch? The desire to lift the knee, push off a little harder, and kick the heel up is noticeably amplified. I also sensed a subtle forward lean from the ankle up to the shoulders.

The carbon plate is a spring

I wondered it can’t be this good in any other shoe, can it? Full disclosure, I have yet to wear any other super shoe.

Being conditioned to wearing varying models of shoes in varying states of condition, like the New Balance 880s, adidas Response as well as the Ultraboost and Saucony Kinvaras (I am a holdover from the minimalist era), the Cloudboom Echo feels to running as e-bikes must be to cycling. Have you seen those fat-tyred safety-vest-wearing e-bikers clocking 30 mph/50 kph while barely pedalling? This lightness of being gave me a sense of imposter syndrome, like am I faster now, I questioned?

Suddenly, I felt ready to drop my 5K tempo pace down by half a minute per km. That’s a lot.

The first run was indeed a 5K; a blow-out-the-tubes lunch run in the heat. I was shocked upon my return to the office to find that I had run approximately 20 seconds faster per km than the effort I felt that I was putting out. I had to think about what just happened.

As a middle-aged man, who had a decade off due to three surgeries including a hip replacement, 5:00 per km is the new 3:30 per km.

For example, Joe Klecker, told Athletics Illustrated, “it’s the go-to shoe for me as well as the rest of the club.”

Klecker wears them for approximately 10 per cent of his overall training. He will be competing in the Tokyo Olympic Games in the 10,000m event, representing the U.S.A. and On Athletics Club. He has clocked a personal best of 27:23.44.

Rachel Cliff, former Canadian half-marathon and marathon record holder added, “I think On’s done a great job here, they’ve looked for athlete feedback and have put a lot of work into getting a nice, comfortable but still responsive foam. Like you, I notice that when I run in the CloudBoom Echo a given pace just feels easier – I can accidentally run too fast because a faster pace feels so smooth! A good problem to have in a pair of shoes. Thanks to the foam, I find I feel recovered the day after running in them which is also important for training longevity. On has done a great job of incorporating their Cloud technology into the shoes, and they not only feel fast but they look really cool!”

To dispel any concerns about the potential placebo effect, I ran again one week later on the same route, at the same time of day, and in the same conditions. It’s a dead-flat commuter trail in Saanich, BC (Victoria) that offers a combination of asphalt, hard-packed dirt, and gravel as well as a 150m wooden bridge built with 6” x 6” planking bolted perpendicular. It is an out-and-back, so the bridge was run on twice.

Same result. And again, a third time and a fourth time. I typically run this lunchtime route in the Ultraboost, 880s, and Kinvaras as well as a pair of Nike Pegasus 36 TB (to be reviewed soon). The assistance by the Cloudboom Echo is clear and present.

The shoe is esthetically pleasing to wear but is clearly a running shoe. Unlike the previously reviewed On Cloud Terry, you may not want to wear them with jeans. However, you will want to wear them with shorts or tights because your run will be fast and furious and perhaps the echo of your boom will leave your competition in the dust.

Find a source to purchase them from On>>