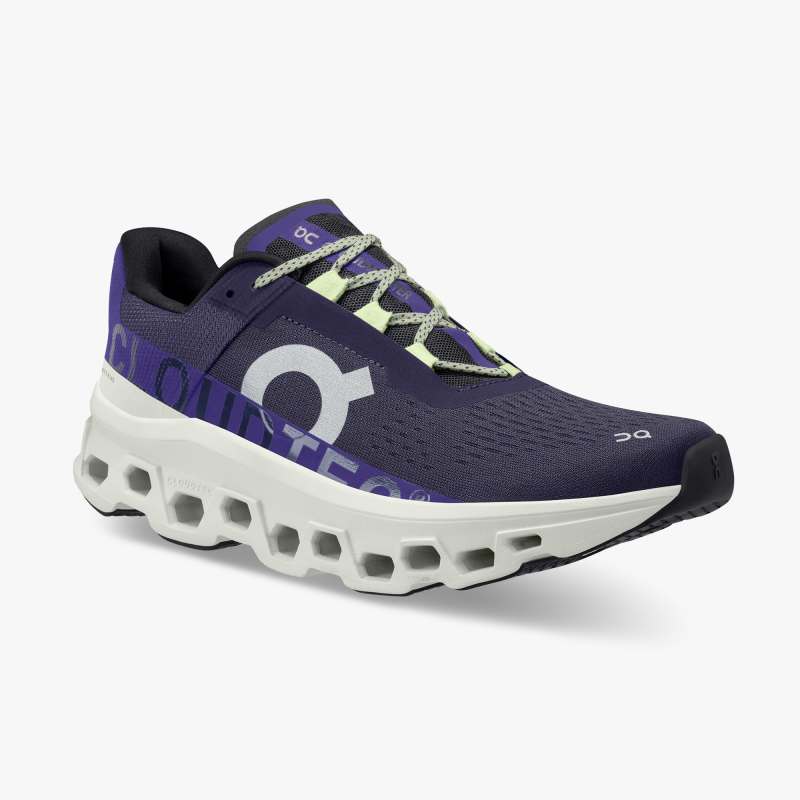 The On Cloudmonster road shoe is the latest cushioned — but neutral — shoe to hit the market during this new era of thick-soled footwear for distance runners. April 31 was the release date in North America.

As typical with On products, runners wear them for running, of course, but may also want to purchase two pairs because you are going to look great wearing them in casual settings. This is especially true with the Cloudmonster — they offer an outstanding complement to fashionable sweats or jeans. But this is not why we are here. We are interested in identifying whether these shoes are good for training in.

Yes, I (we) wear all reviewed shoes, run in them and bounce around the house and office (when they are fresh out of the box).

Two things came to mind during the run…

1. The landing feels just as it does when running on a damp (but not muddy-wet) dirt trail that is also firm. And this was while running on asphalt during 100 per cent of the run. Having just come off a running holiday on a Canadian Gulf Island (Hornby Island) and had run almost exclusively on dirt trails, I could not get the correlation out of my mind.

So, for 50-plus athletes, older walkers and athletes of all ages and abilities including the elite, when running increased volumes or back-to-back-to-backs, the Cloudmonster offers a break from the impact and harshness of concrete and asphalt while your muscles and tendons recover from previous runs.

2. Ankle stability. For someone who has sprained his ankles more times than he can count, stacked shoes are met with concern, even derision. I was anticipatory if I was going to roll my ankle when landing on the smallest of acorns or twigs with the high outer sole. This feeling disappeared immediately. The Cloudmonsters felt completely low-rise if you will.

The second wear test was over a mix of firm packed gravel, road, and dirt. The course was dead-flat and the run was at half-marathon pace for 12K, plus warm up and warm down of 3K each.

The Cloudmonster is no supershoe, but On is not offering a supershoe, here. This is a training shoe, yet one does not feel slowed by using them in a tempo-like effort. The entire run felt just as the initial run did for the feet. As for the fitness, blame that on the wearer (we won’t go there).

I ran with and tried to keep up with my 65-year-old friend “Michael” who was clocking sub-4:30s in the same Cloudmonsters. He is a former 31-minute 10K-guy and knocks 4-somethings off like they are nothing. He is still age-graded somewhere around the 31-minute range, so pretty fast. He said, “this rubber sole is made out of some sort of crazy technology and feels just amazing.”

In the boot of his Aston Martin can be found any number of random brands and models in various states of wear and muddiness. His beloved Cloudmonsters were as clean as a whistle (probably going out later in casual style; aviators on, do some cruising). Steve McQueen eat your heart out.

The upper is recycled breathable polyester. The tongue thin — I personally prefer a thin tongue. There was no slippage inside, even though I used a thin, poly performance sock (actually two, one on each foot).

At 200 Canadian dollars, 170 USD, 150 pounds or 150 euros, they are not cheap, but shoe prices have gone up like everything else, so the pricing fits if you consider how great this shoe is for repetitive runs. The amount of mileage increase one may be able to attain wearing them will be well worth the money spent.

As a neutral shoe they are not as flexible as others like the On Cloudboom Echo, but they are not overly stiff either. The On CloudTec materials provide a ride that is smooth yet firm, like that firm dirt trail I referenced earlier.

As a believer in minimalism (with the purpose of developing the foot’s natural strength), I also know that barefoot humans who roamed the earth never walked or ran on asphalt or concrete for three hours at a go — there simply was no concrete or asphalt. So, it is not natural to while away the hours on these hard surfaces. For that, us mortal bipeds have evolved enough to develop a shoe that provides the feel, looks, performance and cushioning worthy of the demands on our harder modern world.

There is apparently rumour and innuendo about the Cloudmonster fitting small. I have read this a couple of times. I am here to put an end to this alleged misinformation. I take a men’s US size 9. They fit perfect, in fact, I could have worn a thicker cotton sock, to fill in the wee extra space that was available. Michael agrees.

For someone sensitive to size, I do not know if early prototypes were small or what, but these Cloudmonsters fit perfectly.

I highly recommend these shoes, especially if you want to run more volume and repeat with doubles and back-to-back-to-back efforts. Save the supershoes for race day, and get out the Cloudmonsters for training, you will look good while you are at it, even if you don’t resemble a Steve McQueen-type or drive an Aston Martin.