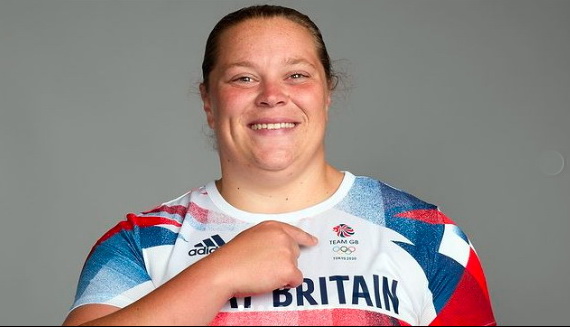 Sophie McKinna has been chosen as team captain for Great Britain and Northern Ireland at the World Athletics Indoor Championships which will take place in Belgrade, Serbia on 18-20 March.

The Great Yarmouth shot putter has been an ever-present member of senior British teams in recent years. Following silver success at the 2011 World Youth Championships and 2013 European Junior Championships, she has since won multiple British titles, has reached World, European and Commonwealth finals, and become an Olympian last year.

Last month she improved her personal best to 18.82m at the UK Athletics Indoor Championships, with Venissa Head’s 38-year-old British indoor shot-put record of 19.06m in her sights.

The 27-year-old will compete in the women’s shot-put final on the opening day of competition on Friday, going at 17:55 (GMT).

McKinna said, “I’m really pleased to have been named as captain. This is my tenth year representing Great Britain and Northern Ireland internationally. I’m technically one of the old guards on the team even though I’m not that old! So, it was a very special moment to receive the phone call, and I hope I can go out and lead the team well.

“It was a nice surprise to receive the call from Christian. It was a really proud moment. I rang my parents straight away and they were really proud of me as well.

“I want to be able to impart some of my knowledge and experience onto the team, especially the younger members of the squad, and try and inspire them to go out and perform this weekend.”

On her expectations at the Championship, she added,

“This is my first World Indoors and it completes my set of major championships. I’m really looking forward to competing. I’m in really good shape, I threw a PB in my last competition, so I hope I can back that up and produce again. I’ve made no secrets about going out and breaking the British indoor record, so my sights are still firmly set on that.”

“Sophie will do an excellent job as team captain, and I’m really pleased she has accepted the role. She has shown that she is a resilient competitor on the field and is a respected member of the British team off it. Sophie has really progressed well over the last few years and is a fantastic ambassador for the throws and for the sport. I’m looking forward to seeing her thrive in this role.”

Unfortunately, there have been four withdrawals from the team; Amelia Quirk (women’s 3000m), Jazmin Sawyers (women’s long jump) and Thomas Somers (men’s 4x400m relay) due to injury, and Victoria Ohuruogu (women’s 4x400m relay) has been forced to withdraw due to a positive covid test prior to travel.

Lina Nielsen (Shaftesbury Barnet) has been drafted into the women’s 4x400m relay team as a replacement for Ohuruogu. Also, Elliot Giles has made himself available to be involved in the men’s 4x400m relay.