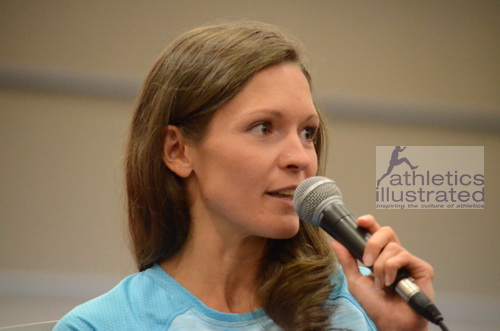 Earlier today it was reported by Canadian Running Magazine that there is a possibility that Canada’s fastest marathon runner, Lanni Marchant, will not be able to compete in the marathon during the Rio Olympic Games, even though she has run faster than the required standard within the time frame as set by Athletics Canada: January 2015 until May 29, 2016.

During the 2015 Toronto Waterfront Marathon, Marchant finished in the time of 2:28:09, (her personal best is the national record at 2:28:00). Additionally, she followed through on the proving of fitness requirements, by running a half-marathon in the time of 1:11:26.

There are two Canadian athletes who have run under that time, Brantford’s Krista Duchene and Marchant.

Athletics Canada is scheduled to make the full team announcement for all track and field athletes who will be nominated to compete in Rio on July 11th. This is the day following the Edmonton Olympic Trials that start on July 7th.

Apparently Peter Eriksson, the head coach at Athletics Canada had communicated to Marchant something to the effect, “no for now, but wait until July 11th.” Saying this does not definitively mean “no, you are not going to compete in that event,” but at this very late juncture, it sure puts a fly in the ointment for her final training plans, which is interesting as part of the qualification or ‘nomination’ process includes Mr. Eriksson overseeing athlete’s training plans.  She’s in limbo as we speak.

According to the published Athletics Canada Athlete Tracker, Wodak and Marchant are listed as fast enough for the 10,000-metres, while it’s Marchant and Duchene for the marathon.

So what is the issue?

The Marchant-Eriksson Rio Olympic communication debacle has now been further complicated by the fact that Eriksson tweeted, “Lanni has not been told she can’t run the marathon, this is misleading information. All decisions will be made by the NTC after Trials.”

Perhaps it is misleading, but what led her to believe that she is not in, for now?

It would behoove Mr. Eriksson to completely communicate with the public through social media and or with the traditional media or not at all. Telling Canadian Running Magazine, “I have no comment about her or anything in relation to the marathon team until July 11,” and, “Until that moment, there is nothing to say.” Just makes one of the two parties appear disingenuous, especially since he did having something to say over Twitter.

It is not July 11th yet, so why is it being discussed?

Proving fitness in the marathon is a dubious requirement; it should be removed or significantly altered.

“…on Monday, two days after winning the Canadian 10K championships in Ottawa, she did a 30K simulation run. That was to prove to Athletics Canada that not only was she fit enough for the marathon, but she was also fit enough to do both events back to back. (According to Marchant, Eriksson knew that this simulation run would be happening.) The marathon and 10,000m are 46 hours apart at the Olympics this year–a timeline which Athletics Canada takes issue with.”

Although Marchant proved that she can run well over 30K two days after racing 10K, that doesn’t necessarily indicate that she can race both distances that close together at her very best. What is likely at issue for Athletics Canada is sending athletes that have their best chance at placing within the top-8, top-12 and top-16 threshold benchmarks, which are indicated in the selection criteria. Fair enough.

Further to the thresholds, internationally, the marathon has proven to be a more competitive event over recent years, while other than a small handful of primarily East African competitors, the 10,000-metres event has waned a little. Does Eriksson believe that Marchant will have a greater opportunity to crack one of the three thresholds in the 10,000-metres rather than the marathon?

The Rio Olympic Marathon is likely to be run in very warm conditions. Heat during the marathon has a more deleterious effect on competing athletes than it does during a 10,000m race.  The average low and high temperatures in Rio during August are 19 to 26 degrees.

Proving fitness for the marathon without actually running a marathon is a dubious notion; it is a special event. The human body is well suited to race up to 20 miles (32K). For Marchant to run a hard 30K two days after running the 10K, may prove she is fit and injury free, but she still hasn’t raced – at this late date – the marathon. The latter 10K of a marathon is exponentially more difficult than at any point leading up to the 30K or 32K mark.

At this time there is no way to really prove fitness in the marathon without actually doing a marathon. That rule should be removed from the criteria or should be significantly altered.

For the 10,000-metres, Marchant proved fitness in Ottawa, by running 10K on the road, therefore by the letter of the qualification standards; she should be nominated to compete in both events, even if they take place just 46 hours apart.

If Eriksson indeed feels that Marchant will not be able to perform at her best at both events, being that they are so close together, he is speculating. What if she has a rough day in the 10,000-metres and two days later collects herself and races a top-8, top-12 or top-16 marathon performance? Will we know?

Marchant will already be in Rio anyway.

Without the support of the explicit language pertaining to conflicting events, Athletics Canada should acquiesce and chalk it up as a lessoned learned in public communication as well as criteria writing.