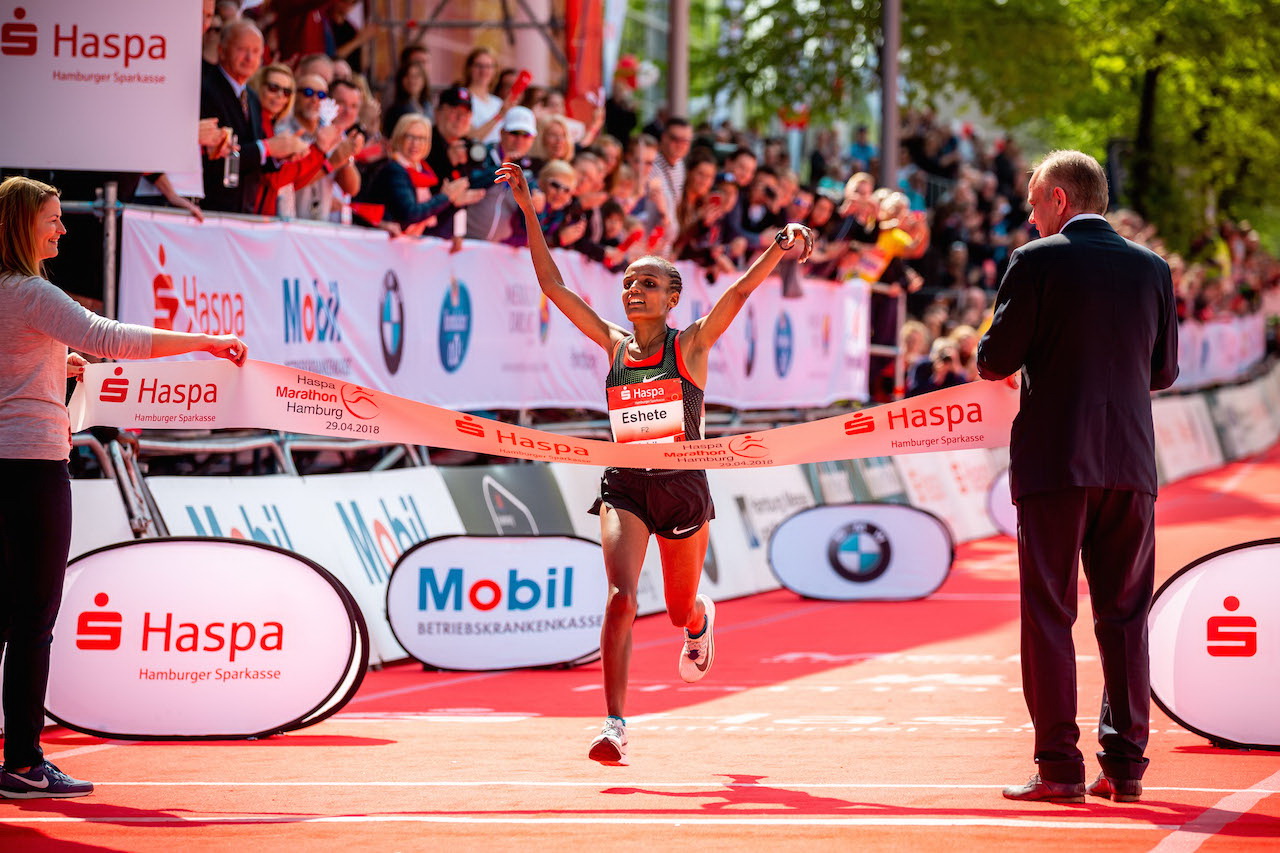 Ethiopians world-class runners dominated the Haspa Marathon Hamburg, taking all three places on the podium: Solomon Deksisa won with 2:06:34, the third fastest time ever in Hamburg. Debutant Tadu Abate took second with 2:06:54 while Ayele Abshero was third in 2:07:19. Kenya’s Solomon Yego finished fourth with 2:07:37 while the 2012 Olympic Champion Stephen Kiprotich of Uganda, was fifth in 2:07:57.

Shitaye Eshete of Bahrain won the women’s race with a time of 2:24:51 from Ethiopia’s Birke Debele who clocked 2:25:28. Mimi Belete, who competes for Bahrain, made an impressive marathon debut to finish third in good conditions in 2:26:06.

Including shorter distance events, a total of 33,183 entries were registered for the 33rd edition of the Haspa Marathon Hamburg. 14,250 of them ran the classic distance in Germany’s biggest spring marathon.

In contrast to recent years, the favourable conditions encouraged the organisers to believe that an attack on the course record, set five years ago, was a real possibility. In 2013 the Kenyan superstar Eliud Kipchoge chose Hamburg for his marathon debut and triumphed in the world-class time of 2:05:30. This year a group of 13 men went through 15 k in 44:38 which was right on schedule to put the course record under pressure. But the clock at halfway showed 63:02 for the leading group as hopes of the record faded.

Instead of a record pursuit, the race developed into a thrilling contest for the title. Emmanuel Mutai of Kenya was the fastest man on the start list with his 2:03:13 but was not in contention, running in the second group from the start to finish ninth in 2:11:57. By 30k several top names had fallen back including Kenya’s Sammy Kitwara, the Valencia winner with 2:05:15 last November.

“After 35 km all the top favourites were off the pace and that was good for me,” said Solomon Deksisa, who launched the first attack at 36k. But that didn’t decide the outcome because the 20-year-old debutant Tadu Abate made up the gap two kilometres later. “I was surprised but said to myself: No, today is going to be my day,” explained Deksisa, who attacked again at 40 km. This time Tadu Abate had no reply. “I had no pressure because I wasn’t the big favourite – that certainly was a help,” said Solomon Deksisa, whose winning time of 2:06:34 was only 12 seconds outside his personal best.

For a long time in the women’s race the leading group comprised seven runners and they went through halfway in 1:13:23. At 30 kilometres the leading group had been reduced to five: along with Shitaye Eshete, Birke Debele and Mimi Belete were Bahrain’s Tejitu Daba and Sylvia Kibet of Kenya. Daba and Kibet were the first to drop off the pace and the remaining trio reached 35k in 2:00:58. “At this point I wasn’t sure what to do because we were still all together. That began to change and I knew it would be my day,” said Shitaye Eshete, who went clear with around four kilometres remaining.

The 27-year-old Shitaye Eshete ran a personal best of 2:24:51. Her husband, Shumi Dechasa, who also runs for Bahrain, might also have been a contender for honours but the 2014 Haspa Marathon Hamburg champion developed an injury. “Shumi started having leg problems a few weeks ago which grew worse and that’s why he couldn’t come. He said to me: Go to Hamburg and win,” explained Shitaye, who arrived in Hamburg on the eve of the race on Saturday. She had been the last of the favourites to arrive but turned out to be first across the finish line.