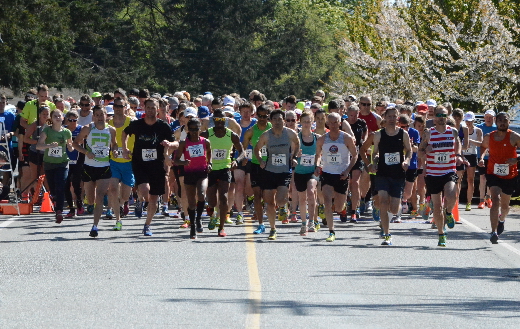 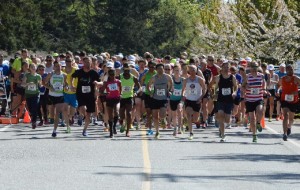 The last race in the Frontrunners Island Race Series – Sooke 10K – took place on Sunday under warm sunny skies. Hosted by the Island Road Racers, there were 303 finishers. The Island Series awards followed after the race.

Nick Walker from Frontrunners Athletic Club won the race in 33:59, second was Kyle Weagant (Prairie Inn Harriers) in 35:21, and third and top Master was Hugh Trenchard finishing in 35:56. This was Walker’s first win of the 2015 series. “I was happy with today’s run. I have been battling an issue with my piriformis muscle which is affecting every step but I was able to stay relaxed and comfortable,” he said afterwards. “I have a fair bit of fitness so I just need to make sure I stretch and massage this week so I am ready for the TC Half Marathon next Sunday.” Walker is the defending TC Half Marathon champion and hopes to better his time of 1:13:25.

The women’s race was won by Lemlem Ogbasilassie in 36:57 (also setting an age category record in the W25-29), second was Julia Tschanz in 38:29, and third was Jill Ramstead from CeeVacs Running Club in 39:36. Top female Master was Yanna Debelic from Bastion Running Club, finishing in 41:49. Susan Gordon (Salt Spring Sneakers) also set an age category record of 43:08 in the W55-59.

Craig Odermatt from the Prairie Inn Harriers won the overall Series title, second was Derek Vinge from Comox, with Nick Walker in third place. “I am very excited about this significant milestone,” said Odermatt. “When I first started running I never thought I would be good enough to win something like a Series. Especially a series with the history of the Island Series. I am extra proud to win the overall open title while a Master.” Claire Morgan, in her first year as a Masters runner, was the top female runner in the series.

Prairie Inn Harriers won the club standings with 3406 points, second was Comox Valley Road Runners with 2589, and third was CeeVacs Running Club with 1607.

“We couldn’t have asked for a better day to finish off the series,” said Cathy Noel, President, VIRA. “The participation in the Series was slightly down compared to 2014, but those that came out finished strong and stayed for the year-end awards, highlighting the overall achievements of the youngest category of under 15 to the 85-89 year old category with Maurice Tarrant. As we wrap up 2015 we are already looking towards the 2016 Series. Congratulations to all participants.”

VIRA partnered with the Victoria Hospitals Foundation for the first time year and raised $1,780 for the Foundation. When registering, participants had the opportunity to top up their registration and support the many rehabilitative services at Victoria General Hospital and Royal Jubilee Hospital.

Full race results are at: http://racedaytiming.ca/vira/2015 Historical results from races dating back to 1980 from previous race series can be seen on http://pih.bc.ca/results/island-series/Summary.php