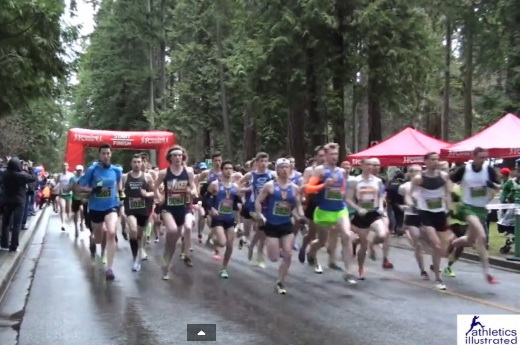 The BMO St. Patrick’s Day 5K that took place Saturday, March 18 in Vancouver’s Stanley Park, was a race that came down to a single second that split the top-three finishers.

The top-three men were Guelph’s Ross Proudfoot taking it with a very late sprint to the line in the time of 14:40. Rio Olympian Lucas Bruchet is given the same time but is credited with second place, while Geoff Martinson, finished third in the time of 14:41. Bruchet and Martinson are based in Vancouver, while Proudfoot is enjoying an extended training stint with Athletics Canada’s West Hub in Victoria.

Asked how the race played out in respect to his expectations, Proudfoot said, “The race went as well as it could have from my perspective. It was an early season race and my first time on the roads since high school. I had set out, just to have a solid effort and try to stay in contact with the lead group. Ultimately the pace set out quite slowly, which I thought was my perfect situation to have a shot at taking the race. I tried to conserve energy for the majority and was able to wind it up in the last 200m when the course finally started to flatten out after the final big hill. I couldn’t be happier to have a finish like that with a strong field.”

Dayna Pidhoresky of Vancouver won in an equally impressive women’s field in the time of 16:28. She finished 31st overall.

Asked about her race, Pidhoresky told Athletics Illustrated, “The race went well. That’s the fastest I have run on that course, but it is definitely not the fastest course out there. So yeah, I am very pleased with my race!”

“After a series of high mileage weeks and with my focus being on the 30K distance, I was happy to discover that I still had some speed in the legs,” added Pidhoresky. “I felt strong throughout, something I hope will also translate over to the race next weekend.”

She is referring to the Around the Bay 30K, the oldest race in North America. It takes place in Hamilton, Ontario. Pidhoresky won the race in 2011 and 2015. Other well-known Canadian winners include Lanni Marchant and Krista DuChene, who own the first and second fastest marathon times in Canadian history. Lioudmila Kortchaguina won the race three consecutive times 2002-2004.

Langley’s Regan Yee made a race of St. Patrick’s finishing in second and just six seconds back. Rebecca Bassett of Nanaimo finished third in the time of 16:49.

In the men’s masters race Vancouver’s Jeremiah Ziak finished first in an impressive time of 15:47. He bettered Vancouver’s Kevin O’Connor, who finished in 16:13. Victoria’s Craig Odermatt was third in the time of 16:34. Both Odermatt and O’Connor compete in the 45-49 age-group, while Ziak is in the 40-44 group.

As expected Catherine Watkins won the women’s masters race. She finished in the time of 17:18. Jillian Fong was the second master and she competes in the 50-54 age-category. She is credited with the time of 18:05.

The first 40-44 years old female was Melanie Kassel, who was the third master, she crossed the line in the time of 19:08.

There is a timing mat located at the first mile. There is additional prize money for winning it. Proudfoot is credited with the fastest first mile time. He recorded a 4:36, while Vancouver Kevin Friesen went for it and lost by a second. Declan White of Langley ran the first mile in 4:38. There were 29 men who ran under 5:00.

The top two women were Regan Yee and two-time Olympian Hilary Stellingwerff. They were credited with 5:01. Pidhoresky was third in 5:02.