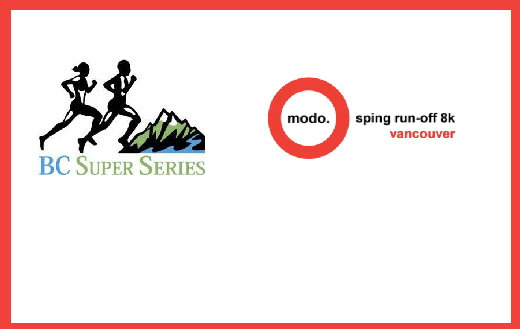 Another star-studded field will toe the line for the Modo Spring Run-Off 8K, the fourth race in the BC Super Series, on Sunday morning in Vancouver’s Stanley Park.

Headlining the Canada Running Series event is one of Canada’s best marathoners with aspirations of qualifying for the Olympics later this year. Rob Watson has the London Marathon on April 24 as his primary goal. Before that he will be representing Canada at the World Half Marathon Championships in Wales on March 26.

Despite winning the first BC Super Series race, the Harriers Pioneer 8K in January, with marathon preparation in his legs Watson will be hard pressed to win by two in-form shorter distance specialists. Calgary’s Trevor Hofbauer made up half of Canada’s NACAC 10K winning team in Puerto Rico last month. While Kevin Friesen beat Watson by 21 seconds last weekend at the BC 5K Championship.

Adding a new mix to the field is another Canada international Terence Attema, who recently move to BC from Ontario.

The women’s race does not have the same depth of caliber as the men, but is led by the same 1-2 as topped the podium at last Saturday’s St Patrick’s Day 5K, Rachel Cliff and Dayna Pidhoresky. Cliff won the 5K Championship in a course record 16:05, with Pidhoresky 35 seconds back. And Pidhoresky won the “First Half” Half Marathon in February. Whoever wins on Sunday will likely move to the top of the BC Super Series rankings.

Watson meanwhile is all but assured of remaining top of the men’s rankings, having run all races to date.

Watson was pleased to learn that Music Heals is the featured charity in this year’s Modo 8k, being a huge music lover himself. In fact, the Executive Director, Chris Brandt, will be among those who toe the starting line but with slightly different expectations. Brandt says he is delighted the charity will again benefit from the association with Canada Running Series.

Racing gets underway at 10:00am, with the start and finish located at the Stanley Park Pavilion. And in keeping with the charity theme, the post race party will feature live music from Dominique Fricot.

The BC Super Series is a collaboration between BC Athletics and 12 of BC’s best road races,http://www.bcathletics.org/BCSuperSeries/. The next event is the Vancouver Sun Run 10K on April 17.