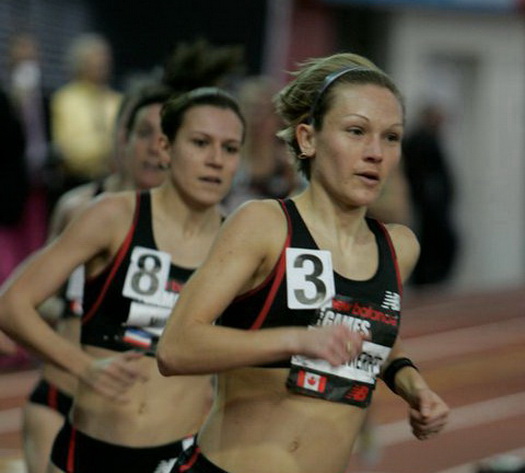 Middle-distance runner Hilary Stellingwerff is planning to compete for Canada at the 2012 London Olympic Games. She has raced in the Commonwealth Games, IAAF World Cross Country Championships, World Track and Field Championships and the World Indoor Championships.

Originally from Sarnia, Ontario, she recently relocated to Victoria, BC by way of Lausanne, Switzerland. During the time this interview took place, she was on her way to New Mexico, to take in some altitude training to supplement her winter base mileage.

Christopher Kelsall: Welcome to Victoria. I trust you are finding the endless urban and rural trails to your liking?

Hilary Stellingwerff: Thanks, it’s a great city and we’re happy to be here! Trails have been fantastic. We live across from Elk Lake so that’s a staple, but we’ve also hooked up with some local runners (Marilyn Arsenault and company) who have shown us more extended rural trails – Interurban, Thetis (Lake), etc.

CK: Marilyn is awesome, but don’t let her get you lost or hooked on bad burgers.

HS: Okay, I’ll stick strictly to the “good burgers”. I heard Ferris’ is the place to go!

CK: Correct. You have 1200 choices in Victoria, Ferris’ ranks right up there. What precipitated the move from Lausanne, Switzerland to Victoria, BC?

HS: My husband Trent took a job with the Canadian Sports Institute Pacific (CSI). He has his PhD in Exercise Physiology, so he’ll be doing some exercise science research and working with targeted Olympic sports, mainly rowing, but also athletics and triathlon.

CK: You grew up in Sarnia, Ontario, yes?

HS: Yes, that’s right. My parents still live there and Trent and I met there.

CK: Reading your blog, the basic training principles you have written on the home page are very very sound. How is your patience and tolerance? Do you enjoy the toil of building a base and running longer miles?

HS: Thanks, that’s a compliment to my coach Dave Scott-Thomas and Trent who are the ones that help put my training plan in place and have greatly influenced my own training philosophies.

Although I love running fast on the track, I really look forward to this time of year where I’m doing quite a lot of base mileage (at least for a 1500-metre runner) averaging about 125-130K a week with a long run of up to 2hrs and two workouts a week, plus the plyometrics and circuits.

I haven’t even touched the track since August and I think that really helps keep me fresh for when track season comes around because by then I’m dying to get on it. I have done quite a bit of training with some Ethiopian athletes and I have learned so much about what it takes to be at the world-class level – even in middle-distance. They are running so many miles and take training and recovery as a lifestyle. Marilyn and I are actually heading to Albuquerque for the first three weeks of November to live and train “African style” at altitude with lots of miles and the recovery needed to go along with that.

In terms of patience/tolerance – I think it helps to have some people to do the long stuff with, so I always try to have some training partners. Trent is the most consistent one for me, but it’s been nice to have some more here in Victoria, and when I’m in Guelph training with Dave and Speed River (Track Club) we have tons. I’m trying to recruit more people to join us here in Vic – it seems like there are so many good athletes training in small groups and I’d love to see more collaboration so we can help each other out, even if it’s runners, triathletes, etc. I ran with the rowers last week and they hammered me, but it was fun to mix it up.

CK: Other than leading a simple life and running good volumes, was there any other eye-openers you experienced training with the Ethiopians?

HS: They really value rest and recovery so that means long naps and healthy, but hearty food, right after training. They don’t necessarily know all the science behind it, but they seemed to have figured it out and stick to what has worked.

The expectation for greatness and the competitive drive was unbelievable in Ethiopia. Even for the greats like Haile, Defar, and Bekele, they’re respected, but that doesn’t mean there is a set pecking order for other athletes – there are hundreds of amazing athletes waiting in line for a chance to compete outside the country and they have no problem taking over if they see an opportunity – it’s their way out of poverty and chance for a better life as well as incredible recognition from their country. I learned a lot about how important it is to find your own personal motivation for success. I didn’t grow up in poverty so it’s not about “getting out”, but what I did take from this mentality is you have to thrive on challenge and success to be great and be ready to go through the trenches in training. The Ethiopian philosophy I experienced was to train so hard that racing feels easy and recover so “hard” that you can survive the training. It was a very motivating environment to be in, but I’m sure it can also burn a lot of athletes out so it’s a fine balance to be consistently at that top. I think you have to train hard, but smart.

CK: So have you taken on the “train hard, rest hard and train smart” philosophy for your own training practice going forward?

HS: I definitely try. I know my body pretty well and have a good feel for when I can push and when I should back off. But I still depend on Dave and Trent to act as good sounding boards for me when I’m on the edge – I think even athletes who are self-coached or really independent need someone to bounce ideas off. I have the tendency to want to get involved with a lot of different things in and out of running and I have to be reminded to slow down and make sure I’m getting the necessary downtime between training. I would say the Africans are much better at doing nothing between training than North Americans or Europeans. But I definitely make a concerted effort at it.

CK: Were you in a camp in Ethiopia or in Europe?

HS: I was at a training camp in Addis Ababa, Ethiopia with some Europeans and Ethiopian athletes, but I’ve also done a lot of training with Maryam Jamal (2007/2009 1500-metre World Champ) who lived just down the road from us in Switzerland over the past five years.

CK: Are you going to compete in the 2012 National Track League then head over to Europe for competition?

HS: I’ll most likely do a few of the NTL meets before Nats and then over to Europe for the rest of the summer.

CK: Competing in the 1500-metre event, how far out from track season do you begin adding in the anaerobic quality training?

HS: We hit it a bit leading into indoors in late Dec/Jan – maybe once a week on the track. Then we go back into more of an endurance phase in March/April after indoors, probably starting into more 1500-metre specific work in late April and early May. Every athlete is different, but I find I don’t need a ton of that high-end work. It takes me about a month to fully adapt and a couple of races and I’m usually okay.

CK: Being that 2012 is an Olympic year what goals do you have for spring outside the obvious qualification goals?

HS: My goal is to have at least one Olympic qualification time out of the way (I’m planning to go to Australia in Feb/Mar to get an early qualifying time) so I can do another altitude training camp in April and get ready for a fast summer peaking for London in August!

At altitude camp in New Mexico

CK: How is training going now that you are in New Mexico?

HS: So far it’s been great! I’m really happy with my adaptation this time around, it’s been quicker than in the past and I’m recovering well so I’m looking forward to seeing the benefits of this hard training.

CK: Good luck with your training and racing.