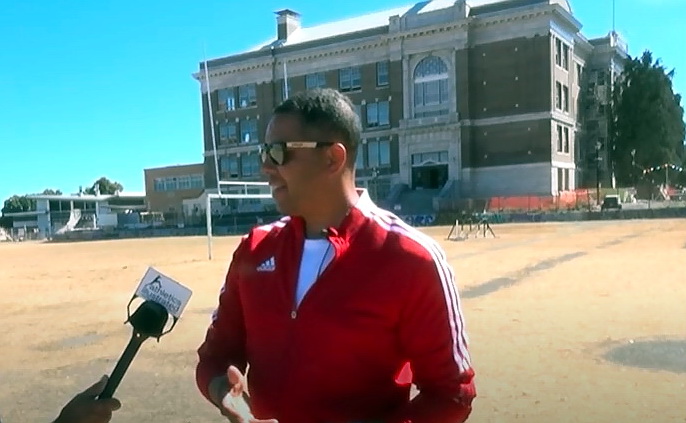 Vic High was established in 1867. The current building was erected in 1914. The track and mini-stadium and natural grass field were all built in 1949 to honour students who had fought during World War 11. It is named Memorial Stadium for that purpose. It is now well-documented that the re-build of the stadium, which would include a field house, lights, new seating, artificial turf field, and a rubber 400-metre track (to replace its current 400-yard cinder track) has been mishandled by the Greater Victoria School District.

A state of disrepair…

Vic High property is in an embarrassing state for a city that promotes itself as a sports and recreation hub, and a billion-dollar, world-class tourism destination. The school is in line for a seismic upgrade that will cost $79 million in conjunction with Vic High’s upgrade of Memorial Stadium, which required a separate fundraising initiative by the Alumni. By the time the Ministry of Education announced funding for Vic High’s seismic upgrade in June 2019, secret negotiations for an 8-metre easement had already occurred. Therefore there was no longer enough land for the eight-lane metric track.

While other schools nearby have new, state-of-the-art facilities, the promise to Vic High was secretly altered in order to accommodate the demands of the developer for more land. Four-time Olympian Lorraine Moller, who raced in Victoria several times during her career and has many fond memories of the city, is shocked. “it is outrageous,” she said when informed about a revised track from eight-lanes to a two-lane walking track.

“These kids are getting sold out. Thank you for sharing this with me and add my name to support the Friends of Vic High.” Four-time Olympian Rod Dixon from New Zealand, who raced at the University of Victoria’s Centennial Stadium and on the streets of downtown added his name along with some well-known locals. Deb Scott, who medalled in the Commonwealth Games and won the prestigious Fifth Avenue Mile is a schoolteacher and fitness and health advocate. Diane Cummins, who called Victoria home for several years ran internationally for Canada and once held the national 800m record. Lori Chestnut (nee Bowden), is a two-time World Ironman Champion, she earned silver four times and bronze once.

She said, “it is appalling to think they want to make a two-lane track!”

The group already has the support of international rugby player Hans de Geode, NFL Superbowl champion Moe Elewonibi and Chris Marsh, former University of Victoria and professional basketball player. A dozen others have added their names to provide support including Bob Reid. Prairie Inn Harriers Running Club Reid is known as Mr. Running. “When I was racing actively in the ’80s, ’90s and early 2000s, I used to train on the Vic High track twice a week doing mile repeats and ladders and faster stuff. I would hit the track while running home from work. I used to joke that Vic High track was the only one in Victoria that had hills!” He added, “it will be a travesty if only two lanes are forced by the land swap. Ridiculous.”

The Prairie Inn Harriers supply most of the equipment and volunteers for the GoodLife Fitness Victoria Marathon, TC10K and operate several races around Greater Victoria including the Pioneer 8K, which is often designated as a provincial or national 8K championships race, as well as the Harriers Elk-Beaver Lake Ultras, which some years hosts the national 50K championships. For 2020, the Harriers were integral in the running of the Pan Am Cross Country Championships and will be hosting the provincial championships in the city as well.

The revised track plans do not sit well with the sporting community.

If interested in helping the Friend of Vic High, please email: info@athleticsillustrated.com