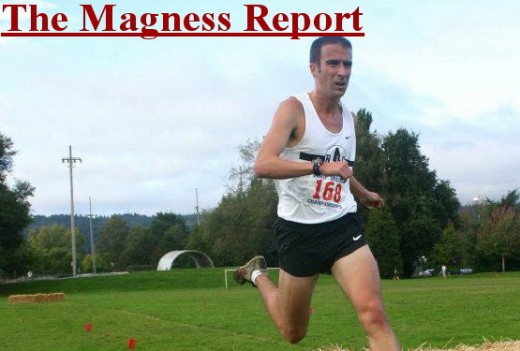 Steve Magness writes science-based running and training articles primarily for the website The Science of Running.

Christopher Kelsall: Hey Steve, did you write an entire article at The Science of Running about Viagra potentially improving performance as well as providing a stroke volume increase?

Steve Magness: Yes, I somehow did. I’d always joked around about Viagra improving performance but never thought too much of it until it started to get some press because some NFL guys said they took it. So I figured I’d put out a scientific review of what it might actually do and if it works.

CK: So is there an improvement in performance for endurance athletes taking Viagra?

SM: We don’t really know, but the studies show that in certain people at high altitudes, yes there is. It really depends on what the person’s limiter is at altitude. Viagra improves one specific component of how you handle altitude.  If that component is a person’s weak link then yes they will get a benefit. But at sea level or even moderate altitude, it’s unlikely.  So don’t go popping Viagra!

CK: Okay, I’ll stop. In layman’s terms can you explain what a limiter is?

SM: Sure.  It’s the weak link of the chain. So if we look at exercise, all these different physiological mechanisms combine to give us performance. Everyone has their own strengths and weaknesses, and those weaknesses might be the limiter. So for example, in physiological terms, if we look at oxygen delivery, there are several steps from breathing it in to getting it to where it’s used in the muscle. So someone might be limited by exchange from the lungs to the blood, while another might be limited by transportation from blood stream to muscles, or even maybe from blood into muscles and then mitochondria.  It all depends on where the slowdown occurs.

CK: Interesting case study that you site at The Science of Running, where it is found that tripling (running three-times daily) versus single longer runs for mice, did not appear to provide any difference in vascular stimulus, am I reading this correctly?

SM: Exactly.  It’s an interesting study because even if you go back to the old writings of Arthur Lydiard, he always pushed for sustained aerobic running for increasing capillarization. With himself and then others promoting that line of thinking, that idea has stuck for decades. What’s interesting about this little mice study is that it demonstrates that it’s not that simple. The stimulus for capillarization and a couple other factors isn’t just sustained aerobic running. You can get the effect with multiple runs a day adding up to the same volume.  So the question is why?

CK: Do you think the training regimen could have been varied day to day? For example some classic programs require one Sunday long run, two semi-long runs, one fartlek session and plenty of easy running in a single week, during the base phase. It appears the mice had the same 30 minute regimen every day.

SM: Oh yes, without a doubt. Things get complicated once you start applying real world training to it. This is what I’d call a proof of concept study, where they try and isolate one variable.  In the real world, things get complicated because you are essentially stacking training stimuli on top of each other.  Which begs the question, what happens when you mix all this junk together?  We know for example that if we mix strength work and aerobic work together, it changes the effect that each individually has. Does the same hold true for every other kind of training? Probably, but we don’t know what or why yet. That’s where best educated guess and spending hours hypothesizing comes in.

CK: The same people at Experimental Physiology found that four weeks of intense interval training did not produce improved capillarization. Are mice that different, that perhaps lab rats, for cardiovascular observation continue to be human?

SM: Ha, once you get talking about mice, rats, or any other small animal it’s a bit of a crap-shoot. I think what that shows is that intensity matters when it comes to capillarization. Capillarization is interesting because it’s a balance issue. If you look at the signalling pathways involved, to get the end result of capillarization it’s a balance between activating one thing and turning off another. To get complicated if you activate the VEG-f and get a decrease activation of TSP-1 you get a big increase in capillarization. So, it’s a weird balance that has to be met without getting terribly complicated.

CK: So the uncomplicated version is to run long, semi-long and steady, alactic strides, fartleks and lots of easy running, when not doing season-specific work – in other words variety and volume, yes?

SM: Yep that’s the key. Vary it up. In a base phase, you need to build all components. Just get good at them. How much depends on the person, but you’re trying to throw a lot of different stimuli at it to build everything up. It’s not until the specific phases where you start putting them together in the right order. What these little research studies on the minute details consistently do is tell us there are a lot of different stimuli to get various adaptations. That’s why long slow distance vs. intense interval work is a misnomer and a fallacy. You need all of it.  Just at varying times and in varying amounts.

CK: What are your thoughts on Ryan Hall moving to work with Renato Canova?

SM: It’s a brilliant move. Ryan is a really smart guy and knows what he is doing, but sometimes you need that objective outside source to make key decisions. Canova is a brilliant coach. Some of the best learning experiences of my coaching career have been in exchanging emails or conversations with Renato. The biggest compliment I’ve ever received in coaching was from him. When I gave a presentation at a conference he was at last year, he came up to me and said essentially “if English was my native language, my presentation would be exactly like yours.” So the point is, Ryan is in great hands and he’s going to do big things. I’m really excited for Ryan and he and Sara are absolutely phenomenal people. Sara is a pleasure to work with, so I’m always rooting for good people in our sport, who do things the right way, to succeed.

CK: What do you have coming up for readers to check out at The Science of Running?

SM:  I have a couple different articles planned. I’m in a kind of philosophical mood, so I am going to explore the learning process a bit and how that ties into coaching. For example, the human brain is essentially designed for pattern recognition. That’s how we process things. So in coaching, there are certain times when this is brilliant, and then there are certain times where it’s a detriment and we begin to see patterns where there aren’t any just because our brain loves patterns so much. So that’s one topic I’m exploring a bit, and then another is fatigue. I’m looking at simple ways to measure mental fatigue and tying that into workouts. For example, with my college team I’m going to see about running a small study looking at how mental fatigue and pain tolerance change pre and post workout.