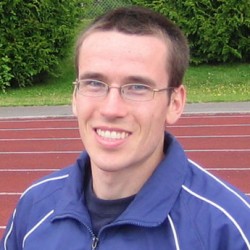 Kris Swanson recently achieved an impressive personal best at the 2010 IAAF World Mountain Running Championships, which took place in Kanmik, Slovenia, by moving up 34 spots from his previous best of 64th position that he achieved during the 2009 event.

Swanson, ran for the University of Victoria Vikes while mostly studying Kinesiology.

Since graduating in 2008, Swanny has continued to run well locally on the road and trails. He looks forward to a new personal best to happen this Sunday, October 10, 2010 at the Goodlife Fitness Victoria Half Marathon, which takes place in Victoria, BC.

Christopher Kelsall: Congratulations on your big improvement at the IAAF World Mountain Running Championships. Having finished 30th, it is interesting that your goal happened to be  top-30.

I feel like I ran the course very well and pushed my ability. 30th was the result of that effort and I am quite happy with it. I only found out that I was positioned just outside the top 30 with about 2.5km to go in the race. The race course itself can really dictate how well you match up against other competitors so it is somewhat of a coincidence that I finished exactly in my goal position of 30th.

CK: Did you have a chance to meetJonathan Wyatt?

KS: I actually met Jonathan at Commonwealth Mountain Running Championships last year.  He is quite friendly and has such a modest personality you would never know how big of a legend he is by just talking to him.

CK: You moved up in the field well over 30 places from 2009. What did you do different this time to improve that much?

KS: Fitness was no doubt a factor. I also spent more time training on long steep hills, which I believe made big improvements to my aerobic capacity and really strengthened my ankles. I also attempted to correct a few errors that I made last year in preparing to race in a different time zone. This year I arrived in Europe earlier and changed my sleep strategy based on some advice I received from Joel Bourgeois last year.  As a result, I felt much more rested when I toed the line.

CK: Where you running in Broadmead up the side of the ridge – from Cordova Bay to the top of Sea Ridge or in that area?

KS: We did a bit of hill training in that area earlier in the year. I really like the steep hill workout Jon has us do up there. Other that that, I spend a lot of time just easy running up and around Mt. Doug.  It’s not the biggest trail system there, but for some reason I find it very entertaining. One might say that I actually have…fun…when I run at Mt. Doug.

KS: I’m really looking forward to the 2010 Cross-country season. Whether Canada sends a team to Worlds or not, it is a goal of mine to qualify for the national team. In 2011 I look forward to getting some more personal bests. Depending on the how the next 6 months go, I would either like to make a long awaited return to the track or try a marathon…perhaps both!

CK: I knew that you are the King of the mountain, or rather Emperor of the mountain, up in Tumbler Ridge, BC, but I had no idea you were inducted into the Tumbler Ridge Sports Hall of Fame. That is auspicious business – you have won the Emperor’s Challenge half marathon at least 8 times. Do you have plans to return to make that number a nice even 10 out of 10?

KS: I would like to get 10 in a row, but I would have to wait (and win!) 7 more years. I’m currently 11 out of 12 and on a three year win streak. At this stage, I just consider myself privileged to be able to run the Emperor’s Challenge year after year. Crossing the line first is always a bonus and never assumed. The race is really picking up steam with record numbers of participants and ever increasing competition. I plan on making the annual trip to the most beautiful place in the world, or as you called it, Tumbler Ridge, for as long as I can.

CK: Did you grow up in Tumbler Ridge?

KS: I moved there in grade 9. I left after grade 12. I was actually born a prairie boy, yet I consider Tumbler Ridge my hometown. I guess it was the birthplace of my running career.

CK: How was the running environment up there?

KS: Phenomenal. In the summer, there is an incredible network of trails at a wide range of altitudes. There is no shortage of hills and runnable mountains. In the winter, there is some of the best cross-country skiing you will ever find. My first experience on an indoor track was a 3000m race at the Butterdome in February. All I did for training was cross-country ski and run on the treadmill a few times. I ran a 45 second personal best. I freaking love that place.

CK: Where in the Prairies are you from? I am guessing Saskatoon.

KS: Good guess. I was born in Saskatoon, but was living nearby in the small town of Delisle. I spent most of my teen years in Lloydminster, living on the Alberta side, but going to school on the Saskatchewan side.

CK: How about your business Inertia and your Kinesiology studies. What brought you to this type of a career?

KS: Like many high school grads I had a tough time trying to decide what I wanted to take at University. I spent my first year taking courses from all sorts of disciplines. The only thing that I discovered is that I am interested in all sorts of disciplines! Eventually, though, my athletic endeavours led me to believe that Kinesiology would be a sure fire bet, and I haven’t questioned it since.  Working for Inertia has been exactly the role I was looking for when I was finishing my degree. I have an extraordinary amount of flexibility in my position which makes my training much more enjoyable and building my race schedule virtually stress free.

CK: What level of hockey did you get to, before turning your focus to athletics?

KS: I don’t know, I haven’t got there yet! I put my focus into athletics when I got injured during Junior tryouts. I would say I was already an avid runner at the time, but I was in grade 12 and my hockey options that year became very limited.

When I finished my last year of eligibility at the University of Victoria, I took to the ice again for a little break from heavy training. I played a season with UVic in the BCIHL. I guess that would be the highest level I’ve played at.  We went undefeated that season and were BCIHL champions. Naturally, I retired while on top.

KS: Forward. I jumped around from wing to centre from season to season. I would say I skated most shifts on the right wing.

KS: It’s hard to determine what typical is, but here is my best shot. Mondays and Fridays were usually an easy double in which I would try and run in the hilliest areas in Victoria (this is where Mt. Doug came in). Tuesdays were typically a longer workout or tempo, with Saturdays being a faster group workout. Thursdays I ran long, and Sundays I ran semi-long. Wednesdays were off or “cross training” (also known as hockey). With this program I managed to get plenty of opportunities to hit the inclines and strengthen the hips and ankles, while still maintaining 10k speed. It worked out well considering we don’t live in the most mountainous of places.

CK: Have you had an increase in your general volume? If so, how are you handling the increase?

KS: Not really. In fact, I have been running slightly less mileage since I’ve been training with Jon.  I say that now, but my total volume has been slowly creeping up over the last year and a half. I really believe that the body constantly needs a changing stimulus so if my mileage continues to creep up, I welcome the increase.

CK: Do you have a favourite type of workout?

KS: I like progression runs. But they are only fun if I am fit.

CK: As a good post-collegiate runner, you seem to be getting stronger at longer distances.

KS: I’m not convinced that I am better suited for the longer stuff just because I’ve made some improvements at those distances. Part of me thinks that I’m getting stronger at the longer events because that’s what I’ve been training for. I have a feeling that I still have some middle distance personal bests left in me. That’s not to say that I don’t want to move up to the marathon at some point, but I think I still have a bit more trimming down to do before I could produce a serious time over 42k.

CK: Jon Brown, said that when he switched to higher mileage at strong aerobic paces, he achieved new lifetime personal bests at shorter distances. Do you think that perhaps you are just becoming a runner with greater endurance and that is reflected in all distances, middle and longer?

KS: Absolutely, my greater endurance is reflected in many distances; however, I don’t think that is the only reason for me to try a few more middle distances events. I think my body type is perhaps better suited for the middle distances. Either way, I am a firm believer in miles and my improvements suggest that I’ve really benefited from having a stronger base.

CK: Personal bests are what will drive you to run middle distance events then? Or something more lofty like making money in Europe or hitting standards?

KS: Every race brings about a different goal. But personal bests are a major fuel behind most events.  At the end of the show when I hang up my runners, there are a few race times that I’ve always wanted to have under my belt since the dawn of my running career. But then again, achieving personal bests is not always referring to the clock either. World Mountain Champs this year was a personal best by position and I plan on doing everything in my power to get another personal best next year.

CK: What have you found different about Brown’s approach that has helped you since having him coach you?

KS: Jon and I have a similar approach, which is one reason why I think things have been working as well as they have. I really like Jon’s workouts. There are some pretty tough ones in there. One big difference in what I am doing now compared to my University days is an increase in interval length and a decrease in interval rest. I mentioned before that my miles were actually higher when I was self- coached, but the workouts now are harder with Jon. I like that.

KS: I’m not exactly sure how well I will adapt from mountain running to a Half on the road in this time frame. That’s basically my cheesy way of saying I have no idea what to expect. I know I should be running a personal best. If all goes well I don’t see why I couldn’t make a sizable improvement of around a minute.