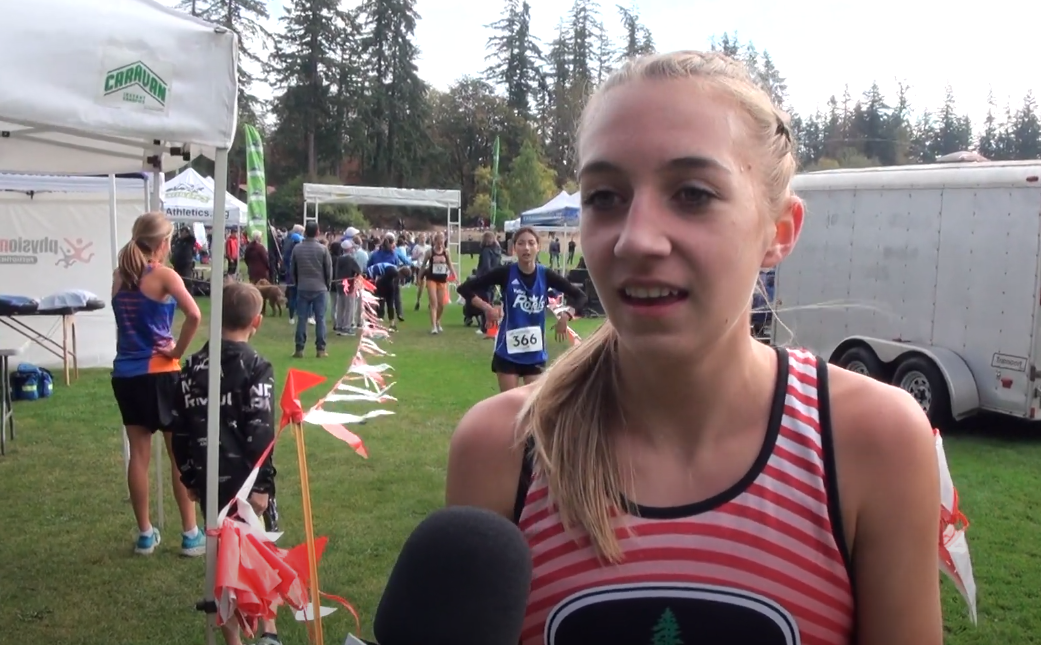 For the first time since 2014, the BC High School Cross Country Championships will be contested in Greater Victoria. The race will feature approximately 900 high school-aged athletes competing in both individual and team events.

“This may be both the most stunning setting ever for a BC Championships, with the vistas of the Juan de Fuca Strait and the Olympic Mountain range and the beauty of Hatley Castle,” says course designer Jeff Hunt. “This will also be one of the most viewing-friendly courses as spectators will be able to cheer the athletes on over two creek jumps, multiple challenging corners, steep climbs, and a long straightaway for exciting finishes.

And we have some of the best runners in Canada competing this weekend — it will be a truly special event. Royal Roads University has been very generous in allowing all these high school runners to challenge themselves on such a beautiful campus and we are excited to have the best high school runners in the province here to experience it.”

Locally, the Senior Boys race will be another battle between Oak Bay Secondary School and Nanaimo District Secondary School (NDSS). Tyler Brown of Oak Bay won the Vancouver Island championships, leading his team to a slim two-point advantage over a very deep NDSS team. In the Senior Girls race, Ruby Broadbent will be the person to watch. During COVID, Broadbent started to train for running to keep fit for playing soccer and went from novice running to 2021 Canadian U18 Cross Country Champion in one year.

Ella Ballard of Royal Bay SS is another high-performing runner and will competing for a spot on the podium at these championships. The Senior Girls team race will feature Oak Bay and Dover Bay Secondary School battling it out, after Oak Bay narrowly won the Island Championships by two points over Dover Bay.

The junior races will be exciting to watch, especially with talents like Charli Mlotshwa of Oak Bay. Mlotshwa, a Grade 10 athlete, finished 7th overall at both the 2022 Times Colonist 10k in April and the recent Royal Victoria 8K on Thanksgiving weekend. He is undoubtedly a favourite in the Junior Boys race, leading his Oak Bay teammates with their sights on winning the team banner this year.

Meanwhile, Alexa Dows of Frances Kelsey Secondary School has established herself as the top runner on the island, it is the sheer depth of the Junior Girls team from NDSS that should have all the teams in BC worried. They run as a pack at the front of the race and will also be looking to bring a team banner back to Nanaimo.

Around 900 athletes are expected to compete over the picturesque and challenging cross-country course at Royal Roads University. The BC High School Cross Country Championship occurs Saturday, November 5th, 2022. Para athletes will race over a 2km course, junior boys and girls race over a 4km course, and the senior boys and girls race over 5k. Races begin at 9:15 a.m. with the para race, followed at 10:00 a.m. with the junior girls who are followed by the junior boys at 10:45 a.m., the senior girls at 11:30 a.m. and the senior boys at 12:15 p.m. Awards will begin promptly at 1:00pm on the grounds of Royal Roads University.

The meet will take place on Saturday, November 5th, 2022 at Royal Roads University (2005 Sooke Road, Colwood, BC in Greater Victoria).

Awards will be handed out at the site beginning around 1:00 p.m., with Olympians Simon Whitfield and Hilary Stellingwerff handing out the ribbons, medals, and team banners.