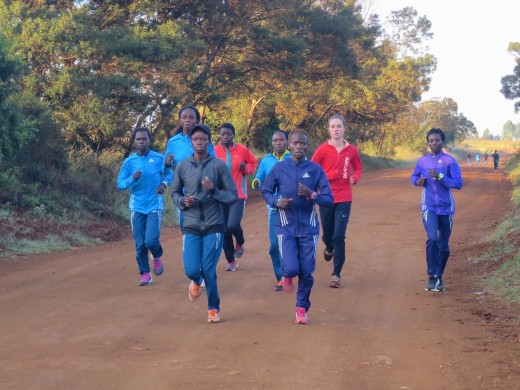 Lured by the challenge of the ‘classic distance’ and, with a few years of high altitude training in Kenya behind her, Tarah McKay-Korir will compete in the Scotiabank Toronto Waterfront Marathon, October 18th.

In addition to being an IAAF Gold Label race for the first time the event will also serve as the 2015 Canadian Championships.

A junior star, who represented Canada at three successive IAAF World Cross Country Championships McKay-Korir, has slowly built up to this point in her career and encouraged by her husband, Wesley Korir, the 2012 Boston Marathon champion, she feels this is the time to debut.

“The marathon distance is something I have always wanted to cover someday,” she said from her home in Cherangany, Kenya. “ I don’t know if I will ever feel completely ready but I am confident in the training that I have been doing. I ran my first two half marathons this spring so I had started increasing my mileage earlier this year.”

In March McKay-Korir made her half marathon debut in Prague finishing cautiously in 1:13:39. Training under the guidance of Wesley, who is one of Kenya’s top marathoners, she has been running between 80 and 100 kilometres a week at high altitude with one long run of up to 32km weekly.

“I am hoping to use my debut marathon as a chance to raise money to provide scholarships to the young runners we have been mentoring in Kenya,” she adds, referring to the Transcend Running Academy she and Wesley together with the producers of the film ‘Transcend’ – a film about Wesley Korir’s life – have started. “I know how fortunate I was to get good coaching and resources in high school and university and I want to help athletes in Kenya to reach their potential.

“Many Kenyan runners lack fees to go to high school and our goal with the running academy is not only to create great runners but great future leaders of their Kenyan communities which will not be possible without an education.”

To help improve the areas of education, health and agriculture Tarah and Wesley, whom she met while running at the University of Louisville, founded the Kenyan Kids Foundation. The Canadian chapter, which is chaired by Tarah’s father, Blair McKay received official charitable status in Canada last year.

Already the Foundation has had a major impact in the Cherangany region where Wesley was elected as a Member of the Kenyan Parliament and where the couple and their two children live most of the year. With a combination of fundraising measures and donations from Canadian companies such as the Gay Lea Foundation four gigantic milk coolers together with power generators were delivered earlier this year.

Volunteers are helping construct water towers, wells and septic tanks as part of the project. In addition, a representative from Semex Canada spent a week speaking to Kenyan farmers about genetics to improve their cattle breeding techniques.

The Kenyan Kids Foundation literacy program is in full swing. Thousands of used books were also shipped to Cherangany primary schools along with computers for high school students and McKay-Korir is busy initiating a reading buddy program. And the Transcend Running Academy is also off to a great start.

“In June, we had a group of high school runners from Louisville Christian Academy come to meet our Transcend Running students and run with them and visit their homes and schools,” McKay-Korir reveals. “It is important to me that people see our students for the potential they have and not just as poor Kenyan kids in a remote Kenyan village.

“During the month of August I had a full house. The Transcend students were on holiday from school so we hosted a two week training camp for the high school students and then the week prior to their camp we hosted a camp for potential future scholarship recipients in class 7/8.”

With all the charity work she does it is a wonder that McKay-Korir is able to train at the level she does. However, she has always made her visits home count. She has won prestigious Canada Running Series races such as the Harry’s Spring Run-Off 8k and the Toronto Yonge Street 10k.

“I never lack people to run with in Kenya,” she declares. “I have been doing a number

of workouts and long runs with a group of Kenyan women who also happen to be mothers. There are some Kenyan boys who stay with us also and I sometimes also run with Wesley.

“Many marathon runners run for a cause and it gives them extra strength to push through the pain. Using my marathon debut to raise funds for these athletes to get an education is something very important to me.

Among the group she meets up with a few times a week is Scotiabank Toronto Waterfront Marathon record holder Sharon Cherop and Mary Keitany, winner of the New York and London marathons.

On Friday October 16 McKay-Korir will appear at the Scotiabank Toronto Waterfront Marathon expo (6:00 p.m.) to talk about her charitable work, to introduce a special screening of ‘Transcend’ (6:30 p.m. – 7:45 p.m.) and then participate in a Q & A with runners.

Wesley Korir will run in the Chicago marathon the Sunday prior to Toronto and then fly up to support his wife. Along with the countless spectators lining the Toronto streets there are many young Kenyans who will also be waiting to see how their mentor performs in her marathon debut.