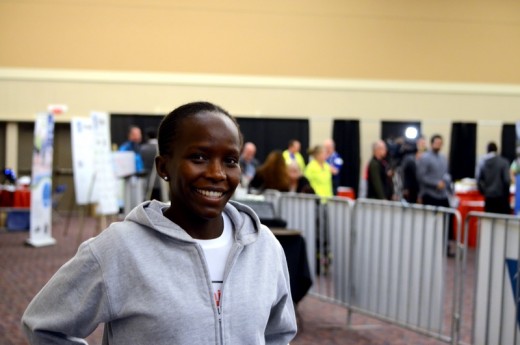 The 27th annual TC10K is set to take place Sunday, April 24th with an estimated field of 9,000 participants. Leading the field will be a handful of Kenyan athletes whose sole purpose will be to break the course record.

Fellow Kenyan Simon Chemwoiya set the event record in 1995, by finishing in the time of 28:47. The route was different in 1995, where the athletes started by running the route in reverse and easterly on Dallas Rd before turning around on Dallas near the Ross Bay Cemetery to make their way back with a diversion into Beacon Hill Park.

The best time on the current iteration of the event is 29:08, which was set by Vancouver’s Kelly Weibe in 2015.

Christopher Cheruiyot from Iten, Kenya, in his first foray to North America is perhaps the strongest athlete entered, he is coming off of a personal best Vancouver Sun Run performance of 29:03 for second place last Sunday.

The 24 year-old had good performances last year, for example he finished second at the Swansea 10K and second also at the Bristol Half Marathon in Great Britain, where he ran 29:10 and 61:42, respectively.

Paul Kimugul, who owns a more impressive 28:00 personal best time from a race in Italy, missed the race last year due to hamstring issues. He is now back and ready to race well. Last Sunday at the Sun Run he finished in the time of 29:17 for third place. He was running with tight muscles as he had run the Around the Bay 30K in Hamilton in freezing temperatures a few weeks prior. Kimugul expects to challenge for the win Sunday.

“I am ready to race well,” said the 36 year-old, who calls Eldorat home. “My legs are now recovered from the Around the Bay race and the Sun Run. I am feeling good and I will challenge for the win.”

Another athlete who didn’t run as well as expected during last Sunday’s Sun Run had finished second in the 2015 TC10K and third at the 2015 Vancouver Sun Run, arriving after 40 hours of travel at midnight, waking up at 5:00 AM to be ready to race on time. He set his personal best at last year’s Sun Run by finishing in the time of 29:05.

“I didn’t race well in Vancouver last week. I am fitter than that and I want to run a new personal best in Victoria,” said Kipkoech.

Other top athletes are Lamech Mokono from Nairobi who owns the GoodLife Fitness Victoria Marathon record of 2:13:42, which he set in 2013. Bernard Ngeno with a best of 30:05 and Daniel Kipkoeh who has run as fast as 28:47.

Jane Murage is back for the fourth consecutive time. She is the defending three-time champion. She  has run as fast as 32:47 and last year ran 33:07 at the TC10K, but this time she brought competition in Lenah Jerotich.

“I am feeling good and look to run better than I did in Vancouver,” said Murage.”

Lindsey Scherf is also back from last year. The Palo Alto native owns a best of 32:33  from 2014, which she achieved in Mobile, Alabama. She is a six time All-American from her time at Harvard University. Scherf finished fourth in 2015 in the time of 33:17. This year she ran the Vancouver Sun Run in 33:53 to finish fourth.

Eritrean-Canadian Lemlem Ogbasilassie has competed internationally for Canada in the 800-metre distance. She will toe the line along with Cold Lake, Alberta’s Emily Setlack. Setlack is a dark horse for this event, having run 34:02 during the Vancouver Sun Run for fifth place, but feels that she is faster at this time, hence her trying to race for the first time without the use of a watch.

“I am looking forward to going without the watch, I think I will race it better that way.”

Some of the top masters men who will be racing are Craig Odermatt, Bruce Deacon, Jason Loutitt and Jim Finlayson, all but Loutitt are from Victoria. Finlayson is coming off of a very strong race at the Vancouver Sun Run where he finished in the time of 31:12.

Lucy Smith of Victoria is the top master athlete. She is a 19-time Canadian champion at various events including track, road, cross-country racing as well as triathlon and is a two-time World Duathlon silver medallist. Smith is a six-time TC10K winner with a course best of 33:32.