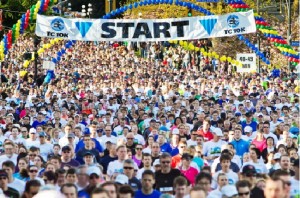 A strong field of elite athletes from the US, Canada and Kenya, will lead the 26th annual Times Colonist 10K (TC10K) race Sunday, April 26th. The race will include approximately 10,000 other runners and walkers who will follow a course around downtown Victoria, starting and finishing at the beautiful Inner Harbour and in front of the stately British Columbia Parliament Buildings and Empress Hotel.

The men’s winner will be a toss-up between Kenyans, Leonard Koech (Kipkoech) and Benard Ngeno and Vancouver-based runner Kelly Wiebe.

Kipkoech finished third at last Sunday’s Vancouver Sun Run. He raced just a handful of hours after arriving from over two and a half days of travel from Kenya. Regardless, he finished the race only 12 seconds behind winner Luke Puskedra from Oregon – an athlete with a 10,000m personal best of 27:56. Second in the race was Daniel Kipkoech (no relation). The three finished in 28:53, 28:58 and 29:05, respectively. Wiebe, one of Canada’s strongest distance runners will also toe-the-line. He is a previous winner of the Vancouver Sun Run and owns a 10K road personal best of 29:13. Although he did compete in the 2015 Sun Run, he had an off day for himself and finished fifth in the time of 30:01. He expects to race well at the TC10K.

For the women, Kenyan Jane Murage – a previous TC10K winner – who finished third in the Sun Run behind Natasha Wodak and fellow Kenyan Risper Gesabwa, will be a favourite. American Lindsey Scherf who finished fourth in the same event in the time of 33:30 will be toeing-the-line and the two will likely finish first and second. Scherf’s personal best time is 32:33 from March of 2014 in a race that took place in Mobile, Alabama. Murage’s road best over the distance in 32:34 – the two are obviously well matched. There was a 13-second difference between them during the Sun Run.

Vancouver’s Dayna Pidhoresky will be racing the TC10K. She is starting to run well again, after experiencing an extended period of injury. From 2010 to 2012, the 28-year-old ran a series of personal bests from 10K to the 30K distance including half-marathons as fast as 1:11:46 (Not an eligible performance due to the construction of the course having the start and finish too far apart – as ruled by Athletics Canada) and 1:13:15 as well as a road 10K best of 33:02. She has been very consistent in the 30K distance racing the Around the Bay 30K in Hamilton, Ontario three times all within one second of each other, 1:50:46, 150:47 and 1:50:48. Although the course length is in dispute for 2015, she had stomach troubles and battled a strong headwind over the final five kilometres. She should finish third based on the latest registration list available.

Lemlem Ogbasilassie (Bereket) is an 800-metre runner with a personal best that puts her near the top of Canadian middle-distance running, having run as fast as 2:00.82. She has competed internationally in the 800m as well as in cross-country. During the 2014 TC10K she finished in the time of 35:27.

Local master athlete Marilyn Arsenault owns two national 10,000m records one each for the 40-44 and 45-59 age-categories with a best of 34:22 (while a master). She is a previous GoodLife Fitness Victoria Half Marathon record holder. The masters division is bolstered by a very consistent Lucy Smith who has competed at a high level on the roads, track, trails, triathlon, ironman and duathlon for nearly 30 years. She is a 19-time Canadian Champion.

The men over 40 will be led by Kevin O’Connor of Vancouver and Jim Finlayson of Victoria. Not far behind will be Victorian Craig Odermatt, who recently outright won the Comox Valley Half Marathon in the time of 1:12:04. Both Odermatt and Finlayson have raced 10K within a minute of their lifetime personal bests for over twenty years. The finish order between these three should go Finlayson, O’Connor and then Odermatt. Kenyan Philip Samoie was born in 1975. If he is indeed 40-years-of-age, he will be a contender for the top-master position.

Kenyan, Dancan Kasia owns a personal best road time of 29:15. During the 2015 Vancouver Sun Run the 36-year-old finished in the time of 30:49. Fellow Kenyan Gilbert Kiptoo’s personal best time is 30:30 from 2003. Not much is known at press time about Benard Ngeno, however, he did run the 2015 Vancouver Sun Run finishing in the time of 30:05 for seventh place.

Daniel Kirwa owns a 10,000m personal best of 28:36 from 2008, which he ran during the Payton Jordan Invitational – a notoriously fast event. He has a more recent road best of 29:14, from 2012 from the Crescent City 10K in New Orleans. Kirwa is not afraid to mix it up in various distances. In 2015 he ran an 800m race in Nairobi, while he has also competed in the marathon distance. His strength appears to be in the 10K.

Although it has been several since we have seen Willy Kimosop at his best, he can still be a threat for a top-five finish. The Kenyan has run 10K on the road as fast as 29:04 at the Sun Run six years ago. Kimosop finished eighth at this year’s Sun Run in the time of 30:20.

Lamech Mosoto Mokono has run the marathon distance in the time of 2:13, twice, once in Victoria breaking the old record in the process during the 2013 edition of the race. His 10K best is of similar quality having run 29:44; however it has been seven years since he ran that well. A more recent time is a 30:44 10K from 2014. It is likely that he is faster than that; however it is debatable whether he can tussle with the likes of Kipkoech and Wiebe, who should go 1-2 as will Scherf and Murage in the women’s race. 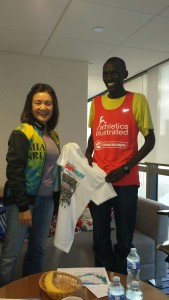