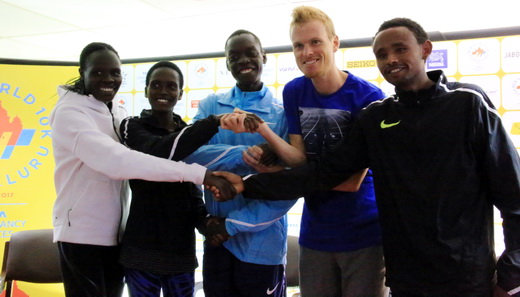 Firstly, he’ll be aiming for his third successive victory, an unprecedented feat as no other runner

– man or woman – has ever won in Bengaluru more than once since the race started in 2008.

Secondly, he’ll be aiming to get back to his thrilling form of 2012 when he twice went under 28

minutes for the distance, culminating in a personal best time of 27:36.

“I love this race and Bengaluru. I have run well here the past two years and there is always a

very strong field, and I like to push myself. I am now a confirmed road runner. I feel I have more

injuries when I am running on the track, and now a fast marathon is my target after making my

debut this year in China [when he finished second at the Xaimen Marathon in 2:10:20]” said

Geremew, who has some impressive credentials over shorter distances on the roads to his

Alongside him at the press conference on Thursday was the world record holder over 10km,

“It’s my first time in India and I am privileged to be here. My training has been going well again

now that my injuries are gone. I am ready to do my best,” commented Komon.

Like Komon, New Zealand’s Zane Robertson is racing in India for the first time.

Robertson ran his 10km best of 27:28 when winning in Berlin last October, which stood up as the

fastest time in the world in 2016, and he is aiming to be the first man from outside East Africa to

Nevertheless, Kenya has played a big part in Robertson’s elevation to being a world class

Now 27, Robertson expanded on his intriguing back story which has meant he has trained in

Kenya regularly since he was a teenager, including in recent months.

“In high school, my brother and I didn’t fit in with all the other kids and we joined running

“We met Kenyan runners and then asked if we could go to train there. They were extremely

welcoming, our parents thought we were a little crazy but they supported us. Initially it was

hard, we were only 17, but we are now top of the world and competing with the Africans.

“I don’t think Kenyans have a genetic advantage, it’s how you grow up. Our mother

encouraged us to eat right, a natural diet, and we ran to school, we had an active lifestyle

and ran cross country bare foot. It’s what you eat and how you train.”

In the sights of all the top men’s runners is the course record of 27:44, set by Kenya’s Geoffrey

the diminutive Kenyan will be having her first competition since that race in Bengaluru.

31:48 set by her compatriot Lucy Kabuu three years ago.

“I celebrated my gold medal with my family but now it is time to start competing again. My

aim this summer will be the 10,000m at the world championships in London,” commented the

She will be challenged by fellow Kenyan and 2012 winner Helah Kiprop. “This is actually my

sixth time in Bengaluru and I always enjoy the race even if I have not won since my first time. I

Celebrating the TCS World 10K having been run for a decade in the city, this year the runners

In addition to the TCS World 10K for elite runners, there is an Open 10K, the Majja Run (6km) the

Senior Citizens’ Race and Champions with Disability Race (both 4km).

Approximately 24,000 runners will take to the roads of Bengaluru for the five different races in

Asia’s leading run over distance in the last nine years.