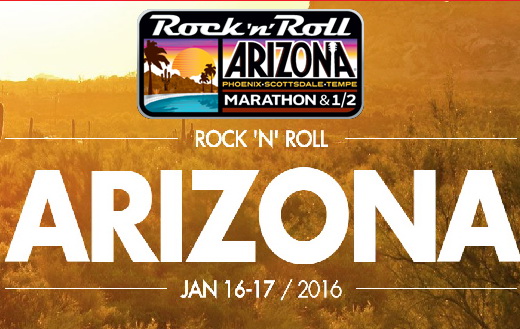 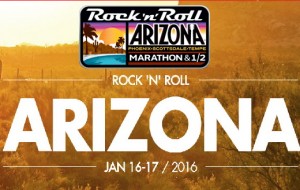 It’s been quite a weekend in the state of Arizona. On Saturday evening, the Cardinals defeated the Green Bay Packers in overtime to advance to the NFC Championships, and on Sunday, more than 20,000 runners turned out for the Rock ‘n’ Roll Arizona Marathon & ½ Marathon in Tempe, Scottsdale, and Phoenix. One of those runners, Noah Droddy of Indianapolis, Indiana found yet another reason to celebrate the weekend: He qualified there for the U.S. Olympic Marathon Trials next month in Los Angeles, clocking one hour, four minutes, and 18 seconds in the half marathon. “I worked really hard for this,” Droddy said. “I went from 1:08 to 1:04 in a year. It’s good. It’s the last day to qualify, and I’ve always been known as a procrastinator.” An emotional Droddy said he’s now going to gear up for the big race in L.A. next month. “The next 30 days are all cake, baby,” he said. “I’ve never run a marathon before, so we will give it a go.”

Scott Bauhs won the men’s half marathon race and set a course record with a blazing 1:02:23 finish. “You can’t ask for better weather,” Bauhs recalled. The 29-year-old champion put in his finishing kick after the 10-mile mark. “I was really getting antsy at the point,” he said. “It opened up at the downhill and I felt in control the whole way. I’m happy to be this fit.” Second and third place went to Ben Bruce (1:02:28) and Karim El Mabchour (1:02:33) respectively.

Kenyan-born U.S. citizen Janet Cherobon-Bawcom was the first female in the women’s half-marathon in 1:11:49. “It was kind of a workout, and it went well into 11 miles. I was supposed to run faster in the last 2 miles, but it didn’t work out so well,” said the 37-year-old Cherobon-Bawcom afterwards. “I was probably 25 seconds off that I wanted to run today.”  Cherobon-Bawcom, who lives and trains in Flagstaff, Arizona, had already qualified for the U.S. Olympic Trials Marathon last month in Houston. She admitted that today’s race was more of a fitness test for her. Cherobon-Bawcom said the temperatures on Sunday were perfect and the course was fantastic. “There is just one hill and if you can get some momentum and get in the zone, you can roll through it. Everyone was so supportive for sure along the course. It really helped.” For Cherobon-Bawcom, the hard work doesn’t stop after today’s race. She says she will be continuing with 100-mile weeks and expects to complete three more workouts before the Trials next month. “

Tommy Rivers Puzey, wearing bib number 8, won the men’s marathon in 2:25:22. The Flagstaff resident defeated reigning champion Roosevelt Cook in the final miles. “It was really great to come down out of the mountains with my wife and two kids and have some fun here,” he said. “I just focused mile after mile after mile. I wanted to have a solid 20 miles and so today was a step in the right direction.”

The women’s marathon title went to Tanaya Gallagher who broke the finish-line tape in 2:46:44, Fifty-five seconds later, McKale Davis came through for second (2:47:40). The final podium spot was awarded to Natalie Como (2:50:18).

Runners on Sunday weren’t just competing for personal glory. Kate Van Buskirk, once a Duke University track and field athlete, and Canadian Olympic hopeful ran the half marathon in memory of former Duke teammate Sally Meyerhoff, who won the race back in 2011 and passed away that year. “She touched so many lives,” Van Buskirk said. “We wanted to come out here to represent her, represent Duke, and represent the great state of Arizona. “I thought about Sally every single minute of the race. A ton of people saw me out there and told me to smash the race for her. ” Sunday’s race was her first Rock ‘n’ Roll experience. “It was my first and will definitely not be my last,” she said. “It was fabulous. I enjoyed every minute of it. The bands were awesome and the course was fantastic.

Elites aside, runners from all 50 states and 17 countries around the world took part in this weekend’s races, which along with the half marathon and marathon, included a 10K and a 5K throughout Scottsdale, Tempe, and Phoenix. True to the Rock ‘n’ Roll spirit, alternative rock band Better than Ezra jammed at the finish-line festival for participants and their families.

The 13th annual Rock ‘n’ Roll Arizona Marathon & ½ Marathon will take place the weekend of January 16 – 17, 2016. The fast and scenic courses will give runners a first class tour of the desert cities of Phoenix, Scottsdale and Tempe. Runners can rock to the sounds of live, local bands, along with enthusiastic cheerleaders to keep participants moving. The event concludes with a post-race concert and finish line festival. A two-day Health & Fitness Expo presented by FOX 10 and My 45 kicks off race weekend at the Phoenix Convention Center on Friday, January 15 and Saturday, January 16. The Expo will have numerous vendors featuring the latest in running gear, nutrition and training tips. To register for the race or for more information, visit RunRocknRoll.com/Arizona or follow us on Twitter @RunRocknRoll.