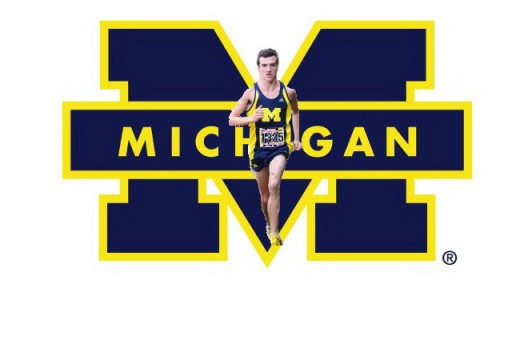 Ben Flanagan of Kitchener, Ontario is a freshman with the University of Michigan Wolverines. He was an All-Big Ten second team member this year and was a member of the NCAA Great Lakes Regional Championship team. He also competed in the 2013 Canadian Cross Country Championships as a junior and finished second to Justyn Knight.

Christopher Kelsall: You finished second at the 2013 Canadian Cross Country Championships. What were your expectations going in?

Ben Flanagan: My main goal was to finish in a position that would qualify me for the NACAC championships. From then on, I wanted to do whatever I could to finish as high as possible. Canadian nationals is always a competitive meet, so I knew there would be plenty of talented athletes there like there were. With that in mind, the objective was to position myself in the lead group with 2K to go and then make decisions accordingly from that point on.

CK: Were you surprised by how well Justyn Knight ran?

BF: Not at all. Over the course of the year, he’s progressively shown his capability and consistency and I knew going into nationals that we would certainly be a contender for the win.

CK: Did the wet conditions suit you?

BF: In all honesty, I would have preferred the conditions to be clear, but I don’t think the wet conditions hindered me in any way. Since it’s cross-country, you can’t go into any race depending on specific conditions, and considering the past few years that nationals have been hosted in Vancouver, I figured the course would be a little sloppy.

CK: You seem to compete well over a range of distances from 1500 to 10,000-metres, is this by design, being a freshman, to see where your strengths lie?

BF: I appreciate that very much. I wouldn’t say that running the variety of distances was intentionally set up in a way to find my strengths, but rather, it was out of personal preference. I ran both the 1,500m and 3000m in high school track to make myself as competitive as possible at big meets (like OFSAA), and in cross-country, you’ve got to just take on the distance that you’re handed. However, there’s no doubt that over the course of running this variety of events, I have found certain personal strengths and weaknesses as a runner.

CK: Which are your preferred distances?

BF: I really love each distance from the 1500m to the 10K for different reasons, but I tend to personally get stronger as the distance lengthens. That being said, although I’ve never run the 5000m or 10,000m on the track, I have a feeling those are the distances I will specialize in, in college.

CK: There seems to be a lot of actors and writers that come out of Kitchener, like Kwesi Ameyaw from Man of Steel and Harry S. Franklin who wrote The Brave One. Would you refer to Kitchener as culturally-inclined?

BF: I would definitely classify Kitchener as a cultural city. More so, the entire Waterloo region is extremely cultural. The region does a tremendous job encouraging and supporting the growth of local community members. Whether one is involved in sports, writing, the arts, or any other affiliation, the Waterloo region has a copious amount of programs and organisations that provide the necessary essentials for community members to excel, and the community to excel as a whole.

CK: Do you have a penchant for an art form such as performance, dramatic, creative or fine art?

BF: My sisters and a lot of my extended family were, or still are, affiliated with the performing arts, so I grew up surrounded by the arts. I enjoyed watching them perform, and supported it very much, but personally never had an ounce of artistic talent in my body.

CK: A few hockey legends come from there as well, like Darryl Sittler, Doug Risebrough, and Howie Meeker. Are you a Maple Leafs fan?

BF: I always have been, and I always will be! My favourite player growing up was Mats Sundin.

CK: What subjects are you taking in University?

BF: I’m majoring in Movement Science while pursuing pre-med. My current semester consists of calculus, psychology, and a couple of biology courses.

CK: What level of weekly training volume are you up to this year?

BF: This week I’ll be completing just over 136-kilometres (85miles). The plan is to get up to about 152km (95miles) this winter. It’s certainly higher mileage than what I ran in high school, but the transition has been gradual so it’s been a pretty smooth adjustment.

CK: What are your goals for the 2014 outdoor track season?

BF: I have not yet thought too much ahead towards outdoors yet. As for now, the main goals are to stay healthy, hopefully, run some PBs. If the opportunity arises, I would love to represent Canada at the World Junior Championships in Eugene, Oregon.