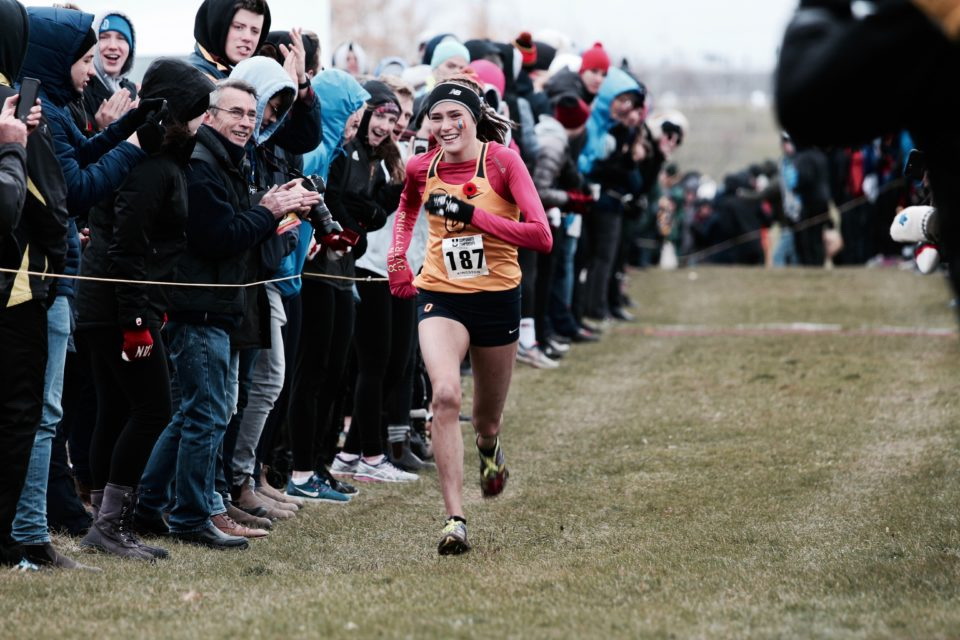 She (that we know of at the time of this writing) is one of only two athletes to win the event at 17-years-of-age (CIAU, CIS, U Sport). The other one was Paul McCloy of St. John’s, Newfoundland, who went on to win the national club championships six consecutive times – a record until Regina’s Simon Bairu broke it. McCloy also competed in the 1988 Seoul, Olympics in the 10,000-metre event.

At U Sport, the race weather was characterized as cold and windy, apparently suitable for MacDougall who grew up in the area.

MacDougall’s sister Branna is also on the team and finished second in 2017 in Victoria, BC and top-10 in Kingston, after coming back from injury.

The MacDougalls attend Queens University while running for Physi-KULT Running under the direction of Steve Boyd.

Christopher Kelsall: Congratulations on your U Sport Cross Country Championships win. What were your expectations going into the race?

Brogan MacDougall: The days before the race, I did my best to ignore any external expectations or pressure. I mainly just wanted to race to the best of my ability and to help maximize the team’s position. I tried to keep in mind that so close to the race there is nothing more you can do fitness-wise and there was no point in getting nervous or placing too much pressure on achieving a certain place.

CK: Before you won nationals (CIAU, CIS, U Sport) apparently the only 17-year-old to win was Paul McCloy who had a strong international career. Did you know that going in and did that provide additional motivation?

BG: I did not know that there was only one other 17-year-old who had won. I tried not to think too much about winning before-hand, mostly just about what I could do that would allow me to run my best race on the day.

CK: How does a second-place team finish stack up in your books? You were close to the win. Are you happy with the result?

BG: After two years of coming second as a team, I know we really wanted to get that top position. It’s tough being so close, but as a team, I think we can be proud of what we accomplished. Laval has an amazing group of girls who raced incredibly well and there is no shame in losing to such high-level runners. I know everyone on the team learned a lot from that race and this entire season. We can’t change what happened now, but we can take what we’ve learned and get ready for next year’s race.

CK: It was cold and windy, but you looked relaxed entering the finish chute. Does that type of weather work for you?

BG: I really like when conditions are less than ideal. I think it makes the race more interesting and less predictable. The Boston marathon this year was a perfect example of this: people who on paper shouldn’t have been winning were able to thrive in poor conditions. For our race, you had to be mentally tough for the entire race or the conditions would quickly take their toll on you.

CK: Branna came back to U Sport after a year in the NCAA. How good is it to have your sister on the team? Do you do most of your training together?

BG: It’s really great having Branna as our captain. She truly cares about each individual and would do anything for the girls on the team. We live in an apartment together and she keeps me in line for sure. She was unfortunately injured for the majority of the season so we didn’t get to do as much training together as usual, but when she is in peak form she is an amazing person to train with.

CK: For your first U Sport outdoor track season, what distances do you hope to specialize in? Or do you want to run the gamut from 800m to 5,000m?

BG: I still have to iron out the details of the track season with Steve. I’ve heard talk about going back down to the 1500m, which I am slightly wary about, but after missing the entire 2018 track season, I’ll be thankful to do any distance as long as it means I can get back out there!

CK: Why did you miss last year’s track season, injury?

BG: Yes, I was initially injured with a stress fracture in April that arose through a combination of overtraining and under-fuelling. I then didn’t take enough time off and got another stress fracture in May. As much as it hurt to miss what should have been my most important track season to date, it served as a major wake-up call for me and led me to make major changes in my life. Under Steve’s advisement, I took the entire month of June off of all exercise which allowed me to reset mentally and get strong enough to tackle the cross season.

CK: Good advice. Did you keep up the quality with the increase of volume?

BG: Steve added more mileage to the plan in March, but with the assumption that I would run it very easy until my body adjusted to the increase. I didn’t realize how much of a stress it would put on my body to increase my mileage, but not slow down the pace. In addition, I also did a lot of it on the pavement and that pounding eventually took its toll. This season, we switched out some running for cross-training on the elliptical and I’ve slowed down my easy days a lot which has actually increased the quality of my workouts as I’m not fatigued from the mileage all the time.

CK: I assume that you had home course advantage at Fort Henry Park, having grown up in Kingston. How well do you know the park and the route?

BG: I’ve competed on Fort Henry since the elementary meets in Grade 3. Later in the season, the team usually does one workout a week there and, as it is the closest soft-surface to where I live, I do a lot of easy runs up there too, all that to say, I know the course very well.

CK: Do you feel that having home course advantage allowed you to dictate when to surge and when to drop the field; control the race?

BG: For Junior Nationals in 2017, I really took advantage of knowing the course and where to surge as that was more tactical for me.  I wouldn’t say there were particular places I surged for this race, but because I knew the course so well I knew where not to let the pace slow and I think bit by bit that consistent speed wore away at the pack.

CK: At club nationals, will you be racing juniors again or will you move up to the senior race?

BG: I’m racing junior for one more year so that’ll be nice for the last nationals on our home course.

CK: You just finished midterms. How is the engineering program?

BG: I’m finding it tough: we have six courses this semester which makes a heavy workload. I  found during the busier weeks that we had midterms I didn’t have a lot of time to do the extra things that come along with running such as rolling, strength training. Also, I’ve had to learn how to function on less than eight hours of sleep per night, but overall I love how challenging it is and I find most of our courses very interesting.

CK: Are you working out assignments in your head when you are out for easy runs?

BG: I like to keep easy runs separate from school. It’s my time to leave all the stress and work and just enjoy the fresh air and sights around me.

CK: What other sports did you play growing up? When did you discover running?

BG: I swam a little for a few years, but was not good at all. I also did triathlons for a while and a bit of soccer. I think what originally sparked my competitiveness was competing in games with my siblings as kids, but after my sister began running in Grade 8, that’s when my eyes were really opened to the running world. I didn’t start training with Steve until the end of Grade 8.

CK: What are your short-term goals, for indoors and outdoors 2019?

BG: I don’t generally do a lot of indoor meets, usually just one or two to get a general idea of what my fitness is like so I don’t think I have any goals for indoors. For outdoors, after missing all of track season this year, I’ll be grateful just getting back on the track and competing.

CK: What was the nature of your injury?

BG: One stress fracture in my first metatarsal and a second one in my fifth metatarsal.

CK: What are your long-term goals, anything audacious?

BG: I never like getting too far ahead of myself. While making plans for the future is important, being satisfied in the present moment and enjoying the process is key to longevity, which is what I’m aiming for in this sport.