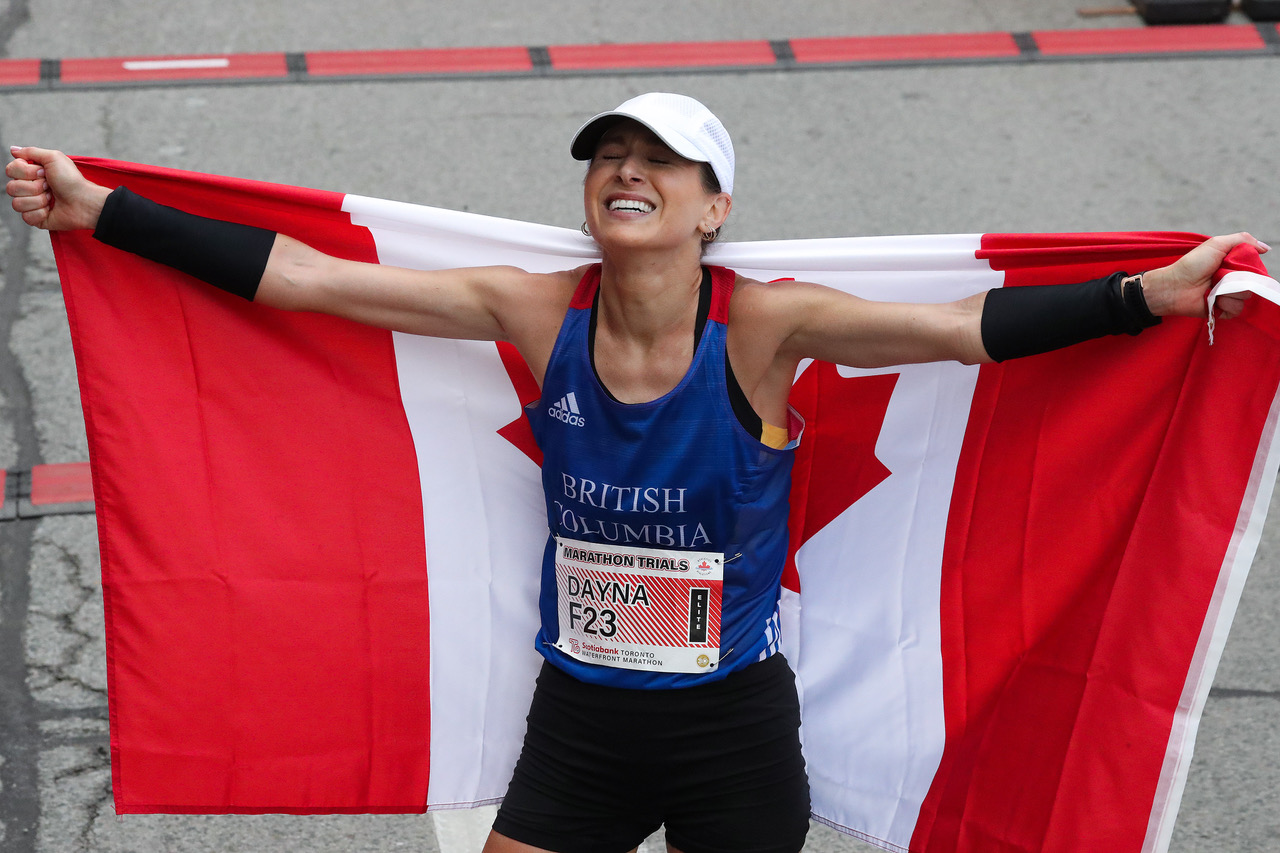 The Canadian women’s marathon record may come down this fall as at least four of the nation’s top athletes are competing over the next four weeks. The quartet will be racing in the Berlin and Toronto marathons, respectively.

Malindi Elmore holds the current record with her 2:24:50 from Houston in January 2020. Natasha Wodak has run as fast as 2:26:19 during the one-off Marathon Project in Chandler, AZ, in Dec. 2020. They are the two fastest Canadians all-time.

Elmore will be running the Toronto Waterfront Marathon on Oct. 16. The Kelowna native took ninth place at the Tokyo Olympic marathon in 2021 in Sapporo, just 3:39 outside of the gold medal position taken by Kenyan Peres Jepchirchir. She is the world record holder in the half-marathon in a women’s-only race.

“I am excited to run the Toronto Marathon as it has been on my bucket list since I retired from track 10 years ago. In fact, I had hoped to do it in the fall of 2012 following my track season but wasn’t ready for the training at that point. It will be a great opportunity to get into a good fast race again and hopefully feel strong and controlled. I don’t have any time goals in mind yet but obviously, hope to run fast,” shared Elmore.

For the Canadian title in Toronto (separate from the overall win, which of course is also at stake), Elmore will be up against Vancouver’s Dayna Pidhoresky, the defending champion and fellow Tokyo Olympian. Also competing is Leslie Sexton who raced in this summer’s Eugene World Athletics Championships marathon.

Pidhoresky has run as fast as 2:29.03 in Toronto in 2019, while Sexton has gone 2:28:35 during the 2021 Philadelphia Marathon. Sexton nearly equalled her best at Eugene with her finish time of 2:28:52. Incidentally, both athletes are 35 years of age and both live in Vancouver.

“I was really, really happy with how the (Eugene) race went,” she remembers. “I think my fitness was really good going in. I was definitely in the best shape of my life and had great preparation both with workouts and details like pacing but, in the marathon, you never know. I thought that on a good day a top 20 finish was possible,” she said in a press statement.

“[My] Fitness is really good and I have confidence that I’m the strongest and fastest I’ve ever been going into a marathon,’ shared Pidhoresky. “The title is not on my mind at all, although it would be great to nab that again in Toronto, my eyes are fully fixed on running as fast as I can.”

Wodak, the former national 10,000m, and half-marathon record holder is targeting the marathon record. Currently, the difference is just 1:29 between Elmore and Wodak’s best times. Both the Toronto and Berlin courses are fast, and both offer world-class fields to work with. So the result may just come down to the weather or a bit of luck. Either way, expect both to challenge the 2:24:50 mark.

“My summer of training has gone well here in Vancouver with good weather. Although there have been some hot days. I was also able to get over to Victoria to get in some key sessions with coach Trent (Stellingwerff).”

“We started this build already in good shape and with mileage decently high. So we were able to push things a little more — higher weekly mileage and bigger marathon sessions,” added Wodak.

Currently topping the Berlin elite list is American Keira D’Amato with her national record of 2:19:12. Kenyan Nancy Jelagat Meto is ranked second entering the race with her best of 2:19:31. Interestingly, the 38-year-old ran four new personal bests during 2021. The third-seeded athlete is Ethiopian Guteni Shone Imana with her best of 2:20:11.

The race is happening Sunday, September 25.

The Toronto Marathon happening Sunday, October 16, features Magdalyne Masai who has not run a marathon in three years, but that doesn’t bother her. She is the defending champion and set a Canadian all-comers record of 2:22:16 in 2019, which is the 26-year-old Kenyan’s personal best.

As the saying goes, only time will tell.

Details about the Toronto Waterfront Marathon are available here>>