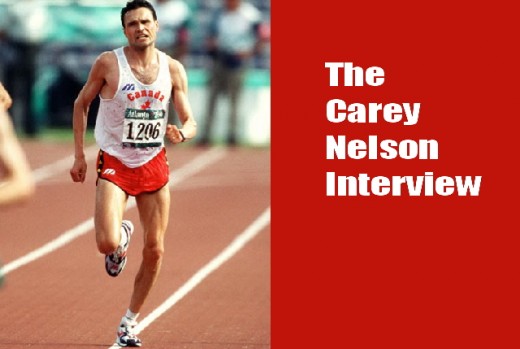 Carey Nelson is a Canadian long-distance runner who raced internationally during the 1980s and 1990s. He competed in the 1996 Atlanta 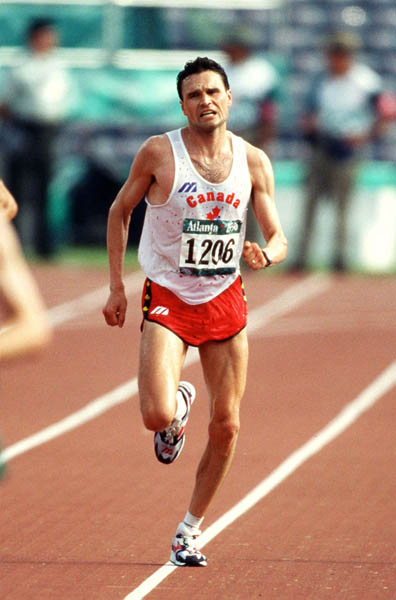 Olympics and 1994 Victoria Commonwealth Games in the marathon distance. He was competitive from 5000-metres to the marathon and in cross-country. Nelson competed in seven IAAF World Championships, including four times in world cross-country.

During the Victoria Commonwealth Games, he finished less than two minutes from a silver medal, to finish seventh. Australia’s Steve Moneghetti won the race in 2:11:49.

The Vancouver resident by way of Saskatoon, Saskatchewan continues to run and coach into his fifties.

Christopher Kelsall: Can you take me through your Atlanta Olympics Marathon experience?

Carey Nelson: I started running in 1978. My first coach Don Gillman told our running group at the Riversdale Track Club in Saskatoon the story about Abebe Bikila and how he won the 1960 Olympic Marathon running in his bare feet. That day I decided I wanted to race in the Olympic Marathon. It kept me motivated when it was 30 below and we were out on a 15-mile run.

We had a good team at the 1996 Olympics that year with Peter Fonseca, Bruce Deacon and myself. It was a warm and humid day but we knew it would be as it was August in Atlanta, Georgia. I trained in Vancouver that summer wearing a fleece sweat top to get ready. I was excited to be there as I had said; I had wanted to race the Olympic Marathon since I was 14. I was conservative with my pace as I had to drop out of a couple of marathons earlier in the year due to knee pain, so I ran an even-paced race and finished 35th in 2:19. I was ranked 96th going into the race and was happy with my results. It was the grande finally for me and I was grateful to be there and enjoyed every step of it.

Now I coach the Forerunners running clinics in Vancouver for all levels of runners. We have many first time marathoners, age-group champions and Boston qualifiers. It’s a lot of fun. A group of us will be going to the Athens Marathon to race Nov 10. It’s the original-original. Starting in the town of Marathon and finishing in the 1896 Olympic Stadium in Athens. It’s the same course as the 2004 Olympics. After that I will race the 2014 Boston Marathon as a charity fundraiser; the two iconic marathons in one year.

CK: Do you tell the story of Abebe Bikila to the clinic participants?

CN: I do occasionally at a seminar because it’s such an inspiring story. You can win even if you can’t afford shoes. Running’s biggest cost is determination and personal sacrifice. You have to put a lot of time into the training. If you love to do something it’s a lot easier to succeed.

CK: A good example of that was demonstrated at the 2013 Scotiabank Toronto Waterfront Marathon where several Canadian women ran very well, including taking down the national record by Lanni Marchant.

CN: It’s so exciting to see the top Canadian marathoners race so fast. Congratulations to Eric Gillis the top Canadian. I’ve seen Lanni Marchant’s times progress steadily which shows her dedication and hard work. Racing 2:27 is an amazing achievement in itself in addition to the Canadian record she set. It’s impressive to see Rob Watson and Natasha Wodak running personal best times of 2:13 and 2:35. Both are living in Vancouver. Dylan Wykes is also living near Forerunners training for his next race, along with Kelly Wiebe who ran the half in 1:04:57 in Victoria this year.

CK: You were pretty fast through the distances. Which distance do you feel was your strongest?

I was going to quit competition in 1990 and decided to run the Toronto Marathon six weeks before the race and won to my surprise in 2:15. I ran the Houston Marathon in January 1991 and won in 2:12 which is my best time. Shortly after that, I tore the meniscus in my left knee which ended my ability to train properly. I ran my PB in the 10,000m in June but my knee almost gave out a couple of times during the race.  I had a knee operation in 1992 and missed the Barcelona Olympics. In the back of my mind, I still wanted to run in the Olympic Marathon. I was able to run with mild pain. I managed to qualify for the 1994 Commonwealth Marathon in Victoria and 1996 Olympic Marathon by running a 2:15 in Houston. I decided to stop racing in 1997.

CK: What did your typical training week look like?

CK: Was there an athlete or coach that you followed the method of?

CN: I had some great coaches and learned a lot from all of them Doug Clement, Brian Clark, Kirby Baynton and David Baxter. I also learned from other athletes in the Kajaks club like Lynn Kanuka, Graeme Fell, Peter Butler, Art Boileau, Simon Hoogerwerf, Sue Lee and Paul Williams. I enjoyed reading about Dave Moorcroft’s training when he broke the 5000m world record. I had a chance to stay at John Walker’s farm in New Zealand and run with him. I also had a chance to run with Steve Ovett in 1986 and was inspired by his strong attitude. I did read a lot about training to try to get faster, but there is a point where you are over analysing and you just need to get out there and run.

CK: Steve Moneghetti won in 2:11; you finished top-ten with Bruce Deacon and within two minutes of a silver medal. Did you realise at the time what position you were in over the final kilometres?

CN: Yes I knew I was back in 7th, but I wasn’t able to make up the distance. I think if I could have run with a fully healthy knee I might have been up there. It is what it is and I am grateful to have run in the race.

CK: How are your knees these days? For an over-50 runner, you did fairly well to finish in 1:19:51 at the GoodLife Fitness Victoria Half Marathon.

CN: I enjoy the local masters races. There are some fast masters here, Kevin O’Connor and Mark Bennett. I run three times per week. One tempo run, one-speed workout and one long run. It’s the same formula I use when I coach at Forerunners and we’ve had great results and many Boston qualifiers. It’s a pretty healthy formula for your joints as well. Running three times per week reduces the risk of injury. My knee works pretty good now and running in minimal shoes seems to have helped a lot. I still need to ice it if I go over 25km in a run or run more than 50km in a week. I also just like to see others achieve their goals.

CK: Can you re-hash the story – your motivation – for running the excellent 22:58 8k road race back in the 1980s? You were racing primarily Dave Campbell at the time, yes?

CN: Dave and I trained at UVIC that year and we pushed ourselves on tempo runs. He was a great training partner and always likes to run fast. We often ran four or five-mile runs under 5 minute per mile pace starting from the UVIC Campus. Dave had great endurance and speed; he won a bronze medal in the 1986 Commonwealth Games and won the Sun Run as well. Our speed workouts often included sets of 400s under 60 seconds but he was always faster than me. When I ran with Dave it wasn’t going to be at an easy pace.

The day of the 1985 Pioneer 8km Dave was close behind me in pursuit all the way. I had to run to my limit to stay ahead of him. We both liked the same girl and I wanted to finish ahead of him. The course was perfect and fast. I ended up running 22:58 and Dave was just behind. Dave won the Sun Run ahead of me a couple years later so it all evened out in time.

CK: Did the good guy get the girl?