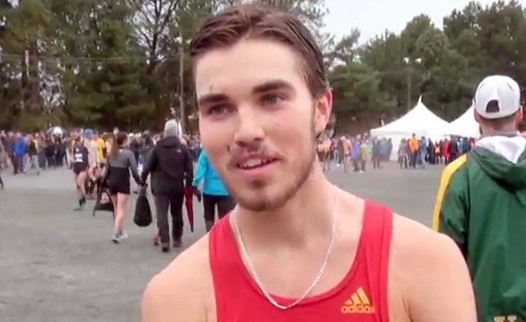 Connor Black of Forest, Ontario is in his fourth year at the University of Guelph.

The former hockey player, who had run most of his life, converted to full-time running during high school. The decision has paid off as he has competed at a high level, including nearly winning the U Sport 3,000m indoor championships in March, but didn’t due to a lap-counting debacle.

On Nov. 12, he finished second to Yves Sikubwabo of Laval at the U Sport cross-country championships in Victoria on Nov. 12 this year, helping his Gryphons team to a first-place finish, after finishing an uncharacteristic ninth in 2016.

He has another year remaining on his eligibility and should only get stronger.

Christopher Kelsall: At the 2017 U Sport Cross Country Championships in Victoria’s Beacon Hill Park, the first four laps were crowded up front, but the final lap was down to you and eventual winner Yves Sikubwabo of Laval. During that final lap, did you believe you could win it or could you tell Sikubwabo had one more gear?

Connor Black: I thought I could win it, but I knew I would need to take him deep enough that he would fold before the last ~400m of the race. He has good leg-speed, which is why I got the pace going with 2K to go.

CK: Yes, coming through the finish area to start lap five, you were pulling him along. At what point did you realize that it was likely over?

CB: Truthfully, it wasn’t until the finishing chute that I knew he had me. I held the gap he put on me pretty well and as we came around the back-stop of the baseball diamond, I told myself I’d give one last big push as I thought the chance to catch him was still alive.

CB: Yes. I wanted to win and planned on it all season, but I put myself in the best position to try to break him and went deep in the process. I am very happy with my efforts.

CK: The University of Guelph has a history of winning, a lot. How gratifying was it to come back this year and win the cross-country championships as a team, after finishing a disappointing ninth last year?

CB: It was pretty special. Every guy on our squad bought into the system since day one and we invested our emotions every single day to that goal of getting back atop the podium. Very proud of what we built this season.

CK: When you say “system” are you talking about the training protocol and racing tactics?

CB: I’m talking about staying focussed and paying attention to detail. The really good teams do everything right, optimal training load, staying on top of sleep, eating well, and building team dynamic. The emotion we invested into one another is what separates us from other teams.

CK: What sports did you play growing up?

CB: I played AAA hockey out of Sarnia Lambton for six years. It was very competitive and I invested the same efforts I do today in running, into hockey at that time in my life.

CK: So where you looking at Junior B or Junior A as the next step? And making the decision between running and hockey?

CB: Absolutely. I wanted to go all the way with hockey. Running was almost entirely out of the picture during my first couple of years of high-school, but stayed with it because it felt like an outlet from hockey.

CK: So why the decision to go to running in the end?

CB: Ultimately, I wasn’t the calibre of hockey player cut out to make it at the highest level. I showed glimmers of hope with running and wanted to pursue it to see how far I could go. The challenge sport can introduce in your life is captivating, so why not continue it with running?

CK: Was that a rough moment to finally admit that you knew you were just not going to cut it?

CB: Very tough. Before this realization I didn’t have any plans to actually explore my possibilities with running, so, for a bit I felt empty without an athletic drive.

CK: Was there a moment, where you lost it, went into your room and ripped Sidney Crosby posters off the wall and threw trophies around?

CB: Funny you say this because Sidney is still plastered all over my walls in my bedroom at my parent’s house! No, I did not, but I definitely went through a phase of accepting these facts.

CK: Ha-ha, it seems that the NHL – therefore every level below that – has begun to make room for smaller players again, after the giant-drafting methods of the late 1980s to early 2000s. Did size have much to do with it, being just 5’9”?

CB: A bit, but I was feisty. I loved to get my nose dirty. I would get rocked but I could hold my own, and I was a great skater so could stay out of trouble when needed.

CK: Yves wouldn’t know what to do if you pulled his singlet over his head and start pounding him; missed opportunity. Position?

CB: Yves is too nice of a guy to pull that stunt. Maybe just a tap in the back of the ankles to let him know I’m there! Third-line grinding centre. I was also a regular on the penalty kill.

Third-line centre, hence the strong aerobic capacity. How did you get into running to begin with, being an all-consumed hockey player wanting to go all the way?

CB: I ran cross-country in public school and was one of the stronger kids in the county. High-school rolled around and it seemed almost necessary to just stick with it and test the waters. I ended up missing out on OFSAA cross-country in Grade 9, which lit a fire in my soul to put a better effort into running.

CK: In March, you ran the U Sport indoor championships 3,000m race. You had the win, but then, the officials made a lap-counting error and you had another 200m lap to go. This apparently threw you off and instead of winning as you thought you had at 2800m, you finished fourth.

Do you still feel the sting from that event? Or are you fully over it?

CB: I am fully over it. The win would have been very special, but to finally see myself race with the tenacity it takes to compete for the win at the national level was what made the race as memorable as it needed to be.

CK: Regarding training, what sort of weekly training volume to you put in? Do you have a favourite workout?

CB: This fall I was consistently putting in ~120-125 km weeks. I enjoy lengthy sessions upwards of 30-35 minutes of work. One of my favourites is a classic 10K progression tempo.

CK: What about long runs? Do you enjoy a long meander in the woods or perhaps long, rolling road run?

CB: Long runs are actually my favourite run of the week! A typical long-run for me is in the 100-105 minute ball-park. I prefer a long, rolling road that will take me as far as I please. This scenery reminds me of my home-flats back in Lambton County.

CK: This is your fourth of five years as a Gryphon. So far, what can you take away from your time at Guelph?

CB: Yes, this is my fourth year as a Gryphon, and I will be returning for a fifth year. I will take too much away from my experience as a Gryphon but to highlight a few: you must be patient in this sport, and in doing so, enjoy the process! That means taking time to soak in small successes, enjoying team functions and the company of your best pals, and taking it seriously but not to the point of obsession. The last point is still one I work on every day.

CK: What is next for you?

CB: Time off! I’ll look to hang out with my boys, stay up past my regular 10:15 pm bedtime, and mix in one or two craft brews. I look to be as spontaneous and adventure-seeking as I can during downtime, as I tend to be really regimented in-season. Post-downtime it’ll be back in the saddle getting ready for a big indoor season with the Gryphs!