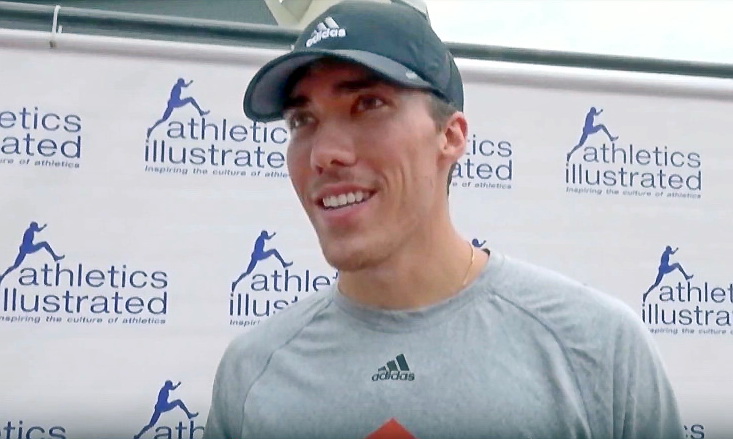 Corey Bellemore of Windsor, Ontario, is well known for his ability to run the beer mile, having taken the world record with his seemingly unreachable performance of 4:33.60 in 2017. On Aug. 11 this year, in Vancouver, he bettered that performance with a 4:24.44 finish time; however, the result was disqualified due to too much beer remaining.

The 23-year-old’s beer mile performances are impressive, but he is also working on a track career.

Bellemore is a middle-distance athlete specializing primarily in the 1500-metre distance; however, his 800-metre performances are strong too. After a fall 2018 cross-country season, he will work on the two distances continuing to focus primarily on the 1500-metres. Who knows, if he runs well in the 800-metre event, he may decide to focus on it as he looks for IAAF World Track and Field and 2020 Olympic Standards.

Christopher Kelsall: Obviously, you are well-known for your incredible ability to race the beer mile, but you have a serious career that you are working on as well. Are you going to stick with the 1500-metre distance for 2019?

Corey Bellemore: I think I’ll stick with the 1500m for 2019 but I am toying with the idea of throwing a few more 800m races in there. My races this year displayed a small improvement and progression from last year but my training saw some pretty solid gains. My speed was really coming around after nationals and I think if we approach things the right way I could run some pretty solid 800m’s in the near future. I really trust my coach Dennis Fairall and the plan we have set up.

CK: How can you not trust the coach of Melissa Bishop?

CB: Dennis was a huge reason why I chose the University of Windsor. Seeing the success of past Lancers and most notably, Melissa gave me so much trust and assurance in his program. He is the most selfless guy I know and is the reason I continue to progress but more importantly, enjoy the sport. Dennis and his amazing wife, Janet, have been my second parents and its fun to workout alongside their company.

CK: Does Dennis cringe at the notion of you racing a beer mile?

CB: At first I am almost positive Dennis shook his head at the notion of the beer mile. I believe it was because of two reasons:

1) He was in disbelief of the time.

2) He wants me to focus on improving in track and field and tapping into my potential.

Although my original intention was just to try beating a record and be done with it, a lot has come from it that has only helped me. We both see the positives from it and agree that as long as it does not interfere with my track and that I do not “train” for it (aside from the running portion) then it is fine.

CK: How would you assess your five-year career as a Windsor Lancer?

CB: My five years as a Lancer was awesome. It was the best decision for me in terms of academics, athletics and for me overall, as a young adult. First and foremost, I had some great coaches in Gary Malloy and Dennis Fairall. Obviously, they helped shape me as an athlete but in my transition into university academics, they were there to make sure I had all the resources available for any issues I was facing. I was able to train alongside many friends who always kept things honest. I was lucky to only get injured in early university which taught me some invaluable things about adapting to certain situations and being as progressive as I could. I still have a long way to go and so much learning about the sport to do but I matured a lot from my time at Windsor thanks to the people involved in the program.

CK: Did you play other sports growing up in Tecumseh?

CB: Recreationally, I played a lot of different sports in the neighbourhood or with my twin brother. We played street hockey, skateboarded, volleyball, lots of basketball, occasional road races, did swimming lessons, biked quite often and played some soccer. Competitively, I didn’t play many sports until my later years of elementary school where I started playing travel basketball in Grade 7 and 8. Once I got to high school I had to choose between three sports in the winter to keep me busy: basketball, swimming or indoor track. I choose swimming and I believe that’s a huge reason for some of my overall strength and aerobic capacity right now. I still like to get in the pool a few times a month to cross-train.

CK: Does your brother run?

CB: He has dealt with many injuries since high school and was busy during his time in university as he was a mechanical engineering student but he did coach himself to a sub 4:00 1500m last summer. I reckon he could be low 3:50’s in the 1500m and low 1:50’s in the 800m if he never got injured and was not in such a demanding program during university.

CK: I understand that you will be racing cross-country this fall. Interestingly, you can run the 400-metre quite well and of course the 1500-metre is currently your main event. You also race well in cross-country, showing excellent range. How do you keep a healthy balance of quality in both neuro-muscular speed as well as aerobic fitness?

CB: I keep a healthy balance of speed and strength by doing just that. During cross-country, it’s all about trusting the mileage you’re putting in and developing as well-rounded and strong of a base as you can. There are usually some shorter cross-country intervals throughout our weekly workouts that allow me to tap into a bit of speed but if not, I ensure quality strides during warmup or after runs. Funny enough, my current 400m PB on paper is still 50.09 from many years back (even though relays and workouts I have run much faster). I will be looking to hopefully run one in the coming year to get rid of that. I also believe our weightlifting throughout the year helps keep the speed/power high and allows quick use of my firing muscles.

CK: What sort of off-season weekly volume do you get up to?

CB: In between seasons I usually take 10 days of active rest (ex. Bike occasionally, play basketball, beach volleyball, swim etc.). Specifically, during the fall I will average around 90 miles a week with two lifting sessions, three core circuits and the occasional cross-training day.

CB: Absolutely. It won’t be a long one with a huge amount of races but, Dennis and I will target 4-5 races for the season ranging from 800m-3,000m.

CK: What do you make of the Kenyan doping debacle? With all of the positive tests recently, do you think there will be a big shift at global championships?

CB: It is always unfortunate to see doping in our sport as it robs so many people of their deserved glory, sponsorship dollars, among other things. I do not agree with it at all but I cannot control what others do. I just want to play my part in making sure the sport stays as clean as possible by cooperating with WADA and our national counterpart, CCES.

CK: Back to the beer mile, you ran approximately 4:24 on August 11 in Vancouver and left a little extra foam so the performance was annulled. If you drank the extra .04 ounces of beer, the time would still be 4:25 or better. You hesitated with opening the first beer adding time. In a perfect race, on a perfect day, do you think you can run a 4:19?

CB: In a perfect race it is still so hard to say what the fastest time possible could be because although I was DQ’d, I didn’t think 4:24 was possible. Even though I always say it is for fun and I don’t take it too seriously, once I am in the race my competitiveness takes over and I treat it just like any other race. That’s just how I am wired.

CB: Most likely the 1500m but with the way my speed came around this summer during workouts (hit 22.xx in a 200m three workouts this year). I believe if we do more specific 800m work, it is a major possibility. That being said, next summer we will play around with both events.