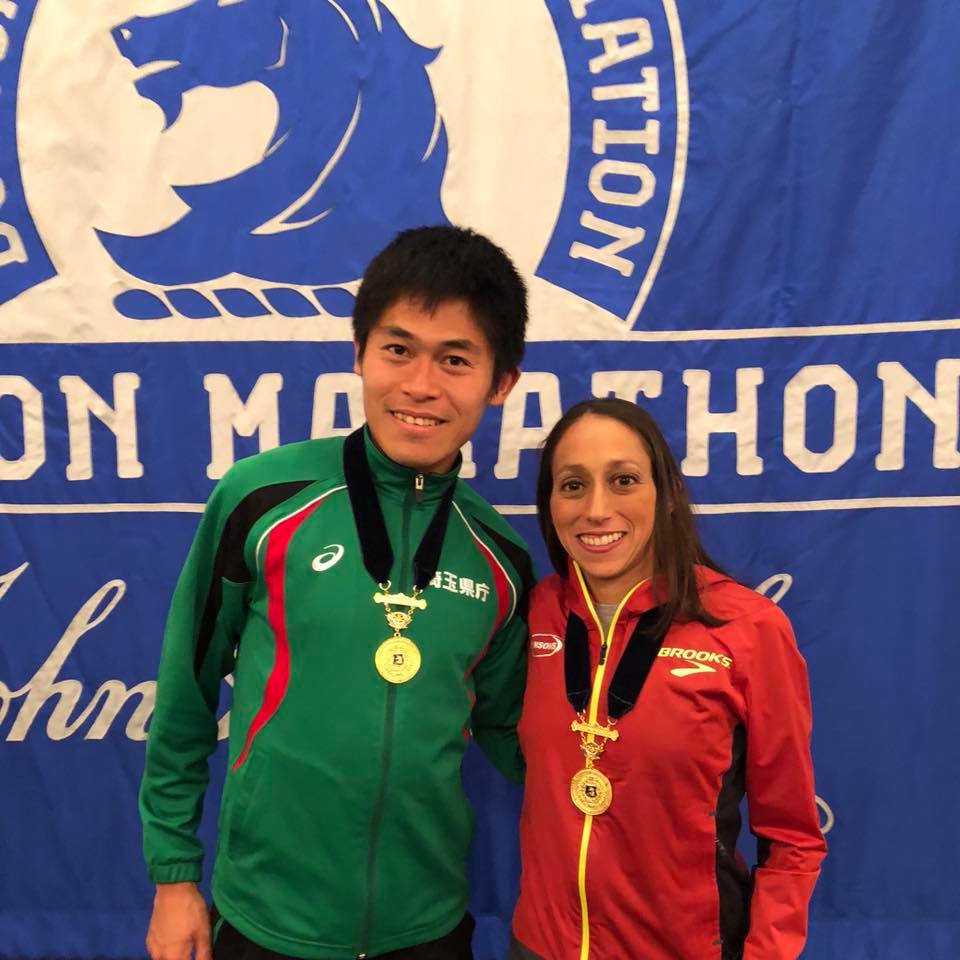 Desiree Linden broke a 33-year American drought, by winning the 2018 B.A.A. Boston Marathon. She won in adverse conditions. While her competitors were dropping out or having rough races, she seemed to persevere. The 34-year-old won in the time of 2:39:55, well off of her personal best of 2:22:38 from the 2011 edition. The cold air and heavy rains levelled the playing field and she took advantage. It was a career-defining race.

After growing up in Chula Vista, Linden ran for Arizona State University and earned All-American honours twice. She went on to compete in the 2016 Rio Olympic Games finishing seventh in the marathon with a time of 2:26:08.

Linden finished second in the 2010 Chicago and 2011 Boston Marathons.

She now runs with the Hansons-Brooks Team in Rochester Hills, Michigan.

Christopher Kelsall: Can you describe in words what it felt like to walk into your hotel room, away from the media and crowds and the cacophony of the Boston Marathon, and take it all in as the 2018 champion?

Desiree Linden: I think it was a combination of disbelief that it actually happened, and also an enormous weight off that I hadn’t realized I’d been carrying around forever, I finally had accomplished something that would mark my career as a success. There was just a tiny window to process everything as I had obligations lining up and desperately needed a hot shower.

CK: Arguably, your best performance in a marathon is from the 2011 Boston event, where you finished in the time of 2:22:38. This is fast enough to win on the right year. With the field that was lined up for the 2018 edition, where you standing on the start line thinking about a win?

DL: I’ve always thought about the win in Boston since 2011, and that includes before that race even started. I’ve always been pretty vocal about chasing that win as well. In 2017 I said I needed to “either deliver or shut up about it” and I didn’t get that done in ‘17, it didn’t mean the goal changed in 2018, I just didn’t feel the need to put it out there this year.

CK: You waited for Shalane Flanagan while she went to the washroom. At that time, you must have been thinking that a win was out of the question. At what point did you think that the win is yours for sure?

DL: I was never certain that I had it put away. I know crazy things happen in the marathon and when it goes south it unravels in an instant. Knowing that I didn’t do everything right early on I was running pretty afraid late in the race. I also never looked back and I just assumed someone (Chesir) was lurking right behind me letting me block the wind and waiting to move. Heading on to Boylston, I felt like I had enough strength to respond if anyone were to challenge me on that final stretch and once I passed the Lenox Hotel where I was broken in 2011, I liked my chances to win.

CK: It appears that you have run some of your best performances in cooler temperatures. Would you suggest that you are more suited for cooler and more adverse conditions, rather than heat?

DL: I’ve had some really solid races in the heat as well. I like challenging conditions, anything that requires more thinking and race savviness.

CK: At what age did you drop soccer for middle-distance running?

DL: I fully committed to running when I got to college at Arizona State.

CK: Which position did you play? Did you play any other sports, growing up in Chula Vista?

DL: I started playing soccer at age 4 and pretty much played every position at some point. I always loved playing left forward. I played softball for a few years; it was too boring for me.

CK: Apparently, you have an interest in collecting whiskey. Are you more of a bourbon, rye or grain whiskey drinker?

DL: I gravitate towards bourbon … but I don’t discriminate.

CK: What about a complex bourbon like Four Roses Al Young Limited Edition versus say a nuanced drink like Old Forester 1920 Prohibition? I assume on ice or straight up is the only way to sample them? Does it break your heart when people add an ounce to say an eight-ounce glass of Ginger Ale?

DL: Ha! Cracking up while simultaneously shedding a tear. I say drink it however you enjoy it. I’m all for sampling anything. I’m not totally sold on a single taste or profile, so both sound intriguing.

And I say drink it however you enjoy it… but that’s sacrilegious and I’d like you less as a human.

CK: Would you like another crack on your best of 2:22:38 on a course that the IAAF recognized, like Berlin?

DL: No, I’d rather the IAAF just recognize that Boston is a true marathon course, but I would like another crack at my PR.

CK: How has your marathon training changed since joining the Hansons?

DL: I’ve only done marathon training with the Hansons. As I’ve gotten older and more experienced I’ve gotten to know what I need and what tweaks in training might benefit me, so the major change has been more freedom in making changes to the program based on knowing my own body.

CK: How much weekly volume do you fit in when not tapering or recovering from a marathon?

DL: The past few marathons I’ve been holding 125-130 miles per week. This marathon segment I dialled in back just a touch and topped out at 120 or so.

CK: What are your goals for the next year or so?

DL: To be determined as we are weighing fall marathons at the moment.

CK: Currently at age 34, do you hope to race in the 2020 games? Older athletes like Carlos Lopez and Constantina Dita and Lorraine Moller have medalled in past games.

DL: That’s been the game plan and still is for now. The beauty of getting a meaningful win is I can be as picky as I want moving forward. The rest of my career is the gravy so I don’t want to overindulge I just want to pick races and events that are really meaningful to me.