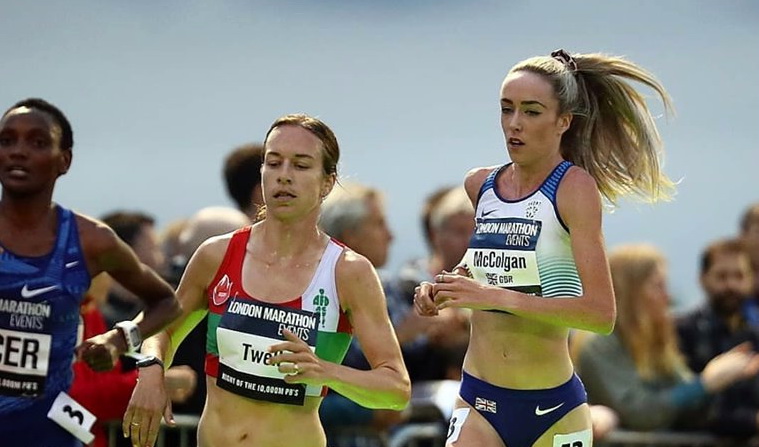 Eilish McColgan is a Scottish distance runner who competes primarily in the 5,000m event.

McColgan is the daughter of the legendary Liz McColgan-Nuttall (Lynch) who was competitive internationally over the 3,000m to 10,000m distances as well as the marathon and won gold at the 1991 Tokyo World Track and Field Championships in the 10K.

Her father Peter McColgan was also an international athlete who competed in the 3,000m steeplechase for Northern Ireland and also toed the line for Great Britain in the 1991 Tokyo meet.

Eilish McColgan is coached by her mother.

She competed in the 2012 London and 2016 Rio Olympic Games and is aiming for the 2020 Tokyo Olympics. She also competed in the 2014 Glasgow and 2018 Gold Coast Commonwealth Games. Eilish earned a silver medal in the 2018 Berlin European Championships in the 5,000m event.

After a few near career-ending injuries, she has her program well planned out and is able to pull off world-class performances even though her mileage volume is modest. This summer she has run personal bests in both the 5,000m and 10,000m events. She currently is focussed on performing well at the 2019 Doha World Championships in Athletics starting September 27.

Christopher Kelsall: Congratulations on how well your 2019 track season is going.

CK: You likely could have had a strong NCAA career, but you chose to stick to Scotland for post-secondary education. Was that decision about keeping close to your coach, who of course is the legendary Liz McColgan?

EM: It’s a small regret of mine, to be honest. I wanted to stay at home where I was comfortable with my family and friends and then when I got to university, I contacted a few places but my running wasn’t going very well so my options were very limited. I was very close to accepting a place at Oklahoma but again, I was too scared to really go through with it all and decided to go to university in Scotland where my boyfriend and the rest of my training group were going. Of course, now I’m happy with the way things turned out but I feel like a scholarship could have opened many doors for me at the moment in my career. Instead, it took me a few years before I really foot my place within the sport.

CK: Scotland seems to be having a bit of a resurgence in distance running, with you, Laura Muir, Lynsey Sharp, Chris O’Hare, Callum Hawkins, and others doing well. Do you find that now there is a good athletics culture there?

EM: I grew up alongside Lynsey, Chris, and Callum’s older brother Derek. So when Lynsey first made the GB team I remember thinking, oh I used to run with Lynsey. If she can do it, maybe I can do it? And since then I think that mentality has really filtered across all of Scottish Athletics. In the past, it was a big deal for one or two Scots to sneak onto the GB team but now we are looking to be placing into the top 10 in the world — so I think there’s been a real switch in mindset for Scottish athletes. There’s no doubt that Laura Muir is the one trailblazing that path and really opening our eyes to what can be achieved.

CK: Is your motivation to train smart and race well borne as much from having such talented parents in the sport as it is by having a couple of big injuries in 2006 and 2011, respectively? You know, having the sport taken away by something that was out of your control?

EM: I’ve learned so much from those big injuries. In 2015, I broke my ankle and had further surgery so I now have seven screws and a metal plate in my left foot. It made me so much stronger both mentally and physically because I wanted to prove to myself that being out of the sport for so long and pushing myself to the limits in the swimming pool, spin bike, and cross trainer would be really worth it — in the end!

CK: Do you remember watching your mother compete in the 1997 and 1998 London Marathons, where she finished second both times? You would have been seven and eight, yes? What was that like for you?

EM: I have no recollection of my mum racing or even training to be honest. My parents always really sheltered me away from the sport — perhaps because they wanted me to have a normal upbringing and choose the sport myself rather than be pushed into it. I genuinely don’t remember any running-related memories as a kid.

CK: Your new (July 6) 10,000m personal best of 31.16.76 was a pretty stunning performance. I assume you plan to compete in the event at the Doha World Athletics Championships, yes? If so, is there any need to do any other racing this summer?

EM: I actually don’t plan to compete over the 10,000m. I’m a little shocked at how well I ran because I don’t train specifically for that event. It’s the very top end of my range, to be honest, so I’ll be aiming for the 5,000m in Doha where all my training has been gearing towards. I actually only run 45-50 miles (60-80K) a week, cross-train 3-4 evenings a week, and never double run, so I feel to race the 10,000m at a major champs — I would have to be doing a lot more miles in order to have the strength in my legs that I would need to compete against the top girls in the world.

EM: The 5,000m remains my aim. Of course, anything can happen at the 5,000m trial so it’s always nice to have the 10,000m there as a backup but ideally, I would like to compete over the 5. I feel I would be more competitive over that distance.

EM: To be honest, I don’t actually know. I tried not to focus too much on pace and to just hang onto the top group of runners for as long as I possibly could! It wasn’t until the last three laps that I realised I was on for sub 31:25 pace and so really gave it everything I had over the final 600m because I really wanted to secure a qualifying time ahead of Tokyo next year. That’s definitely where I’ll be aiming for the 10,000m.

CK: Through the years you have moved up through the events performing well at nationals, then Commonwealths and then Euros. With the two performances do you feel ready to execute on the day in Doha? In a global championships event like worlds, what will you have to do to stay competitive?

EM: I always just focus on improvement. If I can keep continuing to get faster – no matter how many seconds that consists of – then it means I’m moving closer to the top girls in the world. I never focus on places or medals – I always just focus on my own performance and hope to run faster than I did previously. It’s a mindset that works for me because you can’t control the other athletes in the race but if you finish in last with a personal best then you can’t complain about that!

CK: Tell me about your training.

EM: I only run once a day which is quite unusual for distance runners but we were forced into that routine after my last surgery in 2015 and just haven’t changed things since then because I’m continuing to improve! Mileage-wise — I’m running around 45-5 0 miles each week (60-80K). When I’m racing it will go down to and around 30-35 (50-60K).

CK: You have said a couple of times that you would race some 1500s to sharpen up. Is that how you peaked for this summer?

EM: I don’t feel like I’ve peaked just yet. My coach and I know that I run fast when I’m consistent and healthy. The hardest part for me is staying healthy! If I can get six weeks behind me, consistent sessions, nothing spectacular — I can get into shape quite quick. My speed comes through my strength and so 1500s are great for training purposes as it gains me a lot of speed to take into the longer distances.

CK: So you have been healthy this spring, I take it.

EM: I only really had six weeks of feeling healthy again after a difficult season indoors with a virus. A healthy body is a happy mind and one that can run fast. From this month onwards we will start to focus on my 1500/3000m pace in the hope it peaks me at the right time in October.

CK: At 28, are you starting to plan for when you may make a run at the marathon as your mother did in the latter half of her career?

EM: I’ll definitely be looking to run a marathon after the Tokyo Olympics. I feel like that will be a great place to move on into something a little different and to challenge myself in new ways!