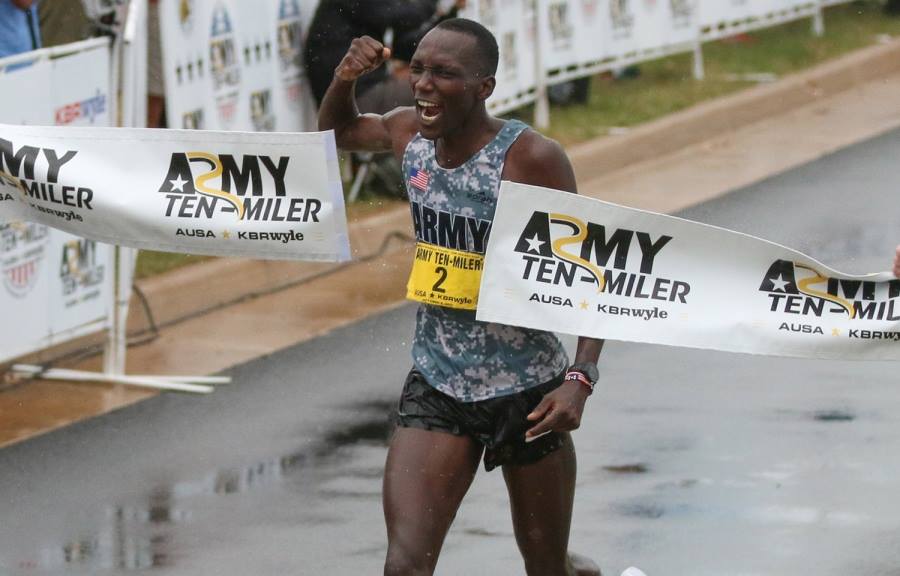 Haron Lagat is a Kenyan-American distance runner who lives and trains in Colorado Springs, Colorado.

He is hoping, at 36-years-of-age, to qualify and compete for the US at the 2019 Doha World Athletics Championships as well as the 2020 Tokyo Olympic Games. This summer is one of the last chances he has to compete in a major global championship wearing the red, white and blue.

In 2016, he was caught in the middle of a panic-freeze on transfers of allegiance, a term used to describe athletes who switch countries that they wish to represent in international competition.

The transfer of allegiance infractions appeared to be perpetrated mostly by Bahrain as they apparently paid Kenyans to run for them by automatically offering Bahraini citizenship.

At the time, there was a moratorium that should not have applied to Lagat, who was educated in the US and began to serve in the US Army, but he was.  The governing body the IAAF held the line for all, which left him in limbo. He has since been approved to run for the US. Subsequently, he ran an international-level half-marathon with a 61:01 performance during the 2018 Houston Half Marathon.

Christopher Kelsall: Your fight to compete as a representative of the US is well documented. There was a Change.org petition and many interviews and articles where the issue was brought up. The IAAF website lists you as American. Are you now able to compete as an American?

Haron Lagat: Yes, I was cleared to represent the United States early summer last year. I still believe the IAAF was wrong because they did put everyone on the same bus even some of us who went to school in the states and have lived here half of our lives. There are lots of ways for them (IAAF) to know the legitimacy of transfer of allegiance from filing of tax, lease, driver’s license, insurance, property then just saying we are gonna be frozen.

There are lots of students who have gone through USA school system for years and they shouldn’t be in the same category with someone who goes to a country for two days for biometrics and come home with a passport. They should be scrutinized differently. We will never stop immigration of labour and it has been happening since the Pope was an altar boy. If your great-great-grandparents immigrated in past centuries, it is no different with tomorrow’s or last week’s immigrant. Some just came or wanted to come early before us so long as it is within the immigration rules.

CK: With the new rules, a three-year waiting period was added. Was that waived, since you had been in the US for at least 16 years already?

HL: Actually, I didn’t get any waiver because I submitted my paperwork before the freeze came but for some reason, USATF sat on them. The reason they had given me at first was that they didn’t know the change of allegiance freezing policy by the IAAF was coming. All in all that is done and dusted.

CK: What do you have to say to Kenyans who transfer to countries like Bahrain or Turkey on a whim? Do they actually not know what they are getting into or is that a fake plea of ignorance?

HL: We are all looking for better lives but it should be ethical and voluntary. Immigration is a 21st-century phenomenon but it should be done within the rules. With my case, this was something I wanted to do since I was in high school, to come to the USA for school and to have my kids here. And it didn’t take me a week or staying in a hotel for a weekend to get my US passport. I don’t believe you can be a citizen of the country that you don’t know the culture, constitution or the language. Money should not change hands for an athlete to represent a country in major championships because that in some ways is not ethical. I don’t know how it’s done in Bahrain or Turkey but I hope under-age athletes or those with less knowledge are not being used for the benefit of a few.

CK: In June of 2018, you were talking about running a marathon in the fall but that didn’t happen. You performed well that year with a half-marathon in 61:01 and a 20K in 60:29. Will you continue to chase the marathon distance this fall with Tokyo 2020 coming?

I have been running over 200km per week for the last six weeks.

I trained for California International Marathon (CIM) which was scheduled on Dec. 2 2018, I was in very decent shape but unfortunately, I got injured two weeks before the race. We thought with two weeks of tapering, I would be fine for it but unfortunately, I had to stop at 21 miles. I had a torn soleus and Achilles tendonitis which is all good now but it took three months to be able to run again.

CK: Are you inspired by Bernard Lagat’s 2:12 marathon (US record) for masters at age 44?

HL: Bernard and I have come a long way as friends and as his main pacer in races that he wants a quick time. We have raced lots of races together from Fifth Avenue Mile, roads, track and the only time I have beaten him was in the Houston Half. That tells how this old man is young. We talk with Bernard weekly and one thing he told me in 2008 was “never sell yourself short” that is when I was just a pacer, he challenged me to start finishing races and I am glad it has paid off.

For your information, Bernard’s brother Robert is our assistant coach. Bernard trained here in Colorado Springs for his marathon preparation, we did a few runs together but our 40k long run was different because he wanted to keep it in the pavement and on flat course and mine were on a hilly course and on dirt roads. So his brother had to wake up at 5:00 am and bike to help with my liquids then at 8:00 am he was biking helping Bernard. His 2:12 was motivating for sure.

CK: What made you move from Kenya to the US at age 21?

HL: I moved to the USA to pursue my education through athletics scholarship. This is what I wanted since I was a kid and lucky enough I joined St. Patrick’s high school in Iten, which I’m sure has produced more Olympians than any high school in the world in track and field. So with the help of my high school coach Brother Colm, everything was made a little easier to come to the states.

CK: How was Texas Tech for your development?

HL: I was very lucky to get a full ride to attend Texas Tech University because it changed my life for good. West Texas is very unique from the big cotton fields to the nicest people. I developed as an athlete and an adult in Lubbock. After high school, I wasn’t ready to run professionally and going to Texas Tech bought me some time. Remember, I was in a high school where there were lots of world junior and youth champions who went pro right away after high school. I wish I could have helped them win more championships as I was derailed by injuries. Glad to have learned a lot about coaching from Coach Murray and Wes Kittley as they were nice enough to let me coach after I graduate. We won lots of Big 12 cross country champs, regionals and one time we were third in the nation. I still stay in touch with Coach Murray, and I still help recruit for them. I was so happy when they won national champs because no one deserves that more than Texas Tech Red Raiders

CK: What else is on your schedule for this summer?

HL: I don’t have lots of races for summer because I want to have uninterrupted marathon training. I will be doing Boilermaker 15k this weekend just to break up my training. It’s great to have a week of less intense training and less mileage. It helps mentally before I get into the second phase of my marathon training. I’m qualified for USA outdoor champs in steeplechase but I’m officially retired from track.

CK: What is your favourite type of run? For example, do you like a long steady run off-road, or a specific workout, or a tempo run of some sort?

HL: Running for me doesn’t have a magic workout or run. I like all runs whether threshold, speed endurance, endurance or speed but I love any form of fartlek. It gives joy because I get to play with a lot of patterns of fartlek 4’2’, 3’1’, 1’1’ minutes on and off, like that.

CK: Who were some of your heroes growing up in Iten, there could have been many!

I knew I wanted to take a different route in my running career and that was going to USA through track scholarships. Most of my school friends and those I have mentioned above went pro soon after high school. When Bernard visited our camp late in 2000, I got hooked to him I have some magazines of Bernard when he was in Washington. It’s unbelievable he has been more than a mentor to me.

CK: What is going on in Kenya with many of the new positive doping tests? The perception of the Kenyan athlete is changing.

HL: With all the athletes that have tested positive I’m sure the perception of any Kenyan athlete is bad. It makes everyone look like a cheat which is not true. A lot of Kenyan athletes run clean but the number of Kenyan athletes is large compared to other nations thus, it is easy for large frequencies on doping to happen. I think the federation needs to increase seminars and materials about doping to help athletes access knowledge about doping, attitudes and why they should run clean.

Also, with the new biological passport test, there is nowhere to hide anymore. This situation has been made worse by the fact that there is no second chance. Athletics Kenya (AK) decided that any athlete involved in doping should forget returning to active running. AK passed a resolution in April that any athlete who was sanctioned for abusing banned substances would not be allowed to represent the country even after serving IAAF suspensions.

I hope it brings sanity to Kenyan athletes. I believe the sport of long-distance running need Kenyans and we need the sport as it has it changed lives; play by the rules.