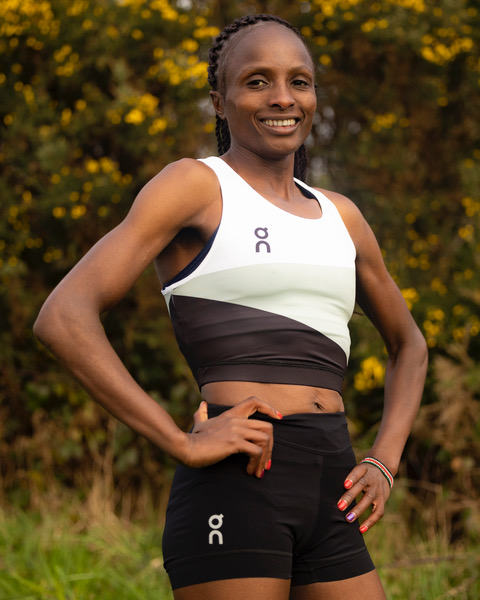 Kenyan distance runner, Hellen Obiri, is moving “On” to the On brand team and she is moving up to the marathon distance from her most competitive event at 5000m.

The two-time Olympic 5000m silver medallist and world champion has proven herself to be competitive over a range of distances and disciplines, including winning at the World Cross Country Championships, World Athletics Championships and the two silver medals from the Olympic Games. The roads are next, where she is expected to challenge for wins in the big city marathons starting in 2022.

Obiri was cited as one of the 100 most influential Africans by New African magazine in 2017.

Christopher Kelsall: Congratulations with your signing with On. The brand is really emerging. What made you choose them?

Hellen Obiri: On is a very exciting brand that is growing fast. I considered a lot of different sportswear companies but chose On as I feel we can help each other perform well over the next few years. On made me feel very welcome and I hope to put the brand on top of the podium in the big races.

HO: My favourite training shoe is the Cloudstratus — this is the one I have been doing most of my training in. The product team are working on a new racing shoe which will be launched soon.

CK: You have a competitive range with the Kenyan mile record as well as your Olympic silver medals in the 5000m. Your half-marathon is very fast too at 64:51. Which distance do you prefer to race over?

HO: My most successful event so far has been the 5000m, so that would be my favourite. I started out as a 1500m runner and gradually moved up in distance. My focus now is road races and marathon.

CK: Any chance that you will have time to go from the Eugene World Championships and then race the Berlin Marathon? Or have you even chosen a marathon to debut at?

HO: My manager and coach is working on my competition schedule. I have a few spring races confirmed and plan to make my marathon debut in the autumn, but we have not decided which race yet.

CK: Regarding 5000m training, how much weekly training to you get up to in the off season versus when racing?

HO: I was averaging 150km per week for the past few years. I normally reduce my volume leading into important races.

CK: Growing up in Kenya, you have your choice of who to admire as distance runners. Who did you look up to while in school?

HO: Vivian Cheruiyot was the athlete I looked up to. I was fortunate to get the chance to join her group in 2010 and train with her and eventually we took gold and silver in the Olympic Games 5000m in Rio in 2016. Vivian has been a great inspiration to me and many other female athletes in Kenya.

CK: During the Sydney Olympics, Lydia Cheromei, finished sixth in the time of 14:47.35. Gabriela Szabo of Romania won in 14:40.79. You were 10 years old; did you watch those Games? Did you ever dream that one day you would run half a minute faster than them?

HO: I didn’t watch the Olympic Game in 2010. I had no idea about sports back then.

CK: Is there a different indelible moment from your youth that made a big impression on you?

HO: The moment that stands out was when I first represented my country. I was very proud to have reached that level.

CK: At what age did you get serious about your running?

HO: It was when I was at high school that I discovered that I had a talent for running. I joined the PACE Sports Management camp in 2010 and that is when I started training seriously. I won the Kenyan Championships 1500m title in 2011 and made the final of the World Championships but got tripped and fell in the final. I was also tripped on the last lap in the 2012 Olympic Games final but came back to win bronze in the World Champs in 2013.

CK: Considering the heat, and the time that you finished in, would you consider the 2019 Doha gold medal performance as your best showing internationally?

HO: I am very happy with all my World titles. Winning the 5000m in 2017 in London ahead of Ayana and Hassan was good.  Defending it in Doha 2019 was great, especially after the disappointment of finishing fifth in the 10,000m. My first world title was over 3000m indoors in 2012 where I beat Defar and Burka. Possibly the hardest was the World Cross Country in Aarhus in 2019 over 10k on a very tough course.

CK: Back to the subject of the marathon. Will you run strictly professional marathon events (marathon Majors) or would you look at Paris 2024?

HO: I would like to run the big city marathons and the championship marathon. I have two Olympic Game silver medals and would love to get a gold in Paris or LA.

CK: Do you have a goal time that you would like to race the marathon in or are you more interested racing the other women and finish as high up as possible (and of course win)?

HO: The main thing is always to win. Only two women have broken 2:17 so far. I would like to be the third.

CK: For the spring of 2022, which events do you expect to race in to get fit for Eugene?

HO: For now, I have two big half marathons lined up in February and March but I don’t think they have been announced by the organisers yet, then a few 10k’s on the roads in May.