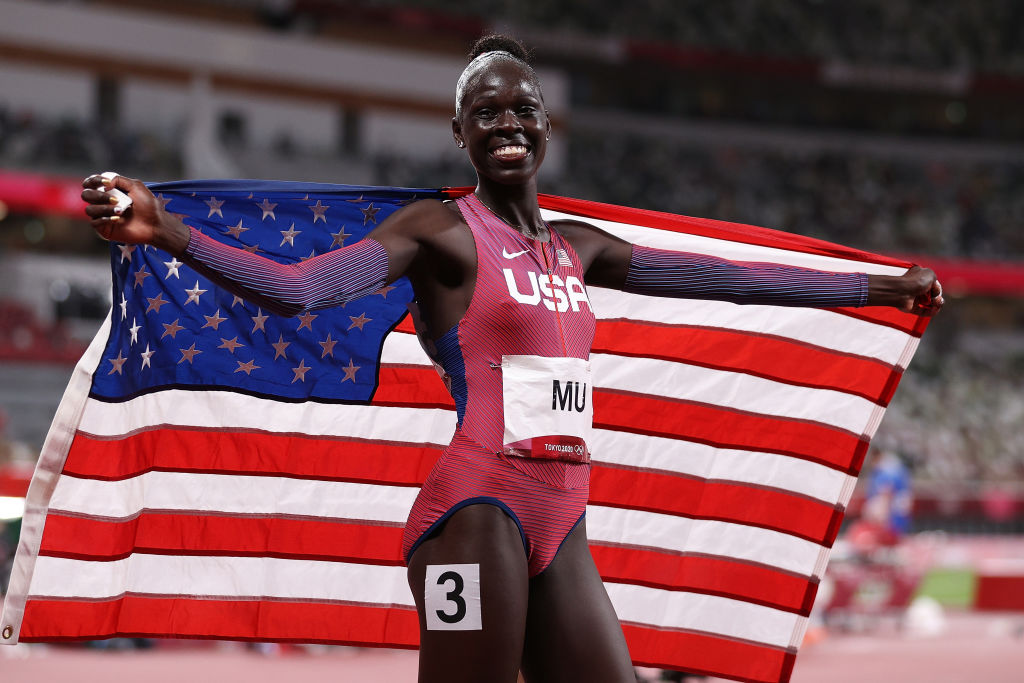 Athing Mu (pr, “Mo”) is not a rising star. She has already arrived. The 19-year-old is on top of the world and she makes it look easy. She makes interviews appear effortless, she breezed into the Tokyo Olympics and won two gold medals, and has now won the Prefontaine Classic Diamond League 800m; her specialty.

Saturday, the kid from Trenton, New Jersey clocked a 2021 world-leading time, national record, meet record, and of course a personal best time of 1:55.04.

Fellow American Kate Grace is no slouch with her personal best of 1:57.20 which she achieved in July this year in Monaco. Grace ran close to that in Eugene on Saturday, but that is 2.56 seconds off of Mu’s time. That’s a lot when you are a world-class middle-distance runner. For Natoya Goule of Jamaica, it is all she had to finish in third place in the time of 1:57.71. Her best is 1:56.15.

Not too long ago, running sub-two minutes, was an important barrier, six of the nine athletes breached the benchmark. But it was all Mu, all the way.

Mu in Tokyo and world ranking

Her Tokyo performance was outstanding at 1:55.21. She crossed the finish line in a new American record improving upon Ajee Wilson’s 1:55.61 from the Monaco Diamond League in 2017. Mu, the Texas A&M Aggie, now has the two fastest American performances of all time.

Her Prefontaine Classic performance is the 17th fastest 800m race in the world, ever.

Three of the performances ahead of her on the all-time list were achieved by suspected drug cheat, Jarmila Kratochvílová, of the Czech Republic who continues to own the world record at 1:53.28. Four of the times ahead of her are by Caster Semenya, an intersex athlete who produces a volume of testosterone that non-intersex female athletes would be banned for doping if they had that much in their blood. The last athlete (besides Semenya) to run faster than Mu is Kenyan Pamela Chelimo in 2008, with four faster times.

Typically, athletes want to run the 800m with a positive split — that’s the norm — but not for Mu.

During the Tokyo Olympics, the first three women all ran negative splits. The rest of the field didn’t. This is new. The last time anything happened like this was in 2015. It’s the dawn of a new era, a new style of racing in the 800m. Mu not only negative or even splits her 800m races, but she also leads from the gun. This is yet another change in strategy that in the past was considered risky.

What she is doing works for her, and at 19, she has a long and probably prosperous career in front of her. She is going to continue to make it look easy.