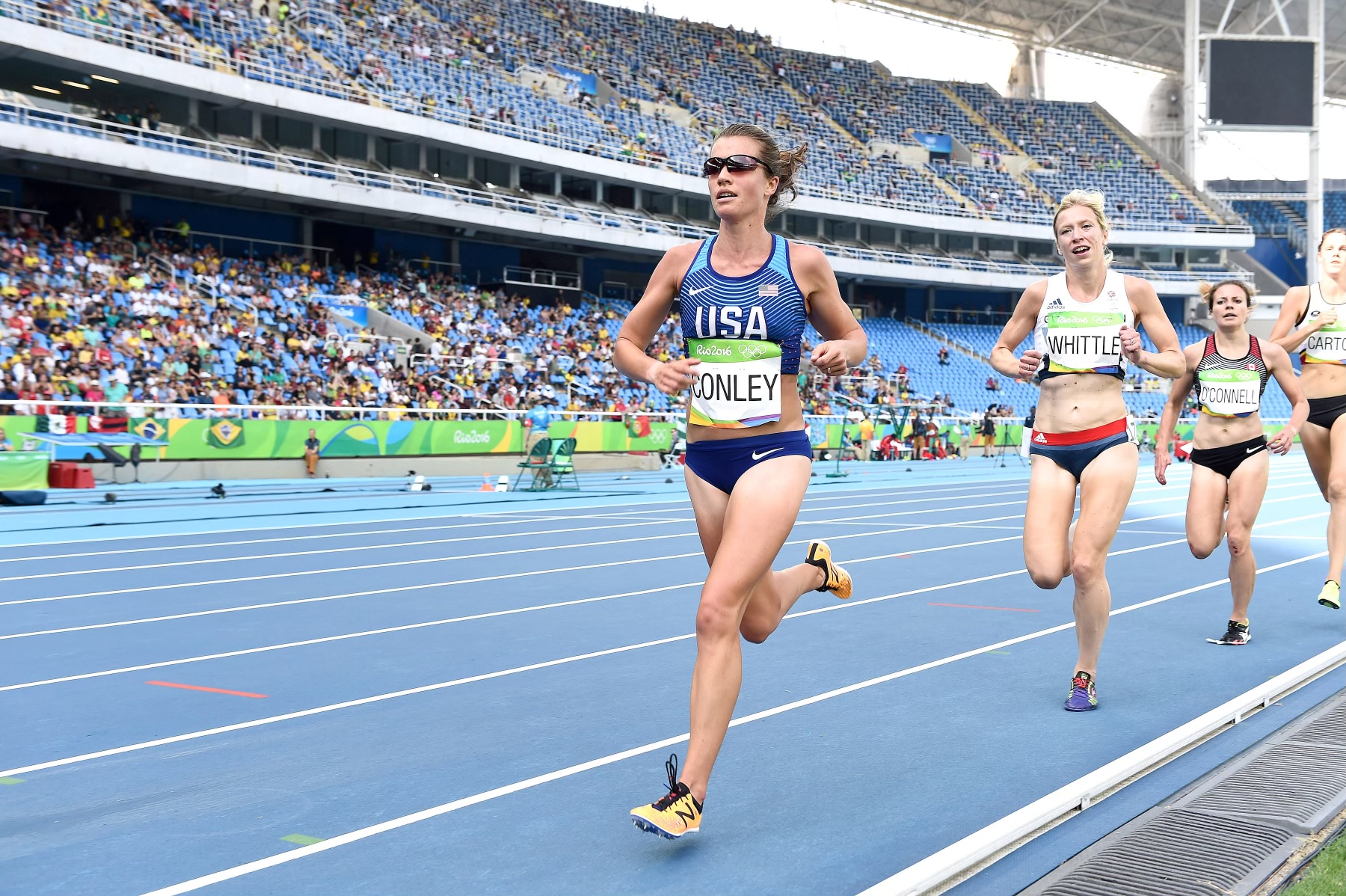 American distance runner Kim Conley is looking to move up to the marathon distance.

During her career, the California native has competed at a high level consistently across a range of distances from 1500-metre event up to the half-marathon. Arguably her best performance was in the 10,000m where she clocked a lifetime best of 31:35.88 at the 2017 Payton Jordan Invitational.

Now age 36, she has moved into coaching others, while maintaining her training toward a marathon this fall.

She currently lives in Flagstaff, AZ with her husband and dog.

Christopher Kelsall: Growing up in Santa Rosa, CA was there a good sporting culture to motivate you?

Kim Conley: I grew up during an amazing era of high school distance running in Santa Rosa. When I was a freshman at Montgomery High School, Sara Bei (now Hall) was a senior. As a team, we won the state meet in cross country, and she won as an individual in an epic battle with a league rival. The third fastest girl in our league that fall had outkicked Sara to win the 1600m state title the previous spring. Somehow, the best athletes in the state of California were concentrated in our league during the early 2000s. It was motivating, but I also didn’t consider myself to be at the same level.

CK: Well Sara of course has gone on to do great things. You are consistent from 1500m to the half-marathon. Looking back, what were your goals coming out of high school?

KC: Coming out of high school, I was excited about competing in college. My dream was to qualify for the NCAA Championships and earn All-American honors. I didn’t qualify on the track, but I did once in cross-country. I finished 80th in the 2008 NCAA Cross-Country Championships, a long way from an All-American position.

CK: What sports did you grow up with?

KC: I played soccer, basketball, and softball as a kid. I replaced softball with track as my spring sport when I was in Grade 6, and in high school, I narrowed my focus entirely to cross country and track.

CK: You can tell a lot about a person by the positions they played in those sports, so the theory goes. Which positions did you gravitate toward?

CK: I had you pegged at centre-mid. At what age did you decide that running is your thing and that you are going to make a serious go of it?

KC: Freshman year of high school. I tried out for basketball and made the freshman team, but my cross country coach convinced me that if I dedicated myself to running then I had the potential to develop into a college-level athlete. At that point, I decided to spend the winter training for the track season.

KC: When I ran that time in 2016 I approached the race with a track mindset, surging to try to bridge gaps and generally lacking patience. The second half of the race was a humbling, hellish, grind. I was also coming off the Rio Olympics. In hindsight, making my marathon debut at the New York Marathon was too big an undertaking at the end of a year that was already big and emotional. I distinctly remember hitting the 16-mile mark at the top of the Queensboro Bridge and feeling utterly exhausted. I forced myself to get through 10 more miles before I could bring the year to a close. It wasn’t the dream outcome or experience for a debut, but it left me with a healthy respect for the marathon.

CK: Apparently, you are looking at running the Toronto Waterfront Marathon in October. It’s a fast course. What sort of time are you hoping to get there?

KC: We’re still finalizing where I’ll run this fall. To be honest, our focus is more on finding the right fit where I’ll have a better experience tackling the distance. The focus on this race is more about walking away excited about becoming a marathoner than hitting a certain time. That being said, I think a fast course would help create what we’re looking for. New York was a very hard course.

CK: How is the transition to coaching working out for you?

KC: Coaching has been great! I love the relationships I get to build with runners across the country (and one in Canada!). So many of them love the marathon, it makes me excited about getting it right for myself.

CK: Dare I ask who the lucky Canadian is?

KC: Her name is Blythe Doole and she lives outside Toronto. She qualified for Boston at the Mississauga Marathon this spring!

CK: Supershoes, were they a great or not so great addition to the running world?

KC: I admit I was disappointed with the development initially and eventually came round to accepting them. Now I believe that distance runners can perform later in their careers by training and racing in them, so I’ve come to the opposite end of the spectrum from my initial take, and I’m excited and grateful to wear them.

CK: And your shoe of choice at this time?

CK: At age 36, you have time to get the marathon right. For example, Canadians Natasha Wodak and Malindi Elmore nailed the Tokyo Olympic Marathon at age 39 and 41, respectively. Wodak, like you, had a modest pb, when she ran Toronto to check it out and came back years later to run the second fastest Canadian time to qualify for Tokyo. Are you hoping to compete at the 2024 Paris Olympics?

KC: Certainly one of my big picture goals is to run at the Olympic Trials in 2024 and hopefully to have developed into a marathoner that can contend for a top three finish. I have watched Malindi and Natasha and have been very inspired by their success. I also believe that there is still time for me to get the marathon right and enjoy a new phase of my career.

CK: What does a good training week look like for you?

KC: Two workouts, a long run, two strength sessions, and total mileage in the 90-100 range. If the sessions all go well and I can walk away feeling like I have more left in the tank, then that’s a good day/week.

CK: How do you typically approach the long run in terms of effort, distance, and terrain?

KC: My approach varies. Sometimes a long run is simply easy time on feet, sometimes I ramp up the effort as I go, and sometimes it has specifically scripted quality elements to it. Typically my longest long run is two hours, except in a marathon build-up.

CK: Outside of athletics, what other interests do you have?

KC: I enjoy hiking, reading, and travel. I live in Flagstaff, Arizona with my husband and dog, and I love afternoons when the three of us can go for a walk among the Aspen.

CK: Is the foliage recovering from the forest fires? Is that tough to look at on a hike?

KC: The latest fire we had in June made me really sad. There are many trails I love to hike that were in the fire’s direct path and we lost the vegetation in those areas. I’m especially sad about the Aspen groves.

KC: Right now I’m reading In Search of a Kingdom by Laurence Bergreen, which is about Sir Francis Drake, Queen Elizabeth I, and the British Empire in the 16th century. Next, I’m planning to read San Fransiko: Why Progressives Ruin Cities by Michael Shellenberger, which is the August book for my book club. It focuses on the approach to homelessness, substance use, and the criminal justice system in cities.

CK: Interesting eclectic choices. So, what sort of shape are you in right now? How close are you to being ready to take a more serious attempt at the marathon?

KC: My training is going well. I’m racing the Bix 7 Miler on July 30th, so that will give me my first true indicator of fitness. By the time I’m home from Bix I plan to have a marathon set and begin specifically preparing!