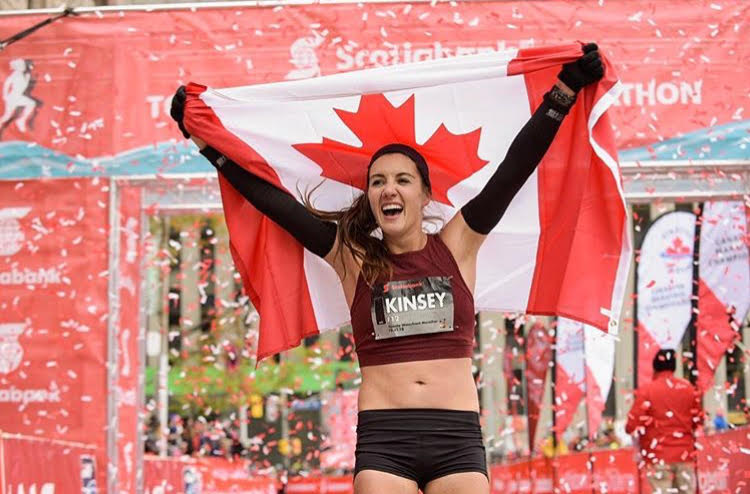 Kinsey Middleton (née Gomez) from Boise, Idaho ran the Toronto Scotiabank Waterfront Marathon on October 21st in the time of 2:32:09 to finish as top Canadian and national champion. She was the seventh woman overall.

It was her debut at the distance.

The American-Canadian athlete competed for Oregon State University and the University of Idaho over a five year period, redshirting in her final year at Oregon.

Her marathon is the third fastest Canadian debut all-time and will likely be better than the upcoming IAAF World Track and Field Championships and Olympic marathon standards, yet to be published.

Christopher Kelsall: Congratulations on your marathon debut in Toronto, running that 2:32:09. What were your expectations going in?

Kinsey Middleton: Thank you! Going into the marathon, I tried really hard not to have any expectations. Instead, I focussed on having a great first experience at this new distance. I wanted to give a good effort and race to my fitness, but I also wanted to be conservative and not have a “blow up” in my first marathon.

KM: My coach Kameron Ulmer told me to go through half in 76 minutes because he was confident I could sustain that pace. The workouts I did leading up to the marathon indicated about 2:32 shape, but as you said – you never know what will happen in your first marathon! I trusted the training I had done and decided to enjoy the unknown of it all.

CK: You looked comfortable out there. If you had some experience at the distance, do you think you could have attacked hard and perhaps run sub-2:30 on the day?

KM: I felt so comfortable – more so than I ever have in a race which is a good indication that I should do more marathons! I have no idea what I would’ve run if I had more experience in the marathon, but now that I’ve got one under my belt I definitely have faster times to chase! I won’t know if I can break 2:30 until I do it though, so we will just have to wait and see.

CK: Proverbial volume question – what sort of weekly mileage were you up to in preparation?

KM: I think my maximum mileage volume was around 125 miles (202kms) in one week.

CK: Do you enjoy the long runs? Some people seem to absolutely love them while others simply tolerate them, which camp are you in?

CK: Do you visualize solving world problems or play out race scenarios in your head while out on a long run? Or are you always in the moment on effort or pace?

KM: Usually on a long run I’m talking to my teammate Emma Bates or my coach Kameron Ulmer. I’m a bit of a “chatty Kathy.” But if I am trying to hit a certain effort in a long-run workout, then I’ll try to be in the moment and focussing on running relaxed.

CK: Of this writing, you are almost 26 years of age. You have had quite a few personal bests during 2017 and 2018 from 1500-metres and of course up to the marathon. Other than maturity what precipitated the jump in performance?

KM: Thank you! I think a big piece of my PBs the past few years has been consistency in my training. Through good coaching, strength work and making sure to get frequent massages, I have managed to stay injury free. I think the more years of consistent training you are able to get under your belt, the faster you will be able to run. Fingers crossed I can keep the trend going!

CK: Agreed – it seems the athletes that run well don’t have profound workouts so much as a long stretch of injury-free running. Staying injury-free, was that due to more trail running than asphalt and less emphasis on hard anaerobic sessions?

KM: I think I stay injury free for a variety of reasons. Probably the biggest reason I’m able to stay healthy is because 80% of my training is done on soft surfaces. I’m lucky to live right next to a pretty extensive trail system that makes training even more fun! I also do strength work and get a massage once a week as preventative maintenance. I think those pieces all make a huge difference! Also, I think the fact that marathon training is more mileage but less intensity helps with staying injury free. And finally, a smart coach helps as well!

CK: How would you describe your varsity career having run one year as an Idaho Vandal, and four for Oregon State?

KM: I started my university running career at Oregon State University and then followed my college coach Travis Floeck to the University of Idaho. I was lucky enough to have a great experience at both programs, but I definitely knew that I had more room to grow after college. Once I raced the 10,000m as a junior, I discovered that the longer distances were where my strengths laid.

CK: Being from Idaho, that was fortuitous that Floeck moved to the University of Idaho.

KM: It was definitely a homecoming of sorts to transfer and follow Travis to the University of Idaho. And I would not have met my husband if I didn’t transfer, so I would say it was very fortuitous!

CK: Plus you sound like royalty now with the name Middleton. Going to Coeur d’ Alene High, did you have a big rivalry with Lake City and Post Falls?

KM: There was definitely a rivalry between all of the local schools, but I would say my biggest rivalries were when I headed down south for State or when I competed in the bigger national races. I used to be so competitive that I wouldn’t even want to be friends with my rivals. But now I’m friends with all the girls I raced back then, and it’s so fun to see where running has taken all of them!

CK: Were you a junior when the girl’s won state in 2004 in cross-country? Do you remember that? Was that team performance a motivator for you to compete?

KM: In 2004, I was still in middle school when CHS won that team state title. But I do remember it. My babysitter growing up, Kristin Palmer was one of the women on that team. Watching them make history like that really inspired me.

CK: What sports did you play growing up in Idaho?

KM: I started running in kindergarten, but I also played soccer until Grade 8. All I did was run up and down the soccer field though.

KM: I was a midfielder and forward, but I did not touch the ball very much. My dad always joked after games that I needed to be more aggressive and actually go after the ball instead of just running around open.

CK: Did your father race after university? If so, did you get a chance to watch him or run with him at all?

KM: My dad would race Bloomsday every year. And I also remember both of my parents did the Hood to Coast Relay a couple of times. I would go on training runs with my dad from a young age. He always told me that he knew I was tired when he could get me to stop talking on a run. Now he jokes that he cannot push the pace enough to get me to stop talking while running. Actually, both he and my husband Ian reminded me to not talk to Natasha Wodak too much during the early stages of the marathon because they know how chatty I can be.

CK: Between the two of you, it could have been dangerous – sage advice. Back to the marathon, can you take me through the race? What were you thinking around 10K versus 35K?

KM: I was lucky enough to have superstar Natasha Wodak pace me for the first half of the race. In the beginning, the pace felt very relaxed (as it should in a race that long). Around 15 or 16k, I remember exclaiming “this is so much fun!” to Natasha and Leslie Sexton. They both laughed at me, and Natasha said: “it’s fun until it’s not.” Wise words from her, but I was lucky enough to feel really good the whole way. Even though there were moments where I felt tired, I never hit the proverbial “marathon wall.” I really think this indicates that I have a lot of room to grow from here in the marathon, which really excites me!!

CK: What are your short-term goals – next spring?

KM: Next spring, I would love to run fast on the track and the roads. I hope to lower my half marathon PB and to run a big PB on the track as well. There are some road races, like the Sun Run, the Payton Jordan Invitational and the Ottawa 10K Championships, that I really want to put on my calendar.

CK: Will you attempt the IAAF World and or Olympic standards going forward?

KM: My long-term goals are to represent Canada on as many international teams as I can. I believe the marathon Olympic A standard is 2:37, but I definitely want to continue to lower my time as I gain experience. I think there is a ton of room for me to grow and learn, and I am excited to see where that takes me!