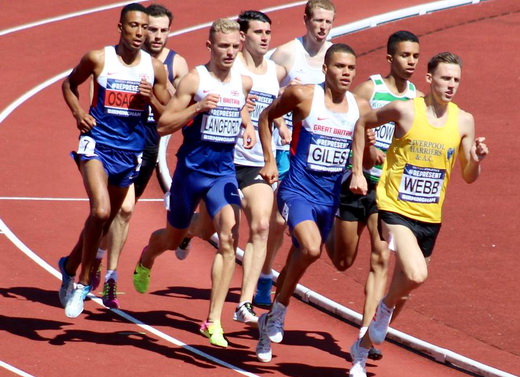 British 800-metre specialist, 21-year-old Kyle Langford, raised a few eyebrows during the 2017 London IAAF World Track and Field Championships, by finishing fourth in the final and just.04 of a second from the bronze medal position.

In that race, he set a new personal best time of 1:45.25, but getting there was precarious as he finished as the second slowest to get out of the preliminary heats with his 1:46.38 performance. He improved his prospects by finishing second to Canada’s Brandon McBride in his semifinal heat, to move on. The two finished in 1:45.53 and 1:45.81, respectively.

The 800-metre event is often considered the most competitive in sport. In the final, Langford had the slowest personal best of the eight runners. He was up against Nijel Amos of Botswana with his best of 1:41.73 and Ethiopian Mohammed Aman who has run as fast as 1:42.37. At a glance, it appears Langford had no chance. He beat both of them.

Langford started running in his late teens and is a very low mileage runner. Even now as a world championships fourth-place finisher, his mileage is low at 30-kilometres per week.

Christopher Kelsall: In that final race in London, would you suggest that you held back a little being unsure if you could mix it up with the field or did you just leave the final sprint too late?

Kyle Langford: It’s a funny one.  I was a little bit unsure of what I should be doing. I would have liked to have been further up the field, going into 200m-to-go, but I know the pace I was going and what my coach said I should have been hitting, so it was more about knowing what I’m capable of more than anything.

CK: Your performance was the best British showing since before you were born (‘96) going back to 1993. With Laura Muir, Lynsey Sharp and others, do you feel Great Britain is having a bit of an athletics resurgence in mid-distance – despite the lack of medals?

KL: One-hundred percent. I think even look away from Muir and Sharp, you got youngsters coming through, the British 800m men’s has been the strongest it’s been for a long-long time with loads of youngsters running fast. The European junior team won the championships again so we have lots of good young athletes in all departments and I think they should be the focus on bringing them through.

CK: You mentioned that 1:45 doesn’t do you justice. Will you carry on your 2017 season to see what you can do with that time?

KL: I’m not too bothered about running much faster. It really doesn’t matter at all. No one cares what time you run. People remember what you do at the main championships. For me, the rest of the season is just me trying to have fun and enjoy my last races, everything in my mind now it about getting back to training after my break and get ready to win a Commonwealth Games medal.

CK: Will you run cross-country?

KL: It’s a funny year next year as the Commonwealths are in March so in a few weeks I will have a sit down with my coach and manager and decide what is best for 2018.

CK: Apparently, you were training just 15-miles-per-week as a teenager, but performing at a 1:48-level, which seems incredible. What did your training look like this past year?

KL: I was running 1:45 off less than 20-miles-a-week and I was still a teenager competing in seniors and training has been a little bit of a weird one this year, I went to lots of high-altitude training camps and didn’t have a coach overseeing any of my training. It was me, all on myself as a 20-year-old with no experience to structure my own training. It wasn’t until March where I moved to Coach Jon Bigg who is there as a full-time coach to implement a schedule, longer runs, plyos, tempos and rest days in my training schedule. It was a massive structural change. But it was a massive step for me becoming a professional athlete and I can’t wait to have a full winter training with him.

KL: I grew up in Watford just outside of London and I played football for the school but would play football all the time with my friends from morning to night and I remember walking home from the AstroTurf and my feet and quads would be killing me. I was so tired and thirsty. Next day the same thing and we would do this every day of the week in summer and after school. I really think that was a massive part that made me so good at running, it just gave me a massive base.

CK: Shaftesbury Barnet Harriers is a pretty legendary club, having been around since 1890 and having some good talent there including the legendary Dave Bedford. Do you get a sense of history and feel responsible to perform well wearing the kit?

KL: Yeah I love competing for SBH; they are a great club and historic club. I would like in 20 years from now that they would have kids say that they “can’t believe the legendary Kyle Langford competed for my club” and that’s what I want. I want to create a legacy in the sport. I want to change it for the better and prove to anyone that it doesn’t matter what background you come from, you can do whatever you want if you put your mind to it.

CK: Is your family active in sports?

KL: I have a sister who used to compete and I think she’s looking to get back into the sport soon. My family has always been good at sports so it’s something that runs in my family’s blood!

KL: I just want to keep making finals and winning races. The 800m is such a demanding event especially when you have three races in four days. They say the 800m is the hardest event to make a final in but it’s one of the easiest to medal in.