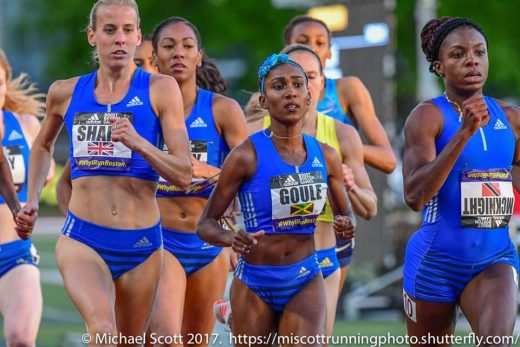 Twenty-seven-year-old Scottish middle-distance runner Lynsey Sharp is currently enjoying being a part of the resurgence in Scotland’s and Great Britain’s rise back into global athletics prominence.

She is the 2012 gold and 2014 silver medallist in the European Championships. She is a two-time Olympian, having competed in both the 2012 London and 2016 Rio Olympic Games.

She earned a silver medal at the 2014 Glasgow Commonwealth Games.

Sharp is an 800-metre specialist with a personal best of 1:57.69, which is the third-fastest performance all-time by a British woman and the current Scottish record. She set the time during the Rio Olympics Games. Her best indoors time came in Boston in 2016 and is 2:00.30.

She is the daughter of two very accomplished runners in Cameron and Carol Sharp (nee Lightfoot). Cameron was an international sprinter, while Carol competed in the 800-metre distance event.

Christopher Kelsall: You grew up in Lochmaben, yes? What was life like growing up in small town, Scotland?

Lynsey Sharp: I was born in Dumfries and we lived in Lochmaben but we left there when I was about 18 months and moved to Edinburgh. My dad had a car accident when I was one and we had to move to Edinburgh for his rehab in a brain injury hospital in Edinburgh. I don’t remember life in Lochmaben although I have been back to visit a lot throughout my life. I loved growing up in Edinburgh and think I am very fortunate to call such an amazing city home. Life would definitely have been very different if I had stayed in Lochmaben.

CK: Which sports did you play as a child and when did you get into running with keen interest?

LS: My parents made it that so I had opportunities to try all different sports growing up. I was too young to join the athletics team so I went to gymnastics at the same venue while my older sister was doing athletics. I didn’t last long as gymnastics (got bullied because I had shorts and t shirt on and everyone else was wearing a leotard!). I spent all my summers at kid’s camps playing different sports all day. I also played hockey at school until I was about 15.

CK: Your parents were excellent runners. Was athletics just a natural progression? Did you grow up near the track and cross-country race venues?

LS: Athletics was what I always wanted to do. I grew up knowing what my parents had achieved. I saw pictures of them and watched videos. We grew up playing in sand pits and playing in the puddles in the shot put circle at Meadowbank whilst my mum coached and trained.

CK: You won gold and silver in the European Championships in 2012 and 2014 in Helsinki and Zurich. Would you say winning silver in the Glasgow Commonwealth Games was at least as rewarding because you raced at home?

LS: Glasgow 2014 was definitely a very special moment. The journey I went on the 12 months leading into Glasgow made the medal so special. I had surgery on my foot to remove the Plantaris tendon in Sept. 2013, it got infected and I had an open wound all the way through until after Glasgow 2014, I also got norovirus the night before the final in Glasgow so it was a real battle to get the medal. To be able to do so in front of a home crowd was a dream come true.

CK: What sort of trainer are you? Do you come more from the speed (quality) end of the spectrum or are you more of a volume advocate?

LS: My volume is very low. My mileage is roughly 30 miles a week. Most of my training is made up of track work. I’m on the track most days in the summer. Winter my longest run is still only about 45 minutes.

CK: Athletics in GB seem to be having a bit of resurgence, especially with yourself, Laura Muir, Kyle Langford and others. Do you get a sense that there is a renewed focus in the sport?

LS: It’s really exciting to be part of this generation. During my mum and dad’s era Scotland was a strong force on the world stage and we are getting back and exceeding that now. Everyone wants to know the reason for all the Scots breaking through; I think it’s just that we are all tough.

CK: You own the Scottish 800-metre record with your run in Rio. Did you think in advance that you were capable of that time?

LS: Yes and I know I was and am in even better shape than that. With the women’s 800 being so strong globally at the moment and fields being so large (up to 14 people) it can be hard to get a clear run. Fast times will definitely come!

CK: Will you make an attempt at the British record of 1:56.21 that Dame Kelly Holmes set 22 years ago?

LS: I have had my eye on that for a while. 1.56.21 is incredibly fast and it will take a big run to break that record but I am certainly capable of it.