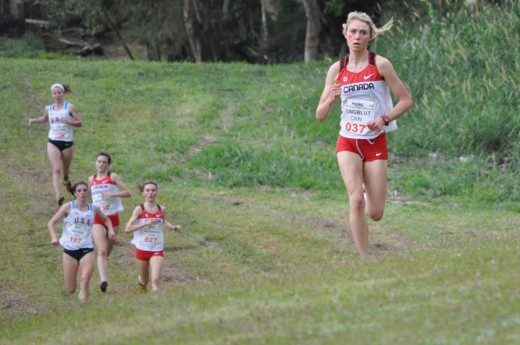 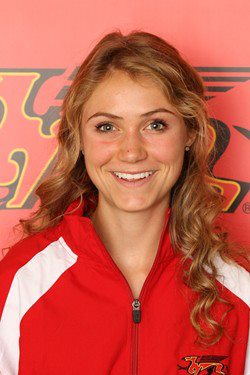 Madeline Yungblut is a distance runner who competes in the Canadian Interuniversity Sport (CIS) for the number one ranked University of Guelph Gryphons.

During 2012, she competed in the IAAF World Cross Country Championships in the junior event. She led team Canada to a ninth place position while finishing 46th individually. The eighteen-year-old helped the Gryphons defend their national titles in cross-country, indoor and outdoor track during the 2012/2013 season and seeks to do the same for 2013/2014 season.

Christopher Kelsall: There are shopping malls bigger than Wroxeter, Ontario. What was it like to grow up there? Is there a school in town?

Madeline Yungblut: Ha-ha, no school in town. My high school was about twenty minutes away in a larger town called Wingham. Growing up in a small town had both its positives and negatives, but on the whole, it was a great place to be. It was the type of town where everybody knows everybody and has a really friendly feel to it.

CK: What are some of your interests besides athletics?

MY: I really like to cook, and especially to try out new recipes. I’m one of those people that gets really excited when the newest edition of Food and Drink from the LCBO (Liquor Control Board of Ontario) comes out!

MY: I couldn’t agree more! I love just to put music on and cook.

CK: Do you watch the reality chef programs on TV?

MY: I do every now and then, but I’d prefer to just cook on my own.

CK: Guelph must be about an hour’s drive away? Was it an easy decision to go there due to the proximity to Wroxeter?

MY: Guelph being close to Wroxeter was just an added plus. I would have gone to Guelph whether it was hours away, or right next door. It had the program I wanted, and I knew I wanted to be a part of this team! I found I could easily relate to their style of training and dedication, and adjusted fairly quickly when coming here. There are so many good things happening in the running community in Guelph right now, and I just simply wanted to be a part of it.

CK: How is your fitness with the start of the cross-country season upon you?

MY: I had a stress reaction in my foot in August, and was about four weeks off my feet. But I was able to start up again slowly early September and found the transition back relatively smooth. I’m feeling pretty good right now and I think the bit of time off was exactly what I needed to mentally refocus.

CK: Were you raced out, sort-of-speak, before the stress reaction?

MY: No, actually I was in a great head-space, and Dave (Scott-Thomas) and I had been pretty careful not to do too many races this track season. I was feeling great mentally and not tired out.  I guess I had just put a little too much stress on my body over such a long track season. I got the stress reaction just before I was supposed to race the 5k on the track at the Pan American Juniors in Columbia, which had been a goal throughout the season. We had adjusted and were working to try and take it as a good lead into cross-country season, so I was feeling quite fresh and ready to go. It was just my foot that let me down, but we caught it early, acted on it fast, and I’ve been back to training some for a few weeks now.

CK: Last year’s CIS championship meet the Gryphons earned the lowest score of 21. With the team you have around you this year, are you looking to better that score, or simply win?

MY: We are looking to better that score, and I think we can if everyone continues to be healthy and in the right zone. We lost a few key players this year, but overall the remaining team has grown a lot – especially in trust, confidence, and fitness, and I think we are stronger now than ever.

CK: Can you describe your race in Bydgoszcz, Poland at the World Junior Cross Country Championships?

MY: Racing this year in Poland was really exciting, mostly because there was this fantastic energy there – not just from the racers, but in the crowd too. I was really honoured to be wearing the Canadian singlet, especially since it was only my second time racing internationally. The race conditions weren’t good – the course was covered in ice and snow, but that just added to the challenge! I had a tough start but managed to stay relaxed and just worked my way up to where I wanted to be. The junior women’s course was 6k, which was to my advantage, so I was able to make up a lot of ground in the last 2k of the race. Overall it was a fantastic experience!

CK: Why was it to your advantage?

MY: We had been adjusting my training over the last year to focus on the 5k on the track for outdoors this past summer, so I was ready for the extra km in Poland. I’ve built a pretty big base from a lot of mileage over the past few years, and I can really find my stride when it comes to the longer events. I find the longer the race is, the easier I can stay relaxed, smooth, and focused mentally.

CK: How did your weekly volume change from high school to university?

MY: I built a lot of base while in grade 11 and 12, and then increased my percent quality when I came to Guelph. My volume has just been steadily increasing for the last few years, and there was no drastic change between high school and university, which helped make the transition easier!

MY: I certainly do think that the CIS is getting more competitive and that we are often underestimated. However, I can’t say whether or not we are ‘as good’ on the whole as the top half of the Division 2 U.S. schools, and I’m sure it changes from year to year. I do know that Guelph has been competitive with some of the Division 1 schools in the past and that Canada does have the potential to prove the quality of distance runners here. We just haven’t really had the chance or financial support.

CK: And of course there is the whole debate about what if Canadians competed within Canada. For example, look at the talent of athletes like Sheila Reid, Cameron Levins, and Mo Ahmed.

MY: I never really considered going to the states because I felt I could get to the level I wanted to be in Canada. I wouldn’t want to be training anywhere else right now; I have everything I need here in Guelph: great trails, great track, awesome training partners, and a coach that I trust and I know can get me somewhere. As for getting the ‘NCAA experience’, we still go down and race in the states. I think that a lot of Canadian runners are underestimated. We don’t have the same funding options, and it can be very stressful for the athletes. Our national teams are mostly self-funded and as a university student, that certainly makes a big difference!

CK: Montreal Endurance predicts Gryphons will finish first but this time Western second and Victoria third. Which school do you think will provide the best competition?

MY: In my opinion, both teams have their strengths and it could be either one on race day. Whoever is in the right mindset, healthy and ready to go could put up a good fight. I think this shows the increasing depth in the CIS, our teams, on the whole, are getting stronger!