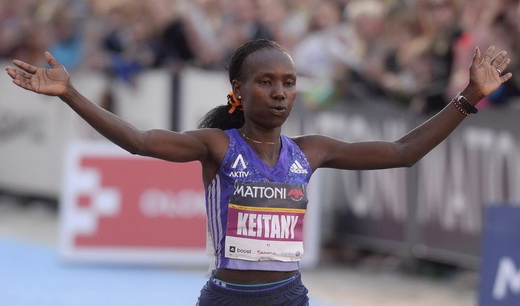 Kenya’s Mary Keitany is looking to bounce back to her former fitness levels sometime in 2014. She gave birth to her second child in 2013. The 31-year-old is the third-fastest marathon runner in the world with a personal best of 2:18:37, which is the fifth-fastest time in history behind number one Paula Radcliffe of Great Britain and her top three results of 2:15:25, 2:17:18 and 2:17:42. The second-fastest woman is Liliya Shobukhova of Russia with her 2:18:20. Keitany ran her best at the 2012 London Marathon.

The first seven all-time results were run on either the London or Chicago courses. Radcliffe’s fastest time was run with male pacers, which controversially was temporarily removed from the record books by the International Association of Athletics Federations (IAAF) – the sport’s worldwide governing body.

She has twice won the London Marathon.

Christopher Kelsall: Will you be moving back down to the 5000 and 10,000-metre distances, to try to match your world record half-marathon performance level?

Mary Keitany: Before stopping for my second pregnancy I was a top-level marathon runner, so if my body reacts properly to the training I intend to return just like that in 2014. I broke the world 21k record while I was preparing for the 2011 London Marathon. Moving back down to 5000 and 10,000m would not improve my performances at the longer distances. So no I will not move down.

CK: Are you interested in competing in the Commonwealth Games in Glasgow? Or will you focus on a big city marathon for spring, like London or Chicago or NY in the fall?

MK: Representing your country is the biggest satisfaction for all athletes, and so is mine. I would not compete on track so the only option would be the marathon, but I don’t think I will be able to run 42k in top levels before the fall of 2014.

Right now I don’t know which one will be my first marathon, I need to see first how my body responds in training, then around March/April I will decide my plan together with my coach and my manager.

MK: I would like to compete in the marathon, in order to finally win the medal that I left behind in London. But for the moment I must start training seriously from the beginning of 2014.

Being born in Kenya means being easily between the 10 best marathon runners in the world, but not between the best 3 of your country; the risk of ending up watching the competitions on TV is higher!

CK: In response to your comment last year regarding Paula Radcliffe being paced by men in the marathon to her world record, would you like to try running with a group of men at 2:15 pace to see if you can compete with that time?

MK: Never say never, but realistically speaking, my main goal is to beat Radcliffe’s 2h17’42” world record in a women’s race, which is 55 seconds far from my personal best.

CK: Your son is five-years-old now, yes? Will he be walking and running to school next year? How far will he have to go?

MK: Times are changing fast, also in Kenya. Jared will start elementary school in January 2014. He will take the school bus to reach the school, which is about two kilometres from home!

CK: At what age did you discover that running is something you should seriously pursue?

MK: I don’t remember exactly which age, but while I was attending elementary school I took part in a few races without having run before and still I made a good impression! Since then I understood that if I had trained I would have had quite a good talent for running.

CK: How is your training going at this present time? Are you injury-free and putting in good mileage?

MK: I still don’t run a lot and I try to pay attention to what my body is feeling. In any case, I don’t do more than one session a day and for the moment I never do more than 14/15 km each session. Only in January I will start gradually increasing the quality and quantity of my training. I still need to lose some weight and I don’t want to risk an injury at this stage.

CK: What weekly volume of training do you get up to? What does a typical off-season week of training look like?

MK: I honestly have no idea of how much volume I have run in the past weeks, as I said before I don’t keep a daily record. I train according to my sensations. When I was in top shape my season was based on two marathons, one in the spring and one in fall.

After each marathon I used to completely rest for two weeks, followed by two weeks of slow running – increasing the volume in the second one. After about a month I would then restart the preparation at full training pace.

CK: How much of your training do you do by feel, without the use of a watch or heart rate monitor?

MK: My watch is always with me, I use GPS Garmin in qualifying sessions so that I can better check distance and speed. I never use a heart rate monitor.

CK: Are you a lifestyle runner, meaning aside from training to compete at an international level, do you and will you continue to enjoy running, or do you run specifically for career purposes?

MK: Running was my job and it will soon be again. Honestly, I don’t think I will still be running once my career is over but ask me this question again in about six years and I might reply differently.