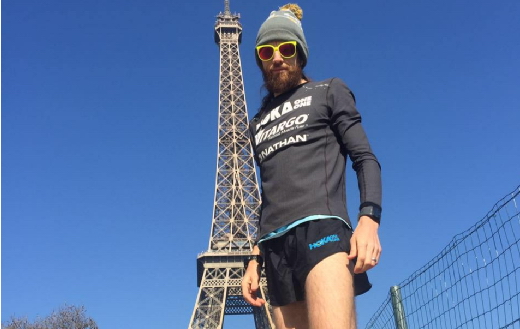 Arlington, Virginia’s Michael Wardian is one of the top ultramarathon runners in the U.S. He is also a strong marathon runner and races the distance frequently.

Interestingly, the Michigan State University grad didn’t start running seriously until after graduating. He is now an international ship broker.

In January 2017, Wardian ran seven marathons in seven days on seven continents in a record average speed of 2:45

Christopher Kelsall: Congratulations on the Leadville-Peakes double. Will you try that again? Or are you glad that it’s done?

Michael Wardian: Thank you so much and I would love to try and do something similar to Leadville and Pikes Peak. I am definitely excited about how it turned out and still can’t believe it happened like I imagined.

CK: Can you take me through the two races?

MW: Leadville was my first time being there and I have only done a handful of high altitude races so I was very curious how it would go. I started under control and I knew that I just need to manage my effort but keep pushing. My legs were solid but I was bothered by bathroom issues which started at the beginning of the race and stayed with me the entire day. I ended up using the bathroom more than 14 times during the day, which took a lot of out of me and just slowed me down. I had some super low patches but I kept fighting and held it together.

As far as Pikes Peak, I knew my legs were gone and I was really worried about my stomach so I didn’t really eat before Pikes Peak and figured I would just rely on aid station foods and that is what I did. I was superpedestrian on the way up Pikes Peak as my legs had no power but I was able to recover during the run and push on the downhill. I was so pumped to be able to break the record of Marshall Ulrich and achieve something so memorable.

CK: Any other epic ultra runs that you must tackle before your career is over?

MW: I have so many big events I would love to do. Some things I am looking forward to are: running the UltraGobi in China, the Everest Trail Race, running the Panama Canal, running the C&O Canal, Lavarado 105K, Grand Canal, Spartathlon, Ultravasan 95K, Paris Marathon, Rome Marathon, Copenhagen Marathon, running again in Iceland, New Zealand, the Iditarod in Alaska…

CK: Don’t stop there, what about Badwater or Barkley Marathons?

CK: Would you suggest that because you train at a reasonably steady volume of mileage and race often that you actually avoid injury where many athletes appear to invite injury with varying degrees of volume and intensity?

MW: I think that each athlete is very different and what works for me is unique to what I am doing and every athlete should try to see what works for them.

CK: You played lacrosse in the NCAA (in case you forgot). How did you make that seemingly late transition from an intense team sport to the more pastoral marathon and ultra-marathon running?

MW: I did play lacrosse and still think of myself as a lacrosse player but now I just run and do so at a high level. I made the transition from lacrosse to running when I stopped playing lacrosse my junior year at Michigan State University. I just wanted to stay fit so I picked up running because it was cheap and fast and fell in love with how it made me feel.

CK: Still a Spartan at heart?

MW: I am definitely a big fan of Michigan State University and all the people that I know from there.

CK: Did you play much box lacrosse?

MW: I did play box lacrosse a lot. I played from the time I was in about eighth grade all the way through college and I loved it. Very physical and made me into a much better athlete and all-around lacrosse player.

CK: Ever have visions of playing boxla in the NLL, WLA or OLA?

MW: I did want to play at the highest level in lacrosse and really did at the time I was playing but now I am focused on being the best runner and endurance athlete I can be.

CK: What other sports did you play growing up? Were you an active child?

MW: I played a lot of sports growing up, soccer, swimming, cycling, wrestling, and Aikido.  I was definitely super active but also very focussed and when I decided to become good at something I was committed.

CK: What sort of cycling?

MW: I just cycled around, I didn’t do any formal racing but I would go on these huge rides for a kid when I was 11 or 12, I biked about 20 miles (32K) from Oakton, VA to Washington, DC…I remember being so proud I made it.

CK: Is the Maersk Alabama cursed? Did you see the movie? What did you think of it?

MW: I definitely don’t think the Maersk Alabama is cursed, it was just unfortunate circumstances but I did see the movie and I thought they did a very professional job of capturing the intensity and drama of the situation.

CK: Hasn’t it been boarded several times by pirates? Is that a navigational judgment issue? Would a captain not own that?

MW: The Maersk Alabama was only boarded by pirates once but it is not a navigational issue but more a destination issue, in that the cargoes that are being carried are for discharge ports in a dangerous part of the world. The captains are top-notch.

CK: As a vegetarian, have you experimented at all with the newly re-popular Ketogenic or low-carb, high-fat diet?

MW: Yes, I have experimented with a low-carb, high fat diet but I didn’t love the way it made me feel. I am definitely a lover of carbs at this point in my life and for what I like to do I think works really well.

CK: As a marathon runner (2:17 days) and now as an ultra-runner and master, what sort of training volumes did you get up to then versus now and what does a typical training week look like for you?

MW: I am usually between 70-110 miles per week (112-178K) but I have a range of peaks and dips through the year. My training normally is before work or running to work, another workout at lunch and then running or biking home during the week and on the weekend if I am not racing, I am running with friends for a few hours.

CK: Was breaking the record for a treadmill marathon torturous?

MW: I love treadmills and records so it was not torturous at all.

CK: I call them treadmonsters, ever try the beer mile?

MW:  I just did my first and probably last beer mile a few weeks ago, my brother, Matthew and I were doing it to see who would win, I barely beat him going 7:33 and he was 8:10…we both didn’t love it and I don’t plan on doing another beer mile anytime soon but it was really impressive to see people compete in them…

MW: 2018, should be another spectacular year, I am still trying to finalize my schedule but believe me if all goes as I hope it will be as epic or more incredible that past year.  Thank you so much for the interview and support.