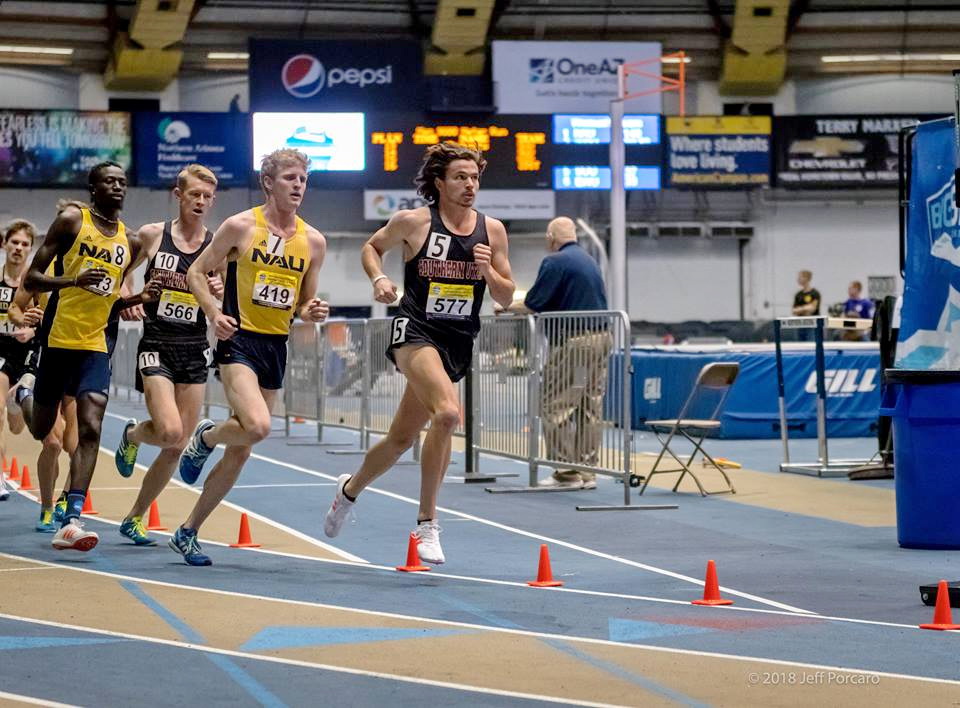 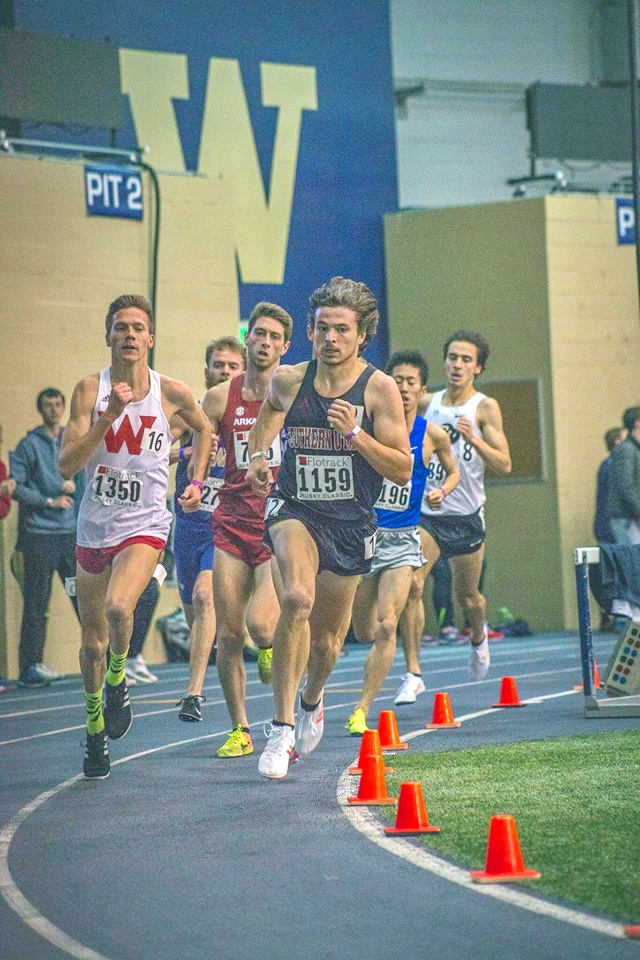 Quietly it seems, Heatherton, Nova Scotia’s Mike Tate took down fellow Canadian Cameron Levins’ Southern Utah University school record for the indoor 5,000-metres. He ran to a 13:37.12 in his final indoor season in 2018, which he describes below.

Tate since graduated and now trains in Guelph, Ontario under the guidance of Dave Scott-Thomas. Scott-Thomas or DST is known for coaching much of Canada’s top talent over the past two decades including Reid Coolsaet, Eric Gillis, Taylor Milne, Genevieve Lalonde, Tristan Woodfine and Rob Watson, to name a few.

Levins, from Black Creek, BC on Vancouver Island, went on to compete in the Olympics, IAAF World Track and Field Championships and medalled in the 10,000-metre event at the Glasgow Commonwealth Games. For a short stint, he also trained in Guelph but settled in Oregon under Alberto Salazar at Nike. He is now back with SUU Coach Eric Houle.

Tate is settling into his Guelph training environment and has some big goals to tackle, which we talk about below.

Christopher Kelsall: What was your very first memory of running for the purpose of running and thinking you were good at it or might like to tackle the sport seriously?

Mike Tate: I grew up loving to race. In elementary school, I used to spend recess and lunch racing other kids around the school. My phys-ed teacher also set up an after-school walk/run program. My siblings, my mom and I all joined. I remember being very competitive with my mom, trying to run further than her over the duration of the program. The first time I signed up for an actual organized race was the Antigonish Highland Games 5 Mile road race. I ran this for the first time when I was eight years old. Before being allowed to race, we had to prove to my parents that we could run the distance by running a 5km loop by our dairy farm.

CK: Smart teacher. Did you play any other sports then?

MT: I played soccer until high school and basketball until Grade 11. I had to end my Grade 11 season and basketball career a little early because I broke both of my wrists during the third game of the season.

CK: What positions did you play in the two sports?

MT: I started as a striker in soccer but then got moved to right wing. I was basically an extra defender and striker on the far right side. I did a lot of running up and down the field because it took me a little longer to tire than most players. In basketball, I was a guard, didn’t really have the size to be a forward.

CK: Did you get to watch much of this summer’s FIFA World Cup? Who were you cheering for?

MT: I did get to watch a lot of the knockout stages but not as much of group play as I have in the past. My mom’s family is Dutch so I have always been a Netherlands supporter but this year that wasn’t an option. I guess I jumped on the bandwagon and was all for “it’s coming home” and cheering for England.

CK: Does anyone else in your family run or do other sports?

MT: My mom has always run. Growing up my older sister played some basketball and my brother and younger sister both ran all through high school. My brother ran for St.F.X. For four years. He has a few individual AUS titles to his name.

CK: You ran out the full program at Southern Utah University. Looking back, how would you assess your experience there?

MT: I loved my time at SUU and I am extremely grateful for the opportunity I was given. I learned a lot about training and about what my body is capable of. Coach Houle really pushed and challenged me over the past five years. He also always believed in me. From the time I went on a recruiting trip, he told me he could turn me into an All-American and have me contending for NCAA titles. He had some unorthodox training programs but assured us if we trusted the process and bought into the program, it would work.

CK: You are now working with Dave Scott-Thomas. I assume there are some similarities to Houle, especially mileage volumes. What made you choose Guelph, which is still a long way from home in Heatherton, NS?

MT: Dave and I haven’t discussed training or mileage volume too much yet. So far it has just been building a base and getting back into shape. However what I have done so far and from what the guys have told me about some of their workouts, there are overlaps and similarities.

I chose Guelph because it has a great training group with people of all different disciplines. I really like the diversity of the group. Guelph has some great trails as well. Dave and I also share a similar vision on what I want to accomplish in the sport and how I want to get there. It’s funny you mention Guelph still being a long way from home; I actually view it as quite close after living in Utah for five years. I’m only a two-hour flight from NS now, where I used to be a six-hour flight, layover, and then another two-hour flight just to get to Halifax, which is still two hours from Heatherton.

CK: During this base period what sort of mileage volume are you running? What did you get up to at SUU?

MT: My biggest week so far was last week where I hit 100 miles. My biggest at SUU was somewhere between 120-130 miles, I don’t remember the exact amount.

CK: Breaking fellow Canadian and Olympian Cam Levins’ 5,000-metre school record with your 13:37.12 performance, did you see that coming? You must have had an idea going in to attack that hard. How did that feel?

MT: I was confident I was in fairly good shape. I knew it would depend on how the race played out and if I could stay relaxed and out of trouble for the first half of the race. My main target in that race was not to break Cam’s school record, even if it was in the back of my mind, but to qualify for NCAA Indoors. The pace was honest from the start and a couple of professional athletes broke off the front of the pack with about 3km to go. I stayed in the pack with the rest of the NCAA athletes. With about 2km to go, I found myself at the front of the chase pack and decided to try and slowly wind up the pace for the rest of the race. I think it also helped to have athletes off the front to try and run down. When I heard my split with 400m to go I knew I had a chance at Cam’s school record and an NCAA leading time. I really started kicking hard and I could tell the athlete out front was coming back fast. I caught him with just less than 200m to go and continued to push to the line. When I finished and saw my time I was extremely happy with my race. It was the first time I had qualified for an NCAA track finals, and to break Cam’s school record and run the fastest time in the NCAA were huge unexpected bonuses.

CK: Will you be racing much cross country this year?

MT: I want to race cross country. Being finished with university makes finding races a little more difficult but I definitely want to be on the start line in Kingston (National club championships).

CK: Do you get to run much with Reid Coolsaet and Eric Gillis? Of course, Gillis is from Antigonish near Heatherton.

MT: I got to run quite a bit with Eric when I was home in Antigonish for Christmas last winter. It was great to run with such an experienced runner. He’s the one who gave me a preview and rundown on Speed River and got me to start seriously considering moving here once I was done with university. As for Reid, I kind of did part of a fartlek session with him and a few other guys when I was in Guelph checking it out, seeing if I wanted to move here. I say kind of because I wasn’t in the best shape and those guys had no mercy on me and dropped me hard. Since I have moved to Guelph, I haven’t had the chance to redeem myself but I was talking to Reid in Hamilton at one of the twilight meets. He was asking about how the move went and mentioned he may try to drive up to Guelph for a couple tempos during his build for STWM.

CK: Are you sticking with the 5,000-metre for the foreseeable future?

MT:I don’t think too much will have to change. I think I was on pace for that after this past indoor season before I unknowingly got mono and ran through it during the start of outdoors. But also just transitioning from a collegiate to post-collegiate athlete will allow me to have more control over my racing schedule and be more selective of when and where I will race. I believe that could help drop some time off.

CK: What are your 2019 goals? It’s an IAAF World Track and Field Championships year coming up and Canada is fairly thick with athletes around your ability or better including of course Mo Ahmed, Justyn Knight, Ben Flanagan, Cam Levins and Luc Bruchet, to name a few.

MT: I want to run a PB in the 5,000m and run Worlds standard at that distance. World Track and Field Championships is also a goal but like you said Canada is getting very deep at that distance. Simply running standard is no longer good enough. Mo, Cam, and Luc are all Olympians over 5,000m, Justyn Knight is a World Championship finalist, and Ben Flanagan has shown this year to never count him out. If I can run standard and compete with the likes of these guys at nationals, it would be a successful season, but obviously I want the honour of representing Canada at Worlds just as much as everyone else.