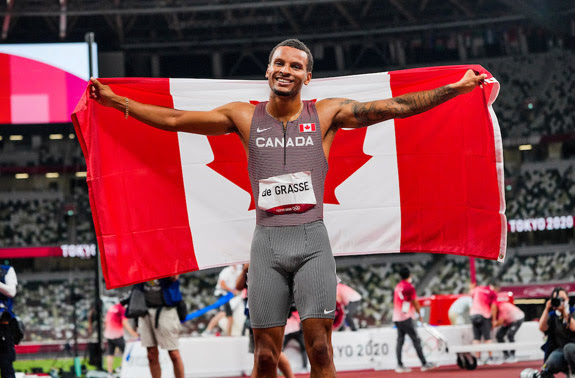 You saw them race for the brass ring in Tokyo last week; they are back. Some of the top athletes will continue to take advantage of their state of fitness by racing in the Wanda Diamond League (DL) meet taking place in Eugene, Oregon on Saturday, August 21.

Prefontaine is the eighth meet of the season for the DL. The event provides the opportunity for new personal, national, or even world records to be achieved, as well as to better a fellow competitor from Tokyo.

Men’s 200m gold and silver medallists Andre De Grasse and Kenny Bednarek will go head to head again at Hayward Field, while Athing Mu (gold), Keely Hodgkinson (silver), and Raevyn Rogers (bronze) will face each other in the 800m.

Mu is coming off of an outstanding Olympic gold-medal performance having set a world U20 and national record in the 800m event with her 1:55.21 finishing time. That performance is the 24th fastest in history, which is a stunning achievement for the 19-year-old Trenton, New Jersey native.

British runner Hodgkinson, also just 19 years of age, took silver in Tokyo in the time of 1:55.88 – a British record. Rogers earned bronze in the same event clocking a 1:56.81 result. Will the finish order be the same or are Rogers and Hodgkinson hungry enough to give Mu a taste of her own medicine. The friendly rivals will put it all out there in the Pre, as the professional races are more typically, straight up fast.

Dutch athlete, Sifan Hassan, three-time medallist from Tokyo in the 1500m (bronze), 5000m (gold), and 10,000m (gold) will take on silver and bronze medallists Hellen Obiri of Kenya and Gudaf Tsegay of Ethiopia in the 5000m. Back-to-back Olympic 5000m silver medallist Obiri, who clocked a 14:38.36, may want a little redemption on Hassan.

Tsegay earned bronze in the time of 14:38.87. She will be looking for a faster result against Hassan and Obiri and what better time to go after it in a speed-oriented race against an athlete who surely must be fatigued by now in Hassan after six races in eight days?

All three medallists from the men’s 5000m race, World record holder Joshua Cheptegei (gold), Canadian record holder Mo Ahmed, (silver), and bronze medallist, Paul Chelimo, will also be racing. They will be dropping down to the rarely run 2000m event.

In the men’s shot put the USA’s Olympic gold medallist, Ryan Crouser, will be hoping to add a first career Diamond Trophy to his shiny new Olympic gold medal before he ends his season. He will take on fellow medallists Joe Kovacs and Tom Walsh, who is looking to defend his Diamond League title this year.

See all the details on the Prefontaine Classic here>>