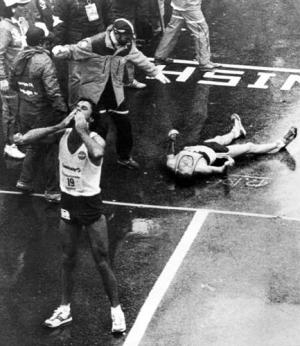 Rod Dixon holds court five minutes from downtown Victoria in a rain-soaked, gravel parking lot at the back of the Cedar Hill Recreation Centre. He has an enraptured audience; a handful of early-arrival runners who have come to spend six hours listening to him talk about the finer details of training. He is here as a representative of the Lydiard Foundation, along with co-founder Nobuya, ‘Nobby’ Hashizume.

On first meeting Rod Dixon at 6:30 a.m., one would be remiss to blame him for being a bleary-eyed guest however, he is anything but that. After all, he is a much-travelled Kiwi with an American address or two—he gets around. He is highly engaging, entertaining and perpetually energetic, talking with his hands in smooth sweeping gestures. He lights up the early morning grayness with his giant, ivory grin; he seems more rock star than running legend.

Rod is tall compared to your typical world-class, long-distance runner and seems younger than his actual age. The group collectively chuckle at his good-natured stories. During our subsequent lap of the cedar chip trail, Dixon continued to be a storyteller, making the run seem shorter than it actually was.

Dixon is often referred to as, ‘the most versatile runner ever’. Although some could argue this point, any debate comes to a screeching halt when one considers his versatility when also taking into account the longevity of his career.

Dixon is a two-time World Cross Country Championships medallist and an Olympian with a bronze medal in the 1500-metre event. In his very first steeplechase race in 1974, he set a national record with an 8:29. He also ran a 2:08:59 marathon (personal best), with his stunning, 1983 New York City Marathon victory.

I recently watched that marathon in its entirety, which also included Lorraine Moller, Greta Waitz, Alberto Salazar and Geoff Smith.

Watching the 1983 New York City Marathon was not dissimilar to watching an Alfred Hitchcock thriller. As the race footage rolls along, it covers an unaware leader, Geoff Smith, gradually and methodically being hunted down by Dixon. The pick-off was timely in that over the 26.2-mile course, he catches Smith and slips past him with just a few hundred metres to go. The carnage in the chute: Geoff Smith on his back, splayed prone on the asphalt, defeated and exhausted, while Dixon stands with arms raised, heaven-ward.

Dixon is nearly as infamous for his incredible running career as he is for his appreciation of a good brew. Knowing this and having my own appreciation for the occasional wobbly pop, I welcomed him to town with a brew.

We have a local microbrew here called Hermannator, arguably the finest double ice-bock beer in the world. I stole from my cache a red nylon first aid kit, complete with a white cross. I replaced the contents with a six-pack of said, fine stout. Accompanying the kit was a letter from the “RCMP”, which stated that, “in accordance with Canadian Immigration and Visitation Laws, all guests to our country are required to familiarize themselves with the Canadian First Aid Kit.”

The letter quoted a federal law ordinance number, which contained disguised race numerology like 262208-59-83 which is 26.2 miles, 2:08:59 in 1983; the official letter provided further explicit and legal-sounding instruction, requiring the visitor’s attention. The hotel staff were accommodating in placing said kit on his bed, in plain view, so he would not miss it. A wanton act, but functional in its effect.

Later, when I arrived to escort the gentlemen to a popular local eatery, I was greeted in the hotel lobby with the happiest Rod Dixon that I could possibly anticipate. “Cheers mate, you had me going with that one, then when I opened the first aid kit I sat down and drank two straight up.”

This week I talked at length with Dixon from his home in Nelson, New Zealand. “Rod, thank you for taking the time to chat with me this morning.”

*note: Rod told me to phone him at 5:30 a.m. his time. “Yeah, no worries mate, it’s my pleasure really! Today is going to be another absolutely beautiful day. The sun will be coming up over the trees shortly. I can hear the birds are chirping now, it’s beautiful. Leaves are on all the trees, everything is fantastic. My daughter is getting married in a couple of weeks time, I’ll be off for that, can’t wait and I am happy to be on the phone with you now – ready to roll. Listen how are you doing?

CK’s note: God help me. I’ve contacted the most effervescent man on the planet, who cheerily orates in soft undulating rhythms, replete with visualisation, painting colourful images of an ‘Eden’ of sorts. I can picture him resplendent in maroon smoking jacket with a cuppa, surrounded by finches, pecking seeds from his shoulders while his voice, in Keith Richard’s timbre, gently flows.

CK: If I remember correctly, you said that you ran the 1983 New York City Marathon on a dare of sorts. As a middle-distance specialist and a world-class cross-country runner, what was going through your mind when you committed?

RD: It was New York City Marathon director, Fred Lebow. He was always asking me to run New York. I had said, “I have no plans to run a marathon.” However, he asked me every time I saw him, so finally, I just said, “if I medal in the World Cross Country Championships and I bother to run a marathon, I will do yours first.” So I ended up not wanting to do New York without experience, therefore, I ran the Auckland City Marathon in the early autumn, just to find out what it was all about. In that race in Auckland, I started out conservatively with Jack Foster who, incidentally with that race, wanted to become the first 50-year-old to run under 2:20:00. At some point on in the marathon, he said to me, “you better get going.” So I did and I gradually and progressively ran faster, until I won it in 2:11:21.

CK: Nice debut! How did the 50-year-old-Jack Foster do?

CK: You came to Victoria as a representative of the Arthur Lydiard Foundation, I understand you trained according to the Lydiard method however; you were not coached by Lydiard himself, who was your coach?

RD: I was coached by my brother John.

CK: You must have had an unusually good relationship with your brother to allow him to coach you.

RD: Oh yeah, I grew up always chasing him, as he was an excellent runner himself and 3 years older. So I was always trying to keep up with him as a kid and all his friends. In Nelson, at that time, we were very active, running everywhere. Even some of the jobs I had included running or being active. Everything we did seem to have included running or being very active. I delivered newspapers in the morning and milk in the afternoon, which also included plenty of exercise. Later on, my brother John, who also had the talent to make the Olympics made the most unselfish move, he decided to forgo his own running career to personally coach me. He even rabitted me in my Olympic 1500m qualifying race, where I did end up qualifying to compete in the 1972 Olympics.

CK: Your training environment in Nelson must have been a positive one while growing up there.

RD: Yes, our heroes were locals who also happened to be Olympic athletes, including Peter Snell, Barry McGee, Bill Baillie, Murray Halberg, John Davies and others. I remember in 1964 listening to my little transistor radio outside. The day was perfect. It was sunny, the birds were chirping, I sat in an inspiring spot with a view, listening to the broadcast of Peter Snell’s 800m gold medal victory in the Olympics. The broadcast was exciting and I really had to listen hard as the static came and went, it was an intense and influential moment. We had local heroes that set a very high standard, Sir Edmund Hillary was another. But my brother John was very much my hero. So as you can see there was plenty of motivation to do well if you wanted.

There was a time when Bill Bowerman brought his team down to take on the best of New Zealand. It was called the Rothman’s 4 x 1-mile International Tour or something. It was very ironic, that the relay was sponsored by a cigarette company. (laughs out loud) My friends and I waited outside the Nelson Hotel to get autographs. This is the sort of influence I had growing up.

CK: Later, you ran the Mahar Cup Relay, which is a local 4 x 400m race. I believe you participated for several years in a row.

RD: Yes I ran it nine years straight. Even as an Olympian, I said I was committed and I always showed up to race that event. It’s like my commitment to training. Stay the path! I was unshakable in my training and that is what one needs, that unrelenting dedication and commitment if you want to race at your very personal best, you need to be consistent and stick with the program.

CK: As former race director of the Auckland, Round the Bay Race, how is it that a city and a country of that size, hosts an 80, 000 participant race? Is there an obsession with running in New Zealand?

RD: It’s really a cultural thing now, thanks to Arthur Lydiard. As director, it was easy to tap into the fragments of what remains of that culture today. Per capita, it might be the biggest race in the world.

CK: Lastly, there has been much mention of Arthur Lydiard’s boys, the original group who first broke onto the international scene of running, which include names such as Peter Snell, Barry McGee and Murray Halberg. You were part of the second wave of international athletes to come out of New Zealand, which I guess created the aura of there being something mythical about Kiwi runners. This magic also happened in similarly, sparsely populated Finland, after Arthur Lydiard became their national coach. Lydiard was known to say that “Champions are everywhere, all you have to do is train them properly.” If this is the case then why do you think that countries with much greater populations did not win many more times the medals as New Zealand or Finland did?

RD: Well in Finland it was the Lydiard system in the late 60s. He was the coach of their coaches, which revitalized the whole running landscape for them. Strength is in the coaching if you don’t have the method and dedication, you don’t have the results, regardless of the size of your population. I very firmly believe it is all in the coaching, as champions indeed are everywhere. Before the political correct exemptions of today, everyone had to participate when we were kids. You would have to have a very valid reason not to be involved in the sports that went on at school. I have to say that the only disappointing thing that I have seen is the mass of people in some countries who have the talent but weren’t able to do something with it. Lydiard was correct in his statement ‘give me 100 kids and I can give you an Olympic champion.’

Rod Dixon is the CEO of KiDSMARATHON, which operates in conjunction with several international marathons. He also operates Rod Dixon Tours Down under – http://www.roddixon.com/